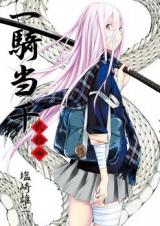 I wish that I could read the rest of Ikki Tousen manga
by Tig3rzhark
September 12th, 2019, 9:35am
Rating: N/A
I bought all of the Ikki Tousen (Battle Vixens) manga that was published by TokyoPop, and was looking forward to completing the entire collection. I'm disappointed to find that the rest of the volumes were never translated and released in America.

Maybe someone else can re-release it and do a better job than TokyoPop did in its translation.

The inability of TokyoPop to at least finish the translations, is really messed up.

I would have rated the series a lot better, if I could read all of it.

Honestly, I really hope that whoever wants to finish the translation, do a better job than TokyoPop
Was this comment useful?  Yes

:/
by Woah!kaisa
May 4th, 2009, 10:59am
Rating: 5.2  / 10.0
I've attempted to read this several times. It seems like it could be interesting, but it jumps around too much and with the ancient background or whatever going on I have no idea if I just missed something or what. Maybe I'll try in a few months again, but for now it's making my head hurt.
Was this comment useful?  Yes

great manga! but tokyopop ruin it!
by strayed
February 5th, 2009, 4:28am
Rating: 10.0  / 10.0
hell~ this is a good manga before tokyopop ruin it...
what a horrible translation! this is crazy~ i don't even understand what are they thinking when they were translating this manga...
and they even changed the cover with their own horrible design...
Was this comment useful?  Yes

Proper Translation
by Waru
November 9th, 2008, 10:34pm
Rating: N/A
Just want to say everyone rating it seems to only have read the Tokyopop translation which is so off its not even funny they changed everything and turned it into a monstrosity. I suggest everyone read the proper translations that are out now.
Lastly don't get me wrong Shiozaki is obviously pandering with all the fan service still.

does the translation change?
by Risax
July 25th, 2008, 12:40am
Rating: 7.0  / 10.0
I have 3 volumes of Battle Vixens and orderd part 4 and 5 it may be because i'm not from America but half of the time i don't even know what i'm reading. i reread them like 4 times each and i still don't completly get.the art and fanservice are great though.But now my question in later volumes like 12 or 13 is the translation better?
Was this comment useful?  Yes

poor company is poor
by jrdragon2003
May 28th, 2008, 7:25am
Rating: N/A
after reading it, this story felt that what ever kind of plot was there before got lost in translation. for the most part since it's seems like slapped together poor slang from back in the 90's is being used for it, the story doesn't make much sense. even during points where it looks like some important information in the plot was supposed to pop up at some scenes it ends up being some weird jibber jabber. i'm in agreement with anyone who thinks this should be picked up by some group so we can atleast get a proper translation of it, cause TokyoPop just isn't cutting it with their own.
Was this comment useful?  Yes

Ooookaaay.....
by albeitalways
April 8th, 2008, 11:11pm
Rating: N/A
The manga seemed to be okay, but unfortunately, the plot and the fights don't seem really connected at all. Plus, the mangaka doesn't give out a solid point of the Romance of The Three Kingdoms plot in order to connect it to present day characters. And I just can't sympathize with the main character no matter what. Hakufu's just a blond ditz who gets her body parts ogled at after one second of fighting.
Another thing, Tokyopop's translation is freaking me out. Too much slang going on to even understand what the characters are really saying.
With a shaky plot and no moderation whatsoever of fanservice and pointless fights, I don't think Ikki Tousen is worth it.

Stupid
by Chas
March 1st, 2008, 4:06am
Rating: 2.0  / 10.0
As with all comics that feature girls fighting, this is just plain stupid. It seems the author has never been in a fight, or even seen one in his life. And tiny girls beating up big, brawny guys? It just boggles the mind.
Either way, all the characters are dumb stereotypes, the guys all look like they've watched too many rap videos, the main character is an annoying ditz, and the fights are some of the dumbest I've seen.
The only positive thing is that it's fairly well drawn, and there's a couple of good designs thrown in. If they author had had even a hint of taste or perception of reality, it might have been decent.
Was this comment useful?  Yes

Tokyopop's translation
by Wererat42
January 18th, 2008, 6:23pm
Rating: 6.0  / 10.0
I like the action and the fanservice as a break from all the other manga, but I really wish someone else would pick this up. The commercial translation is just... bad. The way they've made turned single word some kind of retarded slang makes it pretty much unreadable.
Was this comment useful?  Yes