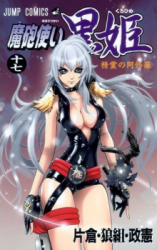 Hm
by MemeYakuza2019
January 12th, 2022, 11:32am
Rating: 6.0  / 10.0
Kurohime was an interesting shounen that had a good plot in the beginning, but around the late second to most of the third part of the story it became some-what weird and bland

MASTERPIECE
by LOW RETARDED Below
October 9th, 2021, 5:12pm
Rating: 10.0  / 10.0
Read this a long time ago, this manga is a masterpiece, The guy below is retarded and clearly didnt read the manga nor anyone giving this negative reviews.

pretty bad
by Joese
April 16th, 2021, 4:32am
Rating: 3.0  / 10.0
The some childish enemies/characters totally ruined it for me .I did like the backstory they gave to korohime it's like a mix of a weak minded Heracles and the tower of Babel.

But after the first ark only that(her story) is redimible, the plot and pacing are terrible. we never get a good enough explanation about anything and the ending was totally rushed.

Like they said...
by sagesmith
June 3rd, 2020, 8:44pm
Rating: 8.0  / 10.0
The other comments sum it up perfect - starts slow, then you really get into it, and then it's so good!! The fights are awesome, the artwork is BREATHTAKING, you know the characters and their personalities, it's unique, it's exciting, and then... and then... it all falls apart. It's hard to pinpoint where, but for me it was the beginning of the second arc. And then it just... man, it fell from the sky, crashed and burned HARD.

I still look at this series with love and respect, but damn. It's disappointing. This could have been one of my all time favorites but it just took a hard left and kept going straight into on-coming traffic. A shame.

I give it a high rating because the artwork is still one of my favorite and this series holds a special place in my heart still. At least the first 7 volumes do...

A True Gem Ruined...
by falconmaster3000
May 19th, 2020, 7:50pm
Rating: 9.0  / 10.0
This is one of the first mangas I ever read and one of the first ones I ever completed. The characters are touching and sympathetic. The story line is engaging. It really plays with your emotions.

I have not read it in a long, long time, so I am probably biased in leaving this review. I will admit, there were many problems that arose while the story progressed. I can't recall if the overwhelming sadness when finishing this stemmed from the series ending, how rushed the ending was, the flood of emotions of concluding such a momentus and long series, or the bittersweet and tragic but happy ending.

I agree wholeheartedly with the other average-low scores. From my memory of reading this as a young teenager, the time-travel section where they lose memories or something is very weird and can be confusing and off-putting. However despite the flaws, this really is a gem. The memory of reading this will probably stick with me for many years to come.
Was this comment useful?  Yes

Crumbles afer a good first arc
by PZcolo
April 9th, 2017, 2:40pm
Rating: 5.5  / 10.0
Have to agree with the several previous posts, I was having a good time reading this manga till the time travel part started, it went downhill from there and never managed to recover. We see it all too often in mangas, after a good start the mangaka does not know what to do with the story, tries to mesh all different kind of plot twists and popular elements only to find out he hadn't given enough thought to those elements.
Likewise we get an interesting duo in the first part, the annoying good guy and the selfish and disagreeable but cute Himeko it worked well and was even funny if annoying at times, unfortunately the combo is broken early on and Himeko/jou miraculously becomes Miss benevolence and there are no other interesting secondary chars (maybe Soudo later on).
All in all, readable, kind of a wasted opportunity and hard to recommend.

It gets better and then it doesn't
by KennEH!
March 27th, 2017, 11:30pm
Rating: 7.0  / 10.0
I'm really surprised how something that can hook you so well can lose you again. The beginning of this story is pretty typical battle shounen, even down to the slapstick. Stick with it enough and characters become likeable and a decent real story develops. With the addition of a time travel plot (which in my experiences rarely are done well) the plot starts to get a bit too clustered and falls apart. The ending felt abrupt; certain elements that I felt we're central were just hand waved away. Quite a few plot holes, and it's not just the the time travelling stuff.
The setting was super cool, but not very detailed. Magical wild west, small little Japanese like towns, and a bit of catsles with medieval space marines. All of this under a paragon of jerk gods. More fleshing out and it could have carried the manga itself.
The main heroine is an unbearable bratty joke character at the begining. She easily becomes a favourite later on. In order to finish the story she mostly just played as the lovestruck teenager. Zero (male protagonist) becomes a really neat character that seems pretty deep, maybe a bit too angsty for some people though. Not a fan of comedic relief characters, but was glad that they were sidelined a good bit when the story got more serious. A lot of characters didn't get enough screen time to really be appreciated, too much was happening and they took a backseat.
Art is not bad at all. Nice full page and two page panels that have a decent amount of detail. Not a huge fan of the long slender bodies, but it's done well enough too not hate it. Character designs are pretty neat too. Some of the gods looked really cool. Action scenes were paced very well.
I'd give this pass honestly, but I really can't say it was bad at all. It takes a while to get going and once you get a real good sense that the build up was worth it slowly goes back down again to just and alright finish.

Really Awesome
by Dalis
February 2nd, 2017, 12:44am
Rating: 10.0  / 10.0
You need to totally give it a try, you'll only wish you had later on when you come back. The romance is perfect, it goes well with the plot and story without being overwhelming and there is some great character development. It answers and and all questions, some idiot
said it was axed but it isnt. Give it a try, this is one of those keep you up all night readers full of action, drama and magic.
Was this comment useful?  Yes

No need to read it.
by satou123
October 3rd, 2013, 7:08am
Rating: 6.0  / 10.0
The first chapter is really interesting. I thought it'd be like, though the main protagonist can't do anything like magic, he'd overcome the trouble with his speed, and even stronger than the stronger witch. But, it didn't turn out like that, so I was getting bored for several chapters after that.
Hoping something will be happened in the relationship between main protagonist and the witch, I didn't stop reading it. And it turned out kinda good... at least before Rei's chapter. After that things turned out for the worst. It's really bad that I couldn't help but skip several pages each chapter. Wishing things will turned out better in the ending, yet wish was just a wish. Ending was as bored as ever with cliche thing that'll make you getting stomachache just from reading it. Not to mention main protagonist that'll always be saved by Hime, instead of protecting her.
Was this comment useful?  Yes