His highness the prince of Estolia Wilfred became an exchange student in Eito University. His noble appearance and gentleman’s manners quickly filled the campus with hysterical women’s voices. Miyako also studies at that university and for her master’s thesis, she is determined to interview the prince about his great-grandmother. But when she approaches him about it, she suddenly discovers “the dark side” of his character...?!

His highness the prince of Estolia Wilfred became an exchange student in Eito University. His noble appearance and gentleman’s manners quickly filled the campus with hysterical women’s voices. Miyako also studies at that university and for her master’s thesis, she is determined to interview the prince about his great-grandmother. But when she approaches him about it, she suddenly discovers “the dark side” of his character...?! 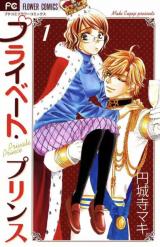 Note: You must be logged in to update information on this page.
Forum Posts Click to view the forum
Ressurection needed
over 13 years ago

The end dragged on for me..
by tipz
February 4th, 2015, 1:19pm
Rating: 7.0  / 10.0
For the most part is was a very enjoyable and fun read (it helps that the prince was drawn very niecely). During the end though I dealt like her feeling started to get pretty annoying and it seemed to drag on for me a little bit there.

(Spoiler has beginning to end)
Spoiler (mouse over to view)
a girl that's going to collage for history/science major is obsessed with wanting to write an thesis on the grandmother of a prince that has landed in Japan and is going to the same university as her... She finds a way to talk with him but he ends up being a big pervert for her boobs.. She pretty much shuts him down which sparks his thrive to get her even more.. During this time Ends up getting too much attention from the public eye and situations make her have to go home to her mothers.. Her mother owns a high class old shool (hotel) and wants her to take over.. Which is the main opposition for her.. Eventually the prince and her have sex and from there they slowly become a couple.. But she is always at odds and ends about being with him and his feelings for her.. In the end they get married and have a baby.
Was this comment useful?  Yes

i like the last part of chapter 10, really sweet.

Spoiler (mouse over to view)
and i'm thinking, ya he's a Christian and he's sleeping around with woman, well after he met Miyako then it's a different story, but still sleeping with her before marriage, good good gooooood Christian...
Was this comment useful?  Yes

it's part of every prince's job to give women something to dream about
by fufuchitzu
April 4th, 2013, 4:31am
Rating: N/A
Just judging from the title you kinda know how this will go.
Yes, this manga is very cliched and had it not been for the fact that the prince is a pervert it would've been boring, but All in all it works and made me laugh. It's well drawn and just enough chapters to make it very easy/fast to read. Even though it's smut you wouldn't really notice it.
No annoying character just funny and honest ones.

Amazing
by fantasize
July 27th, 2012, 2:16pm
Rating: 9.2  / 10.0
The art was fantastic and everything was well paced. A beautiful, beautiful cliched manga! One of the best. The smut scenes fit in very well, were not too intense/detailed, and was not overdone. I just wish the ending was a bit more satisfying, but overall, this is a good read.

Why we love it
by Rorii
June 6th, 2012, 7:59pm
Rating: 10.0  / 10.0
Obviously aiming for girls loving fairy tales, this manga is well made because it's not far from what reality could be. You might become attached to the characters who seem true and as for me I like hard-working main characters because they give me courage !

Five volumes is short but in the end the pace is just good enough (it's better to have something end early before it starts rotting...). To conclude, it's one of the best works from Enjouji Maki !
Was this comment useful?  Yes

So I read it
by enaikelt
November 17th, 2011, 9:30pm
Rating: 8.0  / 10.0
But I can't say it was amazing. I guess it was very fairy-tale like, which was a plus point, but like another reader, I did find the focus on Miyako's huge boobs awfully demeaning, though I'm sure it wasn't meant to be so. I finished it by the sole way of skipping about 12 chapters right to the end... and it made perfect sense... so I guess there wasn't actually all that much in the way of plot?

Pretty much, it's a fluffy fairy tale with a lot of dreamy-art sex. Nothing to really blow you out of the water... although I did get a little bit d'awwwww toward the final chapters.
Was this comment useful?  Yes

thats actually the thing about this manga it has a prince- lecher character without completly stepping on the clumsy, slightly weak and plain heroine that has a huge rack. i kindda love the Miyako for living for her dreams and even looking at Will as a destruction.. true they may do this and that not that i approve of it.. sorry im a prude
Spoiler (mouse over to view)
so she eventually got "pregnant" at the end.. which would have been terrifying if it were real not to mention my rating would drop like hell
anyways.. there are still some boring moments cause i have a feeling like i know what will happen next because its is like one of those mangas.. so yeah. but its still has those beautiful beautiful moements that make me smile

A Good Story
by Little_Sparrow937
March 12th, 2011, 6:34pm
Rating: N/A
Its your typical cliched romance, but its still really good. I definitely recommend it. The only thing that got on my nerves was the fact that in almost every chapter there was a sex scene. There's only so much smut I can take before it becomes tiresome.
Was this comment useful?  Yes

A manga close to my heart
by Roofstone
February 7th, 2011, 12:54pm
Rating: N/A
I do love this manga, it is a bit clichè'd, but clichès are clichès cause of one reason: It works.

And I do love the characters. Prince Will is a lovely figure.
Was this comment useful?  Yes

.....
by mangafan321
November 15th, 2010, 10:17am
Rating: N/A
i hate how the main girl acts like someone can "trick" her into doing something she is choosing to do
Spoiler (highlight to view)
she is attracted to will and sleeps with him after he lies about being home sick. and then she acts like she was "tricked" he may have lied but he never forced her into having sex. she was attracted to him and barely knew him and like an idiot slept with him. its her own fault. i dont like that the main guy lies sometimes. but i liked him more than the annoying female main character. dumb and easy are two words to describe the main character, she keeps falling for everyones story and makes an idiot of herself. the main guy was sexy and cool, though a bit selfish.