Login to add items to your list, keep track of your progress, and rate series!
Description
Nike, the fourth princess of the Rain Dukedom and one who holds the power to call forth the rain, travels to the Sun Kingdom to marry King Livius on behalf of her country after losing a game of rock, paper, scissors to her three older sisters. Upon arriving at the Sun Kingdom, she discovers that the Livius, who conquered the world in only three years after his ascendance to the throne, is only eleven years old! 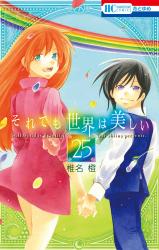 Note: You must be logged in to update information on this page.
Forum Posts Click to view the forum
Soredemo Sekai wa Utsukushii Gets Anime in April
over 9 years ago

Over forgiving female MC.
by Jandalman
March 7th, 2020, 3:03am
Rating: 1.0  / 10.0
Series was okay for a while, until this current arc where Nike was kidnapped and almost fucking raped and in the end she forgives the bastard. Even pleads with Livius to spare his life. What. A. Bitch. Then I suddenly remembered the last time she was kidnapped by another dude (happens quite often actually) and held against her will while Livius goes batshit crazy trying to save here and OH YEAH SHE FORGAVE THAT BASTARD TOO. Seriously I felt the years reading this series was a waste of my time.
Was this comment useful?  Yes

Welp. I don't hate it, but I don't really fangirling it like the other as well XD. Maybe since the romance is so fast that I can't really feel anything aside: "Well that's... Er... Maybe cute. But that's it."
Was this comment useful?  Yes

AMAZING
by KathleenCindy
May 30th, 2017, 3:48am
Rating: 10.0  / 10.0
This anime is so incredible and very overwhelming for me. It's touched of the bottom of my heart. This anime story is not just a love story or overcoming many challenges in life but also inspire us to my daily life. Its really touched my heart. Also this it made me realize how beautiful the world is and how important the music is. Its so very heartbreaking and lovable story. I will definitely support this until the very end.
Was this comment useful?  Yes

Livius x Nike = I LOVE THEM <3
by Maria-Ayako
January 29th, 2016, 8:19am
Rating: 10.0  / 10.0
i really love this manga. the art gets better.
not only dramatic, but very romantic, funny and sweet parts it has. the love between Livi and Nike is so warm and awww im going all doki-doki when i see them kissing!!~
i like the various kingdoms, i find the rain summoning interesting, and Livi being the king of the world while being a kid is so awesome. i wish they would make another season of the anime, coz there was Nike actually singing while in manga its not written what she sings x)
anyway its a great manga. i liked that Luna got a man too tho xD well i do like him too xD
Since i wrote this comment much happened, Livi is changing to the better, both Nikes and Livis love is growing, its still interesting and i cant wait for the next update which will be chapter 75!! I hope they would make a second anime season. Coz i love this so much!!

This adorable little king <3
by wallyakazukin
September 8th, 2015, 4:34pm
Rating: 10.0  / 10.0
I started this manga feeling "oww, it's cute and fluffy!"
Then as the story goes, I notice the plot is not only about cute and fluffy things, or those craps that usually show up in shoujo manga.
I appreciate the way author telling her reader about "king jobs", regional problems that happen within some unique kingdom in this manga's world (sea kindom, sand kingdom, rain kingdom, and I hope to see more

), diplomatic issue (though not something super heavy), and those makes this manga meaningful.
This couple make me feel like I saw another karluk-amira (otoyomegatari), in different world with different setting and comedy, which is kinda refreshing! Their character is lovable! Nike has strong personality, yet she's not stubborn annoying and she can think what's best to do. Livi... aaagh, he's cute and handsome and cool at the same time. I really like this type character >v<.
I have no problem with art, actually. It's getting better, too.
Was this comment useful?  Yes

Not really for me
by YukiSaito
October 20th, 2014, 10:42pm
Rating: 6.0  / 10.0
The manga overall was good-older female lead, willing to go against the odds to prove herself, stuff like that. Male lead, younger and shorter, arrogant, but amusing. An interesting twist to other shoujo mangas; it's kinda refreshing in a way. The art is also good, and the storyline is fine.

But I stopped around the 2nd book-it was like...the same thing happening over and over again. Female lead not allowed to be with male, proves herself, attempt is foiled, they solve everything perfectly OK. In the first few chapters, Nike said she called on rain but it was a sacred ceremony. But when the chapters went on, she seemed to call on rain for my trivial reasons.

The romance is there, cute, but somehow, slightly unbearable. At first the height irked me, but I got used to it. The humour was also there, slightly twisted, but good. Overall, it was average, if not tipping slightly towards the below average side. Though there are some really sweet parts-especially when Nike is trying to teach Livius about the world and stuff like that, and how Livius was treating her so sweetly in the background. But not really my cup of tea.

If you like shoujo with a twist, this is for you. But not for me.
Was this comment useful?  Yes

Good
by Ginny
August 13th, 2014, 11:39pm
Rating: N/A
I like it. It's not my favorite shoujo( which is Skip Beat! & Red River), but it's awesome compared to most shoujo. These commentators are so cynical. The story does not need heavy drama and angst to make it good. Those are the necessities of a good yaoi like Viewfinder or Totally Captivated, Let me stop the fujoshi in me is getting out.
Was this comment useful?  Yes

The main character is actually relatable, and most of the characters' actions make sense, but the author could've made this manga even better by going deeper into detail. The struggle of being a foreign queen paired up with a child king has been lightened by a lot, but the story is still enjoyable.

Niki, the queen-to-be, has a serene mind that tries to see beauty in all things (I've been trying to do this as well, and y'know what? The rain IS really pretty). She is also way more down to earth, due to her origin as more of a "tribal princess," this helps to show all the energy she has and stuff. Inevitably, her positive aura becomes a huge part of the king Livi's life--to the point that he becomes semi-insane if her life is threatened.

(I kind of understand that feeling. I mean, the poor dude has been in darkness for so long that he never wants to let go of his light again.) And despite being a child, he has the wisdom of a king, albeit he also has the cruelty of a conqueror. (niki is changing that side of him though, and I love that)

Either way, this one isn't all THAT cliche. Something about the two characters make me root for them...like a lot. I like both of them--thank goodness.

OH ALSO, if anyone is looking to propose to someone for marriage, this manga has some romantic quotes that just leaves people shivering.

One of the meaningful quotes (NOT related to marriage):

Niki is commenting on how the young king doesn't enjoy the beauty the world offers:
"Your majesty, even though you have conquered the world, none of it is reflected in your eyes."


So enjoy life guys! Go look at flowers! Go sleep under the sun~! Sing in the rain!

Too much fluff for me. Female lead is only capable of saying sweet things
by SilverStorm
January 18th, 2014, 9:45pm
Rating: 6.0  / 10.0
Needs more haughtiness from the female lead. She's pretty much a princess in title with none of the mannerisms, experience, or competence, much to my disappointment.

She's more like the poor girl character paired up with the king. (Well, actually, her family's poor, despite being royalty.) She's optimistic and tries to show how pretty and beautiful and awesomely sparkly the world is. Better yet, when people talk crap about her, she has no retorts on hand. Of course, insult her man, and she immediately agrees to any stupid bet or challenge because she just HAS TO prove her worthiness to others. *sigh* For god's sake, you control the freaken' rain! You don't need to prove nuthin'.

Anyways, it does have its sweet moments. The male lead being younger and not having a complex about it is mildly refreshing. He also says some sweet things. They show hints of his dark side, but they're barely there. The girl is a pretty stereotypical shoujo lead, not annoying, but not particularly interesting. Even the villains are pretty boring. I dropped at the end of volume 2.