Login to add items to your list, keep track of your progress, and rate series!
Description
A boy and a girl are forced to join hands for all eternity!?
In a land ravaged by an epidemic known as "Troy", the only people with healing arts capable of stopping the seizures caused by the disease are the Sisters. Although they have a high resistance to the disease, they are searching for a person who is truly immune, so that they can find a cure. The main character is Sister Elraine, one of the Sisters who becomes infected with Troy. But, when she touches Kiri, a seemingly ordinary boy, her seizures stop. Could he be the one!?

In volume 1 is included the oneshot Island:

A story that takes ... More...
A boy and a girl are forced to join hands for all eternity!?
In a land ravaged by an epidemic known as "Troy", the only people with healing arts capable of stopping the seizures caused by the disease are the Sisters. Although they have a high resistance to the disease, they are searching for a person who is truly immune, so that they can find a cure. The main character is Sister Elraine, one of the Sisters who becomes infected with Troy. But, when she touches Kiri, a seemingly ordinary boy, her seizures stop. Could he be the one!?

In volume 1 is included the oneshot Island:

A story that takes place on the day Aira turned 14, and learned the devastating truth about the island she lives on, which is completely surrounded by a huge wall... Less... 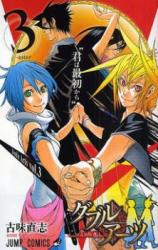 Very nice manga, sad that the ending was rushed
by AndelMartina
December 28th, 2020, 12:21pm
Rating: 10.0  / 10.0
I didn't expect much from this manga but ended up being pleasantly surprised by the nice story, characters and art. My only complaint would be the abrupt ending. It feels like the mangaka had to cut the story short or that she ran out of ideas and needed some kind of ending, I don't know. Otherwise I wholeheartedly recommend reading it 🙂
Was this comment useful?  Yes

Truly disappointing that it was axed.
by Shellshock
November 12th, 2020, 8:01am
Rating: 6.0  / 10.0
The series is about a girl who goes around healing people with a disease that makes them transparent till they disappear. However what they are basically doing is converting their disease and giving it to themselves. The reason they can do that is that they have a naturally strong immunity to it. However doing it after a considerable amount of time does take its toll eventually. This disease can also spread to anybody that touches you skin to skin. So touching via clothes has no effect. So when a random boy (MMC) touches the FMC and is not only not affected but also halts the virus she had to take him back to headquarters. Of course one problem. He has to be constantly touching her otherwise the disease will immediately spread, killing her.

Im actually legitimately impressed by this manga originally. The manga starts great. Creating this setup and putting our main characters in a hilarious situation. It bring some legitimate funny moments to the point i was actually taken aback by this manga. The main cast as well was fantastic, the villains also brought a sense of danger and excitement to the stage. The series was cliche but not in a bad way. The author knew what he was making and executed them, to my surprise, really well. It wasn't like a masterpiece or anything but it was really enjoyable to read.

One of the characters especially was badass. The first big villain that shows up as well as the first mentor that shows up. Both of these characters carry such an enormous presence it was amazing.

Sadly though this manga was axed and with no closure whatsoever. The series basically ends with the adventure starts NOW. but it doesn;t.

TLDR: Quite sad. Good start wanted to see more but axe stopped any chance of that happening. Sadly i have to rate manga based on entire series and despite the axe, since this is such a short read i think it'll be a comfortable time killer if nothing else. 6/10
Was this comment useful?  Yes

Lost potential
by PZcolo
April 11th, 2017, 8:42am
Rating: 7.0  / 10.0
A decent story (so far at least), an interesting setting, some decent and some good characters, nice art and good flow of the fights.
This Manga had all of that yet got cancelled, we get 20+ volumes of crappy generic shonnen crap instead from our precious Japanese publishers, such pity.
I'd love to see more of this manga, thou I know I wont, the mangaka turned to love-comes and was pretty successful with nisekoi so I don't see him coming back this way.
Was this comment useful?  Yes

Disappointed
by hurafloyd
May 13th, 2016, 3:19pm
Rating: 10.0  / 10.0
The concept had so much potential and it was cut like that. The story was going in a good way into a proper development, didn't feel stale at any time and when the characters started to improve themselves (in many ways)... AXE. It makes me sad to add another story with great potential to the "will never come to a proper end list".

Definitely the ones who brought down such potential should have their fingers cut and eyes gouged out. Worse crap is out there and they stay popular but, at the end I cant bring myself to blame the publishers, if their clients want crap, they have to provide crap and the best example is... that the author that made this manga is the author of Nisekoi.

Great title
by philip72
March 27th, 2013, 8:31pm
Rating: 10.0  / 10.0
It's absolutely criminal that Jump cut this one short. The editorial board should've been flogged through the streets for their gross stupidity.
But Jump has always been stupid in that regard, it comes from paying far too much attention to postcard polling. Jump has awesome new manga scouting skills, but atrocious management of the same.
Was this comment useful?  Yes

kidsoshi was entirely correct
by SAimNE
December 22nd, 2011, 4:02pm
Rating: 10.0  / 10.0
While not exactly fulfilling the ending seemed to answer the big questions, and it was a really good story to read while it laster... this and another story I read about aa dude being forced to dress as a chick and go to a demon school make me think publishers/editors have horrible taste... I've seen absolute crap series drag out for 30 volumes, meanwhile gems like this are cancelled..... it was a great loss but no reason to downgrade the rating, 10/10.
Was this comment useful?  Yes

So Much Potential
by TRMshadow
August 2nd, 2011, 8:21am
Rating: 9.4  / 10.0
was shown within the first chapters, but the idiots at Shueisha (or the readers in Japan) were too stupid to recognize how great this could've become. Read it even with the axed ending, read it even though it's only 23 chapters long. Komi-sensei is an amazing mangaka that has so much talent yet unnoticed. It was a sad day when Double arts was cut from SJ.
Was this comment useful?  Yes

pretty good!
by azngenius95
June 28th, 2011, 5:32pm
Rating: N/A
this story had soooo much potential and it was a shame that they dropped it so early.
even though it was dropped, the author was able to connect the dots fairly well and i found the ending enjoyable but a bit lacking still
the plotline is very shounen but there is some subtle romantic twinges that made me smile
the characters were well developed and the artwork fit my tastes very well

anyway, i recommend it highly! please enjoy
Was this comment useful?  Yes

It had potential...
by AmberSZ
April 7th, 2011, 11:00pm
Rating: 10.0  / 10.0
This never really had a chance to go anywhere... It has the typical mystery group, and unexplainable phenomena. It's unfortunate the manga had to end so abruptly, but I'm glad the mangaka left it open-ended instead of trying to force a quick ending.
I'd recommend this, unless you can't take never knowing what happened.
Was this comment useful?  Yes

a shame it got ended
by zeando
February 4th, 2011, 1:59pm
Rating: 10.0  / 10.0
knowing the reasons the last chapter (or the last 2) has to be ignored, the story ends where it got truncated
the chapters we actually have are only an introduction to the main story, at least even with it getting truncated, it got truncated a little after the end of the main introduction

the story was really entertaining, any chapter was no useless, and even if it lasted only 21 chapters (i ignore the last screwed ones) it feels like it was a lot more long
the comedy was also great :3 the way the 2-protagonists react to each others and with other characters was so funny :3

even if this will not restart (which sadly is likely) it will remain for me a great manga, a great story

note: the only odd thing i noticed, is that the main villan and supporter (zere and fallan) look like ripped of org13 of kingdom hearth(only the design, nothing like the personality)... this may be one of the reasons jap folks didn't appreciated this much? :/
Was this comment useful?  Yes