Login to add items to your list, keep track of your progress, and rate series!
Description
From Global Bookwalker

Detective Randy "Ryo" Maclean has just arrived at the NYPD 27th precinct. It's not long before is he out on a narcotics case with his new buddy Dee Latener, the brash and self-confident troublemaker, who might be eager for more than just a business partnership with Ryo. Follow the NY cop duo Dee and Ryo in action against crimes, and for a possible romance-to-be...!? 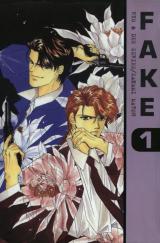 Note: You must be logged in to update information on this page.
Forum Posts Click to view the forum
Help me find this FAKE fanfic!
over 10 years ago
Great manga!
over 14 years ago

classic. bi seme x straight uke.
by takame
September 2nd, 2017, 12:47pm
Rating: N/A
uke took his loook time to figure out his feelings. good pace. it took... what? 2-4 years for the charming and handsome dee to get the straight uke around? hehe.
This manga is ahead of it's time. Or is it the other way around? they don't make mangas like this anymore. Now, it's all about the smut and the sexy police trope. For new readers, the art style will take getting used to but once you delve in the story, you will understand why this is a classic. Instead of a trope-y and/or kinky police plot or just dropping a gay+police together for some sexy time, we have a manga with a well-developed and properly researched (though not super accurate but the very japanese mangaka tried) story about two policemen who ended up together and just happened to be men. I like how the story is pieced like that. In every arc, we get to see their lives and how the kids grow and as case after case were properly closed, we get to see how their feelings grew. Dee, the guy who has chased his partner for years is as pitiful as he is amusing. I like how he's always creative in his rants. He kept the whole manga into a lighthearted note and I appreciate that despite the dangers and deaths surrounding them, Fake still maintained it's comedic note all throughout. That's the biggest difference it had to the heavy drama New York, New york.
Ryo #adopted 10-yo bikky at the start of the story.
@vol 3, chap 10: appearance of rai/lai and lass. later had their own book.
#great female character: she served as a cast for one of a few arcs too bad but she's cool, pretty and strong. i like her.

Fake must be one of the first manga titles I've ever read because I remember reading the translation to my language along with the scans. I also remember that it fascinated me, thrilled me and took me along for an emotional ride along with the characters.
Now, that is quite common thing when one is young (and believe me, I become embarrassed when I remember some of the titles I used to like), but Fake stayed with me for years and the books belong to my prized collection that I'm never going to give up.

Some people say that the art takes some getting used to, but I actually love it (Matoh-sensei's new art style on the other hand...). It is sharp and masculine without being straight up bara and you can forgive the occasional flowery background. Now I like my cutesy, flowery, long-haired beauties, but tiny cute cops with huge eyes make me laugh (I'm looking at you, Tokyo Yabanjin).

Which brings me to the setting. Cops are usual... non-fictional foreign countries less so and the combination of the two is not something seen daily. And when it is done (mostly) right and you actually believe that Dee and Ryo are chasing the bad guys (or running from the bad guys, more likely) through the streets of NYC not Tokyo in disguise, it is very refreshing. But hey, I'm not from around there so who knows.

The story is well paced with an interesting plot and there is plenty of comedy and action all along. The characters are all likeable (yes, even Berkerley Rose) and pretty soon you find yourself rooting for them... or wanting to beat them up when they do something stupid xD The slowly developing relationship between Dee and Ryo is wonderful, sweet and realistic. Actually the dynamics between all the characters are well done and it's nice that 99 percent of the characters aren't gay.

Tl;dr: If you haven't read Fake yet, do it. You might even like it, I know I do xD (and pls forgive me the lame pun in the subject lol)
Was this comment useful?  Yes

Perfect pace!
by OtakuMadness
August 11th, 2012, 5:51pm
Rating: 10.0  / 10.0
I meant to review this as soon as I finished reading it, but here I am now! I just have to praise this!
I've learned the lesson never judge a manga but it's art-style! a long time ago, and I'm so happy for that or I might not have read this! (the shame!) In the end I have fallen completely in love with the style and completely in love with each character!
First off, the mix of drama and refreshing humour, as well as the well paced action and plot made this an absolutely enjoyable read for me!!! I loved it! Every cliche! Every story! Every couple!
The thing that most won me over was the chemistry between the main couple, Ryo and Dee!
Poor Dee having to be denied for so long! xD and Ryo, a refreshing uke! Not feminized to hell! Dx
I was completely caught up in their development as a couple over the period of each volume! They will always be one of my favourite couples! But let's not forget that this manga is full of great characters! Characters I wanted to see more of! I absolutely can't forget Carol and Bikky!

and I wanted to see our idiot J.J find a requited love! XD
In the end I can't think of anything I didn't love about this! This is going on my classics and personal favourites shelf next to Kizuna! :3

Love It!!!
by castleofbones
April 18th, 2012, 1:46pm
Rating: 10.0  / 10.0
This manga is my all-time favourite and was one of the first yaoi/ shounen-ai manga I read. But let me tell you - I still haven't found a better series than this! I have read a lot a yaoi and shounen-ai manga's (I read them everyday) but none of them have quite mixed humour with drama so well (well except Yami No Matsuei) and have had a nice, realistically paced romance. When I first picked this up I wasn't sure about the art (in fact I hated it!) but now I think it's beautiful (or maybe I am just blind with love

). Anyway I have now brought all 7 volumes and intend to keep re-reading them for my entire life (OK maybe that's an exaggeration but at the moment I can't bare the thought of parting with them). urrr... sorry i rambled on...
There's just so much that I love about this series- it would be a shame not to read it even if you don't like the art

I don't get the title...
by Pebble_
October 31st, 2011, 3:23pm
Rating: N/A
But, that little matter aside... It was a good read. It's on my list of Yaoi and shounen-ai that I might want to re-read any time.
I have a soft spot for police-axed storylines, with all the bad guys and possible vendettas that they imply. As for the love story, it's kinda slow, but in a good way, and quite refreshing.
AND, I couldn't not mention that Fake belongs to the honored list of the few good Yaoi (shounen-ai?) with non-gay secondary pairings. I LOVE such Yaoi, I can't think of anything more annoying than Yaoi where all chicks are evil, and, miraculously, the rate of male homosexuality in the office (or school or neighbourhood, or whatevs) where the story takes place borderss 98%. Yeah, right! Real realistic, and immersing.
So, yeah, real good story. I'd like to tumble on such stories more often.

Favorite Manga EVER.
by j3girl
June 9th, 2011, 5:09pm
Rating: 10.0  / 10.0
This was the first yaoi I ever read. And it is now my favorite manga of all time. This manga is AWESOME in every way! I LOVE Fake! I can't even express my love for this manga it's so great! I love the characters! Ryo, Dee, Bikky, Carol, the guys at the department, the side characters, all of them are fun and VERY memorable. This is probably the best yaoi you will ever read! The romance isn't rushed whatsoever and the action and comedy are never ending. Also the mood and feeling of the whole series is just amazing and never overbearing! The artwork takes getting used to because it's a 90s manga but you come around to LOVE it! Comedy on every page, well thought out plot and action, slow but awesome romance, I don't know any other yaoi or shounen ai that can compare to FAKE. I know I'm rambling a little bit but I must say, I really do think FAKE is the king of BL manga. For sure! If you haven't read the manga yet, please (I beg you) most definately stop reading this comment right now and go read it already!!!
One question though for any readers of FAKE: Why was this manga named fake?

Decent
by chibit_tan013
May 25th, 2011, 2:31pm
Rating: N/A
To be blunt: the art is messy and awkward looking, the story drags a bit in the beginning, and if you live in America you'll be annoyed by the lack of realism. However, if you can get pass the first couple of chapters and inconsistencies, the story isn't half bad. The sad thing is now the plot would be considered cliche, even though it was unique when it was written.
Was this comment useful?  Yes

Love!
by Camui Alexa
January 10th, 2010, 9:14pm
Rating: 10.0  / 10.0
I must start by saying that the most amazing thing about FAKE is that this is not the average yaoi/shounen ai manga. It was very well a homicide-department-detectives manga, where the leading charas just happened to fall in love and be both male.
Honestly, I found the charas' depth and background stories stunning; and Ryo's conflicts are not so much the typical "oh, powers, I'm falling for a guy!", but more like "Oh, powers, I'm falling for someone". I believe that we all experience that fear to open up to someone and give ourselves a chance at love.

One of my favorite mangas, and I have to say, I've read quite a few!
Was this comment useful?  Yes

fantastic :D
by gwisoon
November 29th, 2009, 9:28am
Rating: 10.0  / 10.0
Plot, art, characters etc are stellar. For me the best part of this manga is the characters; Ryo and Dee are just ridiculously likeable :3 In other words, go read it or you'll be missing out big time!
Was this comment useful?  Yes

Awsome
by Sakura_Hikizaki
September 4th, 2009, 10:19pm
Rating: 9.0  / 10.0
One of my fave manga of all times!! I enjoyed ever page of it. I loved it so much that I re-read it 3 times. Not the most beautiful artwork, but you learn to love it. It was a killer waiting for the sex scene between Ryo and Dee. I also enjoyed the side stories too
Was this comment useful?  Yes