Login to add items to your list, keep track of your progress, and rate series!
Description
In a high-tech world, Boris finds out that his cute classmate Yuri Angel has created a robot that looks JUST like him! Annoyed by the robot's resemblance, and by its creator's lack of emotion, Boris hides the automaton in his room and sneaks into the Angel residence… pretending to be the robot itself. But once he succeeds at the bizarre ploy, how does he get out of it? 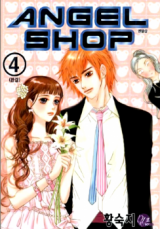 Note: You must be logged in to update information on this page.
Forum Posts Click to view the forum
did CPM Press dropped angel shop?
over 14 years ago

love the art!
by ddeceive
August 21st, 2012, 2:32pm
Rating: 10.0  / 10.0
I also love the story because the romance was slowly progressing. He didn't just fall in love with her because she was pretty. That n other elements made me really like this story. I think the characters are also gorgeous.
Was this comment useful?  Yes

Great Plot!
by mashimaro12345
January 4th, 2012, 12:56am
Rating: 7.5  / 10.0
The plot is always unpredictable, which makes this manhwa exciting at all times! It's been quite some time too since I've laughed so hard while reading a manhwa. Those crazy facial expressions created by Hwang Sook Ji are just hilarious! The artwork is just average, but it improved in volume 4. The author should also do more work on Yuri's biological father, and not just making him disappear throughout the whole manhwa. And it's sad to see Raem like that in the end, although Yuri has Boris to take care of her. Oh well.
Was this comment useful?  Yes

Spoiler (mouse over to view)
after reading too much manhwa i've realized that when the author hits a slump they just introduce an over-dramatized mafia or secret organization arc/element. so as soon as misha appeared, i sighed, gave it one more chapter, then decided this author must be another hwang mi-ri worshipper...

i swear, the only decent work that comes from korea is on naver.

Not just unpredictable; this is... insane.
by Hanjae
November 28th, 2011, 12:43am
Rating: 7.0  / 10.0
Wow. I'm not sure what to say after reading these four volumes of absolute insanity. This is something you'll either love or hate, I think - you might enjoy the ride if you're in the right mood for it, but if you're after something that's well-plotted with consistent character development, then you'll probably develop a stress tumour from reading this. Whether you like this or not, I can say one thing for it; it definitely is not predictable, despite what previous commenters may say.

The description up there only covers the events of the first volume; from there onwards, it seems like the manhwaga simply threw in the weirdest, most illogical ideas she could think of. Normally, one would probably expect Boris to slowly defrost the Ice Queen, Yuri, but here? We get robot-selling battles, long-lost parents, crazy rivals and mafia plots rooted in random birth secrets. Don't understand? Never worry, neither did I. It made for some darn wacky entertainment, but the crucial point here is to keep your brain switched off.

The main character, Boris, is amusing, and so is the way Yuri has him wrapped around her little finger. Boy, it's a refreshing change to see a guy be the one completely devoted to the girl! He's the one who mainly experiences insecurity about their relationship, the one who mopes when he doesn't get to see her, etc. None of this is done in a very serious manner, of course. There's really no character development to speak of, though, unless you count Yuri thawing by a miniscule percentage, and their relationship doesn't make progress so much as it jumps forward.

As for the art, I can't say it's terrible, but it's far from great. I'm not a fan of manhwa art in general, but the art here didn't bother me until about the second volume onwards, when it became messy, blurry and downright off sometimes. I'm not sure whether this is to do with the original or whether the scanlators had to work with really bad quality raws (sometimes it looks like the editor abused the blur tool), but either way it isn't pleasant. At least Boris and Yuri more or less consistently look good? I suppose you can say that the art can be as insane as the story itself.
Was this comment useful?  Yes

incomplete story?
by rain_tears0123
May 25th, 2010, 6:51am
Rating: N/A
I feel that there's something incompleted. There would be something about Yuri's father and his feeling, his own story why he was so cold but how much he left that girl... what was happen to Yuri's father... Somehow, for me, this story is incomplete >"< Just like the author missed something!
Was this comment useful?  Yes

Overtly Shoujo
by Trussardi
May 20th, 2010, 8:59pm
Rating: 7.0  / 10.0
Ignoring the art, this one is fairly ordinary. Boy meets girl, girl likes boy and makes a robot that looks just like him. Shoujo comedy hijinks then occurs. Unfortunately the plot is very predictable.
Was this comment useful?  Yes

one of my favorite manhwas
by Spearsmen620
March 16th, 2010, 9:05pm
Rating: 10.0  / 10.0
I was realy absorbed into the manhwa in the beginning volume and it was pretty funny. today, march 16th 2010, i finished the rest of the manhwa after seeing the release in evil flowers's page. I loved the ending. The last chapter was so hilarious and so touching at the same time. truly on of my fave manhwas

cute
by elalendi
November 19th, 2009, 7:07pm
Rating: 10.0  / 10.0
I really liked the first volume. No drama or tears or love triangles, instead an interesting plot with a funny main character.. actually all the characters are funny and likable. Light and cute (there were parts that made me go "aww!") Have to see how the story develops but so far it looks good.

Edit: I've finished this series now and it's become one of my favorites! The ending was very fitting and cute and wonderful.