Login to add items to your list, keep track of your progress, and rate series!
Description
Nako is a poverty-stricken 21 year-old in desperate need of a job. She applies for a job at a jewelry store. When shop owner Ren identifies herself as a lesbian, the competition for the position evaporates, leaving only Nako. Ren asks her if her sexual orientation will be a problem, Nako sensibly replies that she's not interested, so she doesn't see any problem. 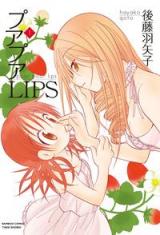 Note: You must be logged in to update information on this page.
Forum Posts Click to view the forum
I don't get it
over 11 years ago

I love this series
by plotrobert
April 22nd, 2016, 1:19pm
Rating: 9.8  / 10.0
I think this is probably my favorite romance manga. It's certainly the one I've re-read the most, and it's got my favorite couple. Plus I not only find it genuinely funny but also touching, heartwarming and even sad at times. What I love about this story is that it's very well balanced and plotted out. It really does feel like someone ACTUALLY sat down before they started the comic and planned out how the plot would go. This sounds like a very minor thing but I can't tell you how many mangas either feel horribly over bloated (with 200+ chapters where not much happens) or terribly rushed. This story does what a good story SHOULD do, tells a complete story with a satisfying ending. The only reason I wish there was more chapters is because I feel like I could read about these characters forever.

I'll straight up admit there's some flaws. For one, the "worst" part of the story is in the beginning, just because I think it takes a bit to establish the setting. Heck the first time I read this series I actually dropped it around chapter 20 and only picked it up again on a whim. Then there's also the fact that the author kinda runs some jokes into the ground a bit (like Nako's poverty). But both of these problems are really just nit-picks. If you haven't read this series yet, at least stick with the series up until Nako and Ren go on a business trip together. That's when the series really starts to pick up

All and all, highly recommended. I wish there was more like it.
Was this comment useful?  Yes

Keep going!
by idetektiv
October 13th, 2014, 5:04pm
Rating: 8.0  / 10.0
I tried reading Poor Poor Lips for the first time a few months ago, and gave up on it about 20 chapters in. It was cute, but I didn't see how such a story could continue catching my interest for another 50 or so chapters. Going back and having read all of it now, I see that I was very wrong.

The story starts getting a bigger plot, and more characters are introduced, and it still kept my attention fully this time around. I was especially pleased to see
Spoiler (mouse over to view)
a transgender character being handled so well. Even when his biological gender was discovered, the other characters still referred to him as a male, and we even get an update on him at the end. He even wore a binder instead of the typical bandage binding you often see FtM transmen depicted with, which is a good example for any young transmen who might read this.

Stick with it and you will find yourself happy and more satisfied than most shoujo ai manga have you end up.
Was this comment useful?  Yes

the best loli shoujo ai
by whitespade
August 28th, 2013, 1:24pm
Rating: 9.5  / 10.0
it is so freaking funny, every page had me laughing. i really love the characters, they are cute and interact well. the development of their love is logical too, and i love that they grow to love each other through thick and thin. i'm more of a yaoi girl, but this manga is simply great.
Was this comment useful?  Yes

Its GooD
by Findy
June 13th, 2013, 5:06am
Rating: N/A
surprisingly the content of this manga is very enjoyable
this manga main focus is about the decision to go with your sex preference BUT the best thing is its full of LoL moment from chapter 1 to the last
Was this comment useful?  Yes

Great Characters
by monkeyvoodoo
June 10th, 2011, 1:33am
Rating: 10.0  / 10.0
I can't get enough of this series. It's quite adorable, and the characters and situations have this tendency to really pull at my heartstrings. This is one of only a few series that I really eagerly await each new release of.
Was this comment useful?  Yes

Really hope Ren and Nako get together

One of the few manga's I'm actually looking forward to the next chapter scanlation.
Was this comment useful?  Yes