Shurei Hong, destitute but of noble birth, has always dreamed of working as a civil servant in the imperial court of Saiunkoku, but women are barred from holding office. The emperor Ryuki, however, refuses to take command, leaving everything to his advisors. Shurei is asked to become a consort to the emperor to persuade the ne’er-do-well ruler to govern.

Shurei enters the palace as Ryuki’s consort, but he has yet to seek her out. It is rumored that men, not women, share the emperor’s bedchamber. Shurei must think of a way to stop the emperor from shirking his responsibilities,... More...
From Viz:

Shurei Hong, destitute but of noble birth, has always dreamed of working as a civil servant in the imperial court of Saiunkoku, but women are barred from holding office. The emperor Ryuki, however, refuses to take command, leaving everything to his advisors. Shurei is asked to become a consort to the emperor to persuade the ne’er-do-well ruler to govern.

Shurei enters the palace as Ryuki’s consort, but he has yet to seek her out. It is rumored that men, not women, share the emperor’s bedchamber. Shurei must think of a way to stop the emperor from shirking his responsibilities, but she has to find him first! 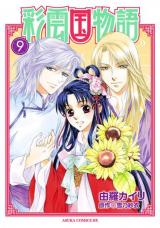 Note: You must be logged in to update information on this page.
Forum Posts Click to view the forum
Complete for real?
over 8 years ago

Spoiler (mouse over to view)
Shuurei did end up with emperor. But only in the novel. Since the manga ended abruptly in Shuurei passing barely for government position exam. While the anime in s2...I can't recall but it's still incomplete too.

I'll honestly collect all of the volumes a.k.a. purchase them officially (online), IF it will cover the rest of the novel until the "real ending" or even at least a "better alternate ending."

meh
by Azure_1802
July 24th, 2014, 8:51am
Rating: 7.0  / 10.0
i think it has good art and the plot's interesting at its start, but i don't like the reverse harem (i think it's irrelevant) and somehow there're too many supporting characters that i can't remember all of the names.
to sum up, i like the way the author build the background and the mangaka's art work, but i don't like the plot
Was this comment useful?  Yes

nice
by jungyunho
March 13th, 2012, 12:53pm
Rating: N/A
can't get enough of this manga and anime. love how some of the characters have 'hidden' personalities. and I agree, the character and plot twist build ups are awesome!

i really hope they make a season 3 for the anime and make the other light novels part of the manga
Was this comment useful?  Yes

thats the ending of the second season of anime, not the entire anime
the anime is currently in indefinite hitus
Was this comment useful?  Yes

My opinion
by Krysic
December 26th, 2010, 6:02pm
Rating: N/A
I've watched the anime, and the ending of THAT series dissapointed me.
Spoiler (highlight to view)
You'd think that Shuurei would accept his feelings and they'd end up together, but it just drags you on. There was more romance between her and that bad guy, but she like doesn't show much love to the emperor. >: ( poor guy.
I am a lil hesitant on reading the manga, cause i was pissed off about the ending of the anime. I know they are usually different, but still.
Was this comment useful?  Yes

SO CUTE
by cecixiao78
August 18th, 2010, 4:29pm
Rating: N/A
awww the characters are all so cute. they all have their own presonalities that make them special and unique. especially the majesty. hes adorable so cute. I havent seen the anime but i think the manga is not as bad as the people say it is. I also think its best to read the manga then watch the anime always best to do that.
Was this comment useful?  Yes

Loved the Anime
by Fareki
June 20th, 2010, 3:23pm
Rating: 9.0  / 10.0
It was one of the best things I've ever watched/read, and I'm not saying this lightly. Sigh....there are so many good things about the story, especially all the political intrigue and ongoings, which I love. All the characters are likable, and each have their own distinct personality. There aren't many extremes personality wise. My current favorite characters are Shi Seiran, Yougetsu (love this guy), Ensei, and Ran Shuuei along with Kou Shouka and (minor character) Kijin Kou, the treasury person. I would have liked to call Shuurei one of my favorites as she is the main character, but I felt that she was too naive. Her personality was real enough, but I guess I just like the extremes anyways. ^.^'

Personally I like Seiran better than Ryuuki. Ryuuki is just too childish. Sure he might play on some maternal (and I'm assuming that most of the people who read this are female) feelings, but it gets irritating sometimes. Seiran is much more mature and (most of the time) reserved.

This is most interesting josei I've read/watched so far. Interconnecting plots, intriguing backstories, along with an fascinating universe make it a definite read/watch. But those that are just hung up on action stories wouldn't like this genre. Don't read it if you don't like politics (and I use that term loosely).

Brilliant
by Serafimangel
May 5th, 2010, 2:58am
Rating: N/A
I agree, it rocks, shame that the manga is so far behind the anime, but it actually is much truer to the novel than the anime is. The novel is still ongoing and is past the anime now (by a couple of volumes). I like the art, the backgrounds are so detailed.
Was this comment useful?  Yes

I can relate
by janicedmanuzon
March 15th, 2010, 3:08am
Rating: 10.0  / 10.0
I'm very happy that a lot of people really like Saiunkoku Monogatari. It's such an interesting story and it's not like the others.It's really a josei, Fave_chan? I thought that it was also shoujo. So sad. Until now, it still isn't updated. I hope that they will continue the anime. Well, my favorite character would be Seiran, because he's so passionate, don't you think so? Especially at the time when he slammed his fists after getting really pissed off with Sa Sakujun. Anyways, you're all really cool!

Yeah
by thebikernun
January 26th, 2010, 7:46pm
Rating: 10.0  / 10.0
I really liked this one. The art is well done the character build up is realistic. Sure it is typical in a lot of ways but it is not overly syrupy. Which is nice because I'm tired of women being portrayed as idiots and having no desire to better themselves outside of getting the man. This is a good repeat read.
Was this comment useful?  Yes