Login to add items to your list, keep track of your progress, and rate series!
Description
Tsugawa Tatsuya just lost his parents in an accident... but he's trying not to let that keep him too down as he starts high school.

While trying to obey his father's final wish for him to become an upstanding man, he ends up helping a girl who was being bullied. Despite her exceedingly cold nature, he just can't leave her alone... which may not necessarily be to his benefit, as he ends up getting wrapped up in a world where things like parasitic mind-controlling bugs exist... 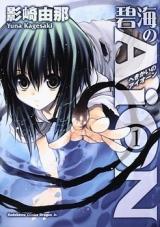 Note: You must be logged in to update information on this page.
Forum Posts Click to view the forum
Hekikai no AiON to End in July
over 10 years ago
@Ch 32, you would... [spoilers]
over 11 years ago
mermaid/merman?
over 11 years ago

Karin? Wait, no--
by xadako
June 1st, 2015, 7:24am
Rating: N/A
The thing that I realised first from this series is the main heroine herself. It resembles Karin--appearance only--in one way, a lot. Well, I think it's kind of the norm that if the girl is the strong-cold type, the main protagonist is ought to be the naive, crybaby one.
Nevertheless, I sometimes get irritated when he keeps on that "can't everyone be friends?" and "Seine-chan!" attitude, but I tolerate it because he's strong. In another way.

For the plot, I really really like it! It is very creative to use the "Seven Princess of the Seven Seas' (reminds me of Mermaid Melody tho) combines with the "Little Mermaid" story, in which the youngest mermaid lost her voice to the witch. Just like how Seine took Aion from the mermaid.

I also like the extra chapter where the story is kind of related to Chibi Vampire. I also like Chibi Vampire and still complaints about its bittersweet ending, but nah, that is for another place, another time.
Spoiler (mouse over to view)
The one thing that feels missing from this manga is the part of their last battle. It feels rushed and illogical when Ariel is attached to Seine just because she ate Shion's heart. Okay, that explains some part, but it just feels.... weird to me.

Overall, I really like this mangaka and Hekikai no Aion itself <3 Again, the mangaka managed to make such a bittersweet ending. I like it, but at the same time, I loathe it. But I guess, this kind of ending is the most fitting to close the curtain of the manga. Salute.

Revenge
by ShinyMew
October 22nd, 2013, 2:25pm
Rating: N/A
I just started this manga, and I have to say, it's quite different from what I imagined. I really thought the girl would be a new Karin in disguise, but she's opposite. This girl has...some very odd issues. REVENGE!! Yep, that's her main goal. I really like her character. She has practically nothing to do that doesn't bother killing. "Deadliness thing to a immortal is boredom," I think this is a line from the story. Her character is the black sheep out of all of the characters; sure, they are all different, but you can always spot her and her unsmiling face.
The male, forgive me I always forget names, has a harem building. Also, there must be a lot of dust floating around since you barley ever see this boy without watery eyes. He freakin' cries at least 5 times per a chapter. Well...it may be different after the timeskip, but we will just have to wait on that part.
The sisters. At first, I had a hard time knowing who was who (thank god for the translators altering the text bubbles). Now, I can tell which one is the smiling doof and the evil weak-bodied. They grew on you. I kinda missed them when they didn't appear in the chapter.
Overall romance. Didn't I say this boy has a harem?
Was this comment useful?  Yes

Chibi Vampire
by miltowner
February 7th, 2012, 9:29am
Rating: N/A
The thing that I like about this series isit'sset in the same world as Chibi-Vampire and we even get to meet Karin again.

I also like that the events of the manga actually affect the lives of the characters, so many manga have soul-shattering battles and then go to school the next day.
Was this comment useful?  Yes

Cool but...
by imercenary
January 24th, 2012, 7:30pm
Rating: 8.0  / 10.0
Great characters, but the plot is really, REALLY lacking. The story summary is actually really inaccurate after a few volumes. Without giving any spoilers, the "world" where parasitic mind-controlling bugs exist still hasn't been fully explained/fleshed out as of volume 8.
Was this comment useful?  Yes

Kinda Cool
by McCasper
November 13th, 2011, 2:16am
Rating: 7.0  / 10.0
I don't know why, but usually I have a hard time reading series with a female protagonist. Kagesaki-sensei, however, has an ability to create female protagonists that I, as a male, can actually relate to. Well there's that and the fact that this series doesn't really follow any pre-set guidelines aside from being set in a Japanese high school. Art is good, story is intriguing, characters are mostly multidimensional. Over-all, this is a good series.
Was this comment useful?  Yes

Good
by ShadowSakura
January 5th, 2011, 5:40am
Rating: 9.0  / 10.0
This manga is quite good, the characters are kinda unique [spolier]like the rich weak orphaned boy who can´t cook despise the fact that other characters with the same characteristics can cook[/spoiler]
seine is funny and cool, but she looks like a flat version of Karin. The drawing style and the story work very good together. All in all it´s a very good manga, but i just can´t fangirl about it, so 9P
Was this comment useful?  Yes

Reminded of mushi-uta with those bugs...
Was this comment useful?  Yes

pretty good
by ice_wolf007
January 19th, 2010, 8:54pm
Rating: N/A
i find this manga rather nice, the way the characters interact with each other and the way that everything works together makes it a really memorable manga. Hope that they keep coming out with translations. I know im dying to know what happens next ^^
Was this comment useful?  Yes