Login to add items to your list, keep track of your progress, and rate series!
Description
Sasshi's world is in disarray. His best gal pal, Arumi, is about to move away, and his Osaka neighborhood is being demolished in the name of urban renewal.
However, this little neighborhood has some surprises under its concrete -- it's actually a portal to parallel universes. And when this section of the city is leveled, the portal is cracked wide open. Sasshi and Arumi soon find themselves being hurtled from one strange world to the next! Making matters even more surreal, is the fact that these worlds seem to spoof and mock popular movies, video games, manga and anime. 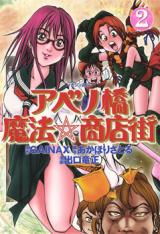 The usual anime to manga rushjob
by residentgrigo
March 13th, 2014, 1:31pm
Rating: 4.0  / 10.0
This is a crappy adaptation of a very good yet overambitious anime due to the lackluster art, the nonexistent plot or the shallow "comedy". The other one-off adaptation Abenobashi Mahou Shoutengai - Abeno Machi ni Inori wo Komete may be slightly better (5/10) but it de-evolved into an excuse for Kenji Tsuruta to draw naked women in nature fast so the original Neon Genesis Evangelion (9,5/10) manga still remains the only good manga adaptation of a Gainax anime. Read Sayonara Zetsubou Sensei (9/10) if you want to see pop culture trough manga done right.

It's a very funny romp, The plot basically tells of a boy who is saddened to find that his best (Girl) friend is moving away, This makes him realize that he won't be with the person he's most (In Love) Comfortable with. So, some bizarre situation occurs and they are transported to a world parallel to their own. Now it's a world jumping romp of fun, and it's no exaggeration, it's really fun.
Anyway Sasshi is really upset so he subconsciously holds back his desire to return to a world without his best (Girl) friend.
Apart from that visiting each different parallel world is fun, some are better than others, like the Dinosaur one was HILARIOUS! And they are very fresh cliche places from games, anime and manga.
Give it a try i recommend it!!!
Was this comment useful?  Yes

Otaku fan bait (but in a good way)
by oriana3k
June 26th, 2008, 1:05am
Rating: 7.0  / 10.0
The characters and "plot" aren't really all that exciting, so I think this series' real draw is all the parody material. I ate my nerdy heart out trying to identify all the references. Fun, but just a tiny bit frustrating sometimes.
Was this comment useful?  Yes

Abenobashi
by norakitsune
July 24th, 2006, 3:00pm
Rating: N/A
This manga version of Abenobashi makes the anime look like low-key random comedy. If you found the anime funny you will find the manga almost offensively hilarious.
Was this comment useful?  Yes