Login to add items to your list, keep track of your progress, and rate series!
Description
At Takamanohara School, lots of the students have crushes, but all on different people. In fact, if you trace out who likes who, it makes a full circle! This is the story of that circle of crushes. 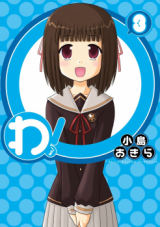 Note: You must be logged in to update information on this page.
Forum Posts Click to view the forum
Status
over 11 years ago

I didn't find it funny?
by moonmystery
July 20th, 2014, 12:15am
Rating: N/A
I understood everything (including the eroge and all that) except the two girls' jokes while sitting on the bench, but nothing was laugh out loud funny. At best, I smirked at a few pages.....

Guess this just wasn't my cup of tea?
Was this comment useful?  Yes

remarkably well done
by whitespade
August 31st, 2013, 4:22am
Rating: 9.0  / 10.0
well, i must say i really like the relationships between these characters. by themselves they are just 2 dimensional archetype that populate most manga, but their interactions brings their good points to the fore. i must say the drawing is a bit too simplistic sometimes i forget who is who, but in the end i got a good grasp of them. there are some characters i would love to know more about, like the teacher and that girly white haired guy, but i guess this manga don't want to be too burdened with characters. the break characters have quite complicated word-play gag, and initially i'm quite interested to understand the original japanese word-play but in the end i skip those parts. it's not the mangaka or the translator's fault, it just that pun is very hard to convey in another language.

all together, i think their relationships resolved beautifully if not perfectly, and a good read for any readers that like moe and 4-koma.
Was this comment useful?  Yes

Makes For A Fun Guessing Game
by hitnty
December 17th, 2012, 5:57am
Rating: 8.3  / 10.0
typical slice of life comedy with a love circle of 7 people. as i was reading it was able to calculate that there were odd # of people (3 boy, 4 girl), and that 1 lonely girl (justin bieber, where u at) will soon be heart broken, but it easy to see who it is. now the series is very funny and all the character are likable. the only bad parts are the break part which i find pretty dull.
A good read for people who like to guess who goes with who or random everyday anime shenanigans

One of the better ones
by Selenium_Glow
December 7th, 2012, 10:33am
Rating: 9.0  / 10.0
I easily gave this one a high score because the "relationship development" within the characters and the situations that instigate this were... simply awesome.

As of today I've already read it 3 times, and I'm gonna read it once more.

The gags are funny but people are slightly generic
by Hell_Clues
September 4th, 2011, 7:22pm
Rating: 8.0  / 10.0
It's a screwy bunch with exaggerated traits, not unusual for this type of gag manga. It's quite played for laughs, again not unusual.

But the writing can be quite clever though it didn't make me burst out laughing I did find my self saving and writing down a lot of pages to show to people.

I haven't tried that many 4 Koma but most of the ones I have, have been in good quality. So for me the average one of these is quite competent so far(having only discarded one series). I'd say this is between the middle of the ones I've read so far. Not as good as some but slightly better than a few others. But maybe the characters aren't quite as likeable or unique.
Was this comment useful?  Yes

Not just Moe!
by jasperv
December 23rd, 2010, 1:17pm
Rating: N/A
well to tell the truth i started reading it just for the moeness and was expecting some retarded 4koma gags but what a surprise that was...
the shounen tag is understatement you'll find clever dialogue and twisted and unpredictable developement, and i think it is one of the best 4koma i've read till now!!!
Was this comment useful?  Yes

tehe :]
by sweetbouquet
September 9th, 2010, 8:09pm
Rating: 10.0  / 10.0
i find this series just adorable! well in a weird way, everyone has a crush but their crush has a different crush...it's funny >< trust me! i really enjoy the humor from the president and vice :] it's done/read in a was similar to azumanga daioh with the four panel but it's more like a page of single conversation
Was this comment useful?  Yes