Login to add items to your list, keep track of your progress, and rate series!
Description
Shiratori Ryuji wants to become a picture book writer, and he moves to an apartment, Narutaki-So, in order to go to an art school in Tokyo. The Narutaki-so is an old Japanese style one-story house which doesn’t fit in with the urban scenery. It's owned by the cousin of his mother, but the manager of the apartment is Aoba Kozue. She is his second cousin, and they met with each other when they were children although he doesn’t remember her much. She is in the second year of a high school attached to Aoba Junior Collage.

There are five people living in Narutaki-So. First, Chanohata Tamami ... More...
Shiratori Ryuji wants to become a picture book writer, and he moves to an apartment, Narutaki-So, in order to go to an art school in Tokyo. The Narutaki-so is an old Japanese style one-story house which doesn’t fit in with the urban scenery. It's owned by the cousin of his mother, but the manager of the apartment is Aoba Kozue. She is his second cousin, and they met with each other when they were children although he doesn’t remember her much. She is in the second year of a high school attached to Aoba Junior Collage.

There are five people living in Narutaki-So. First, Chanohata Tamami is living in the room #1. She is a best friend of Kozue. Then, the resident of the room #3 is Momono Megumi. She is a kind of person who goes her own way. In the room #5, Kurosaki Sayoko and her daughter Asami are living. Asami is in the first year of a junior high. Finally, in the room #6, Haibara Yukio is living with his puppet, "Johnny".

They are all characteristic and eccentric people. However, in fact, the most eccentric person is Kozue. She has a secret; when she is shocked at something, she changes her personality. Not knowing this, Shiratori moves to Narutaki-So to realize his dream. What kind of a new life will be waiting for him? Less... 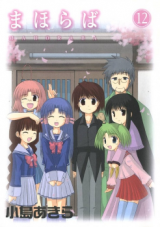 Boring first, Good second half with great ending
by Shellshock
February 20th, 2020, 2:37am
Rating: 6.0  / 10.0
Honestly i didn't like some of the characters and the first half was pretty boring. But the 2nd half is where its at. It didn't feel rushed either.

It depends on how boring you think it since some of the comedy is hit or miss. Personally i enjoyed about 30% of the comedy if you enjoy like 50% i think you'll like this series though the 2nd half makes this series worth reading Anyway
Was this comment useful?  Yes

Touching
by wurtang
May 1st, 2017, 5:14pm
Rating: 9.0  / 10.0
You cannot stop this story after you start to read it, Watch the anime adaptation years ago and always hold the manga and forgot it for long time, then searching for some good slice of life I read the name again god I cannot say how good was read this story and how much more amazing is the manga over the anime which is not bad but too different, this a series where you find calm and serenity together with some amazing jokes and heart touching moments. Specially all the characters are really good develop and with great connection between the MC´s
Was this comment useful?  Yes

The End
by Silvergoku
May 24th, 2014, 7:48am
Rating: 8.0  / 10.0
I was expecting a super ending from the hype I was reading, but to me the ending seemed good. The manga does tie loose ends and have a complete ending, and there is a bonus time gap which makes it better.

Spoiler (mouse over to view)
My only gripe with the ending is everything is solved in 1 chapter and the ending is 1 chapter, so why the 12 volumes. If a manga is going to be 12 volumes at least dedicate 1 volume as a ending.

Overall it is a good read if your into slice of life, romance genre.
Was this comment useful?  Yes

really nice read
by brunoais
July 8th, 2013, 12:04pm
Rating: N/A
I really like this manga, I just didn't give more because I didn't like the "pre" ending. About the last 3rd and 2nd chapters... I never liked that "dark" thing oh "suddenly a story" that many tend to give, never liked that. Otherwise, it's a very funny story with interesting characters where just about any single "weird thing" is explained somehow. Just try it and see if you like how the story flows and the kind of comedy this was. You will, most probably, really like it.
Was this comment useful?  Yes

Incredible story and Highly Recommended
by azngenius95
February 20th, 2012, 9:56pm
Rating: 10.0  / 10.0
I loved this manga when I was younger and I decided to revisit a bit of my manga history recently. I can completely understand why I loved this story. It was heartwarming at parts and hilarious at other yet completely pleasant any chapter of this series. After reading this a bit more matured, I've cultivated more appreciation for this beautiful tale. The artwork really suited my tastes, very adorable. The romance was slow but each step was extremely enjoyable as I writhed in happiness at every little development. The characters have such depth and the author is very creative (and rather punny too!). The whole entire process of it all is so amusing that it was impossible not to smile and chuckle at all the Mahoraba antics. I highly recommend this plot to anyone who wants to satisfy their cravings of a sappy, cute, yet meaningful story. I have only positive things to say about this manga and I hope that you will attempt to read it too! Please enjoy.

Average
by netwizard
October 29th, 2011, 10:35am
Rating: N/A
Having read first 3 ch I'd say the manga generally is about
relationships between protag and 3 personalities within 1 girl
(mb there are more of them further)
It depends on what exactly you wanna read: if you want
soft light comedy than it's yours.
What about me series didn't captivate me at all.
Dropped
Was this comment useful?  Yes

Special.
by MondSemmel
October 14th, 2011, 2:29pm
Rating: 10.0  / 10.0
This story must be (among) the pinnacle of the slice-of-life genre. Essentially all characters that appear get at least some kind of screen-time, some kind of closure/development. The main story line (Kozue's illness) is resolved to what I'd assume is everyone's satisfaction.
A positive, complete, spectacular story.
Was this comment useful?  Yes

great presentation, great ending
by connerity
February 19th, 2011, 8:19pm
Rating: 9.8  / 10.0
The story was actually done quite well, there were many foreshadowings that were referenced to way later in the story.
Every character got their own story, each was well told, leading to good character development for everyone.
No character was unlikeable.
Comedy was good.
Many experimental approches to manga presentation were woven inbetween, which was quite good, especially some of the 4koma intersections. Also totally nailed the card trick while presenting it to 8 people at once, so, good advice there!

On a sidenote, I think kuroko in to aru kagaku no railgun might be completely based on tamami, it's as if they were twins.
Was this comment useful?  Yes

nice but no substance
by ajcoolim107
October 28th, 2010, 11:32am
Rating: N/A
well it was nice slice of life experience with realistic characters i.e all girls din swoon on shiratori like love hina

here is what i think

A highly impressive piece
by Draco
June 25th, 2010, 1:07am
Rating: N/A
I am greatly pleased with this series. When I started it, I figured it would be a typical harem with a split personality twist, as I have previously seen in series before. What I ended up with, was a well told story where virtually every character had substantial growth and development. Nothing was really stagnate throughout the series. Every character had their role, and they played it well (I'm looking at you Haibara-san).
At first, I was worried that the split personality thing was going to get tired and cliché rather quick, but to the contrary, it happened so infrequently, that I was actually thinking it wasn’t happening enough. Now that I've read the story to completion, I can't help but feel that it was the right amount.
It was the perfect length as well, at 12 volumes; it paced itself well, and didn't overstay its welcome. I was never moved to the point of tears, but I felt my eye moisten slightly on no less than two occasions.
The art is humorous when simplistic, and fairly well done when more serious. Not the most beautiful piece out there, but alot more than merely "acceptable".

I don’t give 10s often, but I think this once, as a whole, deserves it.
Was this comment useful?  Yes