Login to add items to your list, keep track of your progress, and rate series!
Description
Tough, lazy, money lover, yet beautiful high school student named Shin Bia. While she's thinking about the eras she suddenly falls into that ancient time period! She had to transform into an elegant lady and while she's there she faces quite an obstacle. 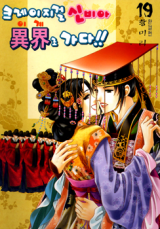 Note: You must be logged in to update information on this page.
Forum Posts Click to view the forum
Is the ending satisfying?
over 10 years ago

She devolves further and further into stupidity
by moonmystery
May 22nd, 2020, 9:12pm
Rating: 1.0  / 10.0
I was hooked at the beginning and thought Shin Bia's antics were funny, but her shticks soon got tiring to see. Characters seemed not to develop naturally, and author keeps going from 0 to 100 with no decent context to back that up. Everyone in Hwang Mi-Ri's world seems violent and psychotic. Most men seem rapey, and everyone seems violent except for some secretly plotting evil villainess pretending to be a shy damsel in distress. It's such a cliche. Pretty disappointed.

Loved this so much!!!
by VAMPIRINA
August 11th, 2019, 11:08pm
Rating: N/A
The fact that it's a Hwang Mi Ri work makes me even more proud of this masterpiece. All of her work satisfy me 100%. This is one of my fav from her. The ending was really sad though but I still loved it. I just love all the characters and plot. I've reread this manga for over 5 times now for the past 6 years, and still would never get tired of this one
Was this comment useful?  Yes

I like to know the ending
by fuuko4869
October 2nd, 2013, 6:11pm
Rating: N/A
Yes a series can either make it or break it for me depending on who the heroine ends up with.
Spoiler (mouse over to view)
I liked Mu Yeoung right from the start. Yoo Baek did nothing for me, and I didn't like how the author so obviously flattered him all the time. Shin Bia is very rude and a bit stupid but at least she's strong, and thus kinda cool. Hearing how the author makes Mu Yeoung 'lose' is makes me resent the author's power. It's just...not as realistic. ....can someone write a dj where Mu Yeoung gets his country and the girl and lives happily ever after? :3

Funny and weird
by KittyTeea
January 8th, 2012, 12:45pm
Rating: 8.5  / 10.0
I'm at chapter 4, and I have to say that I rarely comment at such an early stage but I really have to.
Spoiler (mouse over to view)
For now I like Bia, what I don't get is the prince that was supposed to be in love with the other Bia, I mean they look the same yet he doesn't recognize her, only her pendant then he starts kissing her, is he retarded? Then he comes to the conclusion that she is the one with amnesia and that kissing is the cure. Oh well, could be worst, he could be both stupid and ugly, he's just stupid.
Edit1: Chapter 8 priceless, my rating will increase at least for that scene.

Edit2: I really enjoy this story, and I like Bia, although at times, ok all the time, is very rush and kinda self-centered. Chapter 59 is the first time she actually thinks about her surroundings and the situation she is in. But for some reason, right now, I'm more interested in the second prince and his fiancee (^w^), I want more emphasis on them.

Edit3: I'm at chapter 67 and up this point I have to admit that I like a lot more prince Mu-Yeong, than Yoo-Baek. And right now I'm rooting for him, what I dislike is that I'm sure that the mangaka will do something to make him lose face, and increase Yoo-Baek's popularity, cuz dah he's the main male lead.

Edit4: Chapter 77 it turned out I was right, what a surprise jeez. I really don't like this part.

Final Edit: The story was nice, not as good as Red River, but still ok. The art was absolutely gorgeous, my fav bishie was actually Mu-Yeong. As a side note I kinda wished that he would have been the one to end with Bia, he was by far the most developed character. As for Bia, despite the somewhat negative view of the other reviewers, I really liked her. She wasn't the smartest female lead, but at least she was strong and also fallowed her heart, which is a change if you think about all the goody-goody oh so pure and noble shoujo heroines. Finally Yoo-Baek was pretty much the knight in shining armor type of character, he had very few emotional moments, few weaknesses. He was perfect, which made him perfectly boring, that's why I prefered Mu-Yeong over him.
Oh well overall it was a nice read, and I really enjoyed it.

A lot better than expected
by 1122shadows
November 23rd, 2011, 7:34am
Rating: 8.0  / 10.0
The story started off stupid but got better within a few chapters. Bai wasn't a stupid or wimpy character and it was fun watching her stand up to the female side characters. And she remained tough thoughout the chapters. Some parts were really funny too. Yoo Baek and Bai's romance was as expected for a shoujo. So overall, it was worth reading.

something is missing...
by Di27
September 2nd, 2011, 10:37am
Rating: 9.9  / 10.0
it reminds me of "RED RIVER" which is my absolute fave but i dunno this story was first i thought i'l get bored of so will read in a span of a month but turned interesting very quickly.. but i cant help but feel there are a few gaps in the ending.. felt like it was rushed so instead of a 10 i give it a 9.9
Was this comment useful?  Yes

was good :)
by purfect_kutie64
August 2nd, 2011, 12:06am
Rating: 9.5  / 10.0
spent a whole day to finish this manga. no matter the previous comments, crazy girl shin bia was a good read. it's like one of those stories that just grabs you. but there were so many things that i'd wished for while reading it. i wished that, while yoo-baek was all lovey dovey with shin bia during the first half of the series, she wouldn't be so stupid. also i would've liked to see yoo-baek and shin bia's child. lol typical but w/e.

I've met many, many dumb, reckless manga/manhwa characters, but none have chased me away from a story as Shin Bia had.

I'm quite disappointed, actually. This one truly had me hooked. She was strong, independent in the beginning, but she started to become a total baboon later on. Had her intelligence lowered? I'm quite disgusted at her continuing actions of escaping. She truly has no thought for Prince Yoo-Baek's feelings.

And ah, Prince Yoo-Baek. Please, do not get me started on him. He was quite charming, but his ignorance for Shin Bia annoyed me, but that was one trait I let slide by. Prince Mu-Yeong was interesting, actually. But when he started to fall for her... Typical story line.

Shin Bia. Well, haven't I summarized her up already? An annoying, rude, idiotic, thoughtless, reckless excuse for a character. I know some girls from mangas/manhwas are stupid, but she truly repulsed me to the bitter end. I have never felt this extreme dislike for a character before, but there's a first time for everything.

All in all, I gave this up. My extreme dislike for Shin Bia ultimately made me lose interest in this particular story. What a shame. If Shin Bia acted with more intelligence, this story would have been good. My final comment on this is, 'If you can handle the stupidity, by all means, read this manhwa.'

Nothing extraordinary
by vakegir
May 19th, 2011, 8:39am
Rating: N/A
I was a little bored, so I thought that I give this a chance.
But nothing special. Typical shoujo manga. I especially hated one part:
Spoiler (mouse over to view)
The heroine is so strong that she is jjang. But in the past she always weaker than the guys.
If you like the description and shoujo then give it a go.
Was this comment useful?  Yes