Login to add items to your list, keep track of your progress, and rate series!
Description
Shinichirou decides to look for a job in order to pay his rent, and his teacher suggests that he work for someone at their house, doing housekeeping. However, the person who hired him was Sakuya, a girl who is the 37th head of the Shimazu family, and her job is to exorcise and eliminate unwanted creatures. Shinichirou accidentally releases one of the creatures that Sakuya captures and they cooperate to catch it. A story of comedic creature hunting begins!

Note: Read this if you are confused about the chapter numbering. 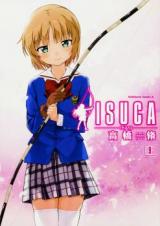 Note: You must be logged in to update information on this page.
Forum Posts Click to view the forum
Isuca Will End
over 6 years ago

*Yawn*...
by Lost Rabbit
April 17th, 2015, 10:50pm
Rating: 3.0  / 10.0
Isuca's the story of an average high school boy that gets hired as an assistant/housekeeper by a girl in his high school. Girl turns out to be an exorcist that hunts down spirits (basically youkai...?), and the guy happens to have a magic power that lets him "control" any spirit/person by knowing their "true name," which happens to involve some form of kissing.

So basically, it's an excuse for the protagonist to kiss or make out with any of the female humans and spirits that'll be part of his harem. It could be argued that Sekirei has a similar concept, yet from what I remembered, I'm pretty sure that it heavily relied on mutual feelings between a sekirei and her master, especially when they'd form a contract or unleash their ultimate powers.
Tora Kiss - A School Odyssey did something kind of similar as well, involving battles that absolutely had to have the two competitors of a battle kiss each other on the lips no matter what within 24 hours, as a way to supposedly "share their stats." As ridiculously convoluted as that idea was (as all the straight boys don't want to fight each other for obvious reasons...), I at least think it could've been used pretty comedically, especially for Isuca: Imagine the protagonist needing to kiss some incredibly hideous spirit/youkai as the ONLY way for them to win the fight and live, and of course, he'd try to stall by making up tons of excuses on the spot.
"But there HAS to be another way!!!"
"You'd rather have us all dead, instead of just kissing that thing once?"
"Uhhhh... Yeah..."

I don't see how it would be "too goofy" to have something like that in the series, especially as it continues to present the usual checklist of ecchi clichés found in every chapter to fill out its quota: The girls' clothes ripping off during battles, so many revealing panty shots, exposing nipples, the girls falling onto the protagonist to create perverse positions, etc. etc. etc.

I don't have an issue with ecchi itself, but for a series like this with very average artwork, not much humor, boring "romantic development," and an uninteresting narrative without much of an overall direction for where it's meant to head, it goes to show that not even the ecchi would be worth reading it.

Omamori Himari finally caught up to its ending a few months back, and I found it doing a better job when it came to its supernatural action and (still pretty clichéd) ecchi/romance. While u can read that as a completed series, a currently ongoing one that also does a better job is Youkai Shoujo - Monsuga. Another similar premise that has its own spirit/youkai-hunting, center-to-a-growing-harem protagonist like Isuca + Himari, and although its romance is pretty weak, the comedy, action and art are all pretty damn good in it, and the fan service can be intentionally pretty funny at times as well.

[Sidenote:] The two main girls of Isuca remind me somewhat of Asuka and Rei from Neon Genesis Evil-Gelatin (Pan Pizza [RebelTaxi on youtube], I must always call it that cause of u...). Never watched the show, but I still feel like they bear a close resemblance...
Evil-Gelatin
Not so great example from Isuca or http://www.mangahere.co/manga/isuca/v04/c039/2.html

About Average
by Banarok
July 4th, 2014, 8:16am
Rating: N/A
this can almost fall under popcorn manga you can read it and enjoy it but it's completly forgettable as soon as you put it down you wont remember squat.

It got a HUGE ammount of fan service and it would probably be better if the frames spent on it would be focused towards story instead....
Was this comment useful?  Yes

Decent manga
by andy_f
June 28th, 2014, 2:58pm
Rating: 6.0  / 10.0
The female lead is frankly very annoying and tbh i feel as though the manga would be better off without her; her role isnt anything so unique that she couldnt be replaced by another character. The rest of the cast is at the very least likeable.
The plot is abit cliche and generic but its not half bad either. Theres nothing new nor outstanding about this manga but its not bad for passing time
Was this comment useful?  Yes

Too slow.
by Jandalman
October 6th, 2013, 10:17pm
Rating: 1.0  / 10.0
The rate of chapters published for this manga is too slow to keep momentum. less than 30 pages a month if not longer is not good enough to be frank. I've already forgotten what's going on in the story by the time the next chap is out and I hate having to backtrack just to get a gist of the situation.

Seriously people who vote this 10/10 are just boys who are starved for boobs.

Dropped due to absurdly bitchy female lead
by XeroxedEchidna
May 14th, 2013, 9:02am
Rating: N/A
The heroine is by far the worst bitch of any heroine I've seen. This means a lot considering how many tsunderes I've read about. The last straw in a long chain: After a battle, the main character tries to cheer up the heroine. She slaps him offers no explanation, and as if that wasn't bad enough, after she purposefully ignores him for a few days, the mangaka acts like its his duty to apologize. Hitting a guy for accidental ecchi is one thing. Even the occasional horsewhipping can be accepted, but rampant random bitchyness in response to supportive comments is too far. She is not tsun for the sake of the hero, she is tsun for the sake of tsun. Can't justify reading a series genuinely despise the female lead, even when the rest of the series is quite good. 7.8 without female lead, barely a 3 with.
Was this comment useful?  Yes

The women? Demonic powers, magical archery, magical shields, years/decades of training and a 30+ generation family lineage with uber-financial, social and political power to go with it.

Guess who has to save the day every time?
Was this comment useful?  Yes

Horrible
by DarrisonSaber
February 22nd, 2013, 12:46pm
Rating: 5.0  / 10.0
No offense to all the reviewers below, but this is crap. The plot is really cliche, a guy with a harem fighting monsters. That pretty much summed up the entire story. Not only that, it contains a hell lot of meanigless fanservice (I enjoy fanservice but only when it's used sparingly), no character development and the characters are not realistic at all. This is like To Love-ru all over again except crappier. The only good point is the art and even that is like so so.
So unless u are like the reviewers below who enjoys story with no plot n boobs, read this. Otherwise, u should stray away cause it's a waste of time.
Was this comment useful?  Yes

It's good! Too bad they drop it!
by Laclongquan
January 4th, 2011, 8:50am
Rating: N/A
What do you mean "unnecessary fanservice/ecchi "? There's only well done scene and badly done scene and this series got all well done in that regard.

IT's fun read, all 7chapters that's been scanlated. Too bad no one pick it up after chapter 7th.
Was this comment useful?  Yes

By then it is incredibly entertaining, and has a fairly unique premise.

Trust me, give it a shot, Its very enjoyable.
Was this comment useful?  Yes

Otherwise, the story has a good grip on the reader and there is an atmosphere of suspense throughout. Read this if you're looking for some fun reading material. It's not serious (not yet... let's see how the story and characters go.)
Was this comment useful?  Yes