Login to add items to your list, keep track of your progress, and rate series!
Description
From Kirei Cake:

Alice is a senior high-school student who lives with an uncle that spends his time tormenting her everyday. One day, Alice witnesses the death of her uncle by the hands of an assassin called "Kumo" (Japanese for Arachnid). She then falls unconscious, and upon waking up, she finds out that she's in Kumo's house... Now, this Alice who no longer has any family and is being raised by the assassin herself. 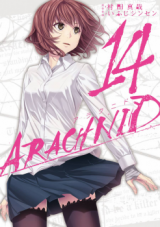 Note: You must be logged in to update information on this page.
Forum Posts Click to view the forum
I Need Some Clarification...
over 7 years ago

Not good
by Seregosa
April 15th, 2019, 11:48am
Rating: 4.0  / 10.0
It started out nicely and made me interested, but it quickly turned into pure garbage. Idiotic characters, stupid motivations, retarded actions like staying in school all the time, cringeworthy insect trivia and pretentious rape scenes galore.

It's a shounen disguised as something else. It had great potential but turned into waste. It's incredibly edgy and just feels forced and weird.

Just read something else.
Was this comment useful?  Yes

Gratuitous nudity & rape as fanservice
by ohkimch
September 2nd, 2017, 10:19am
Rating: 2.0  / 10.0
So, so much rape and unnecessary nudity. The fanservice seems less of the typical annoying ecchi variety (where the girls are sexual objects with soft, jiggly parts) and more of the creepy, this-is-what-serial-killers/rapists-would-Like variety (where the girls are attacked and actively violated). Not to mention the underage fanservice/the lolis.

Two stars for the art style that I like, & the idea of a strong female assassin MC.

Enjoyable
by kiriee
October 11th, 2015, 3:14am
Rating: 7.0  / 10.0
I agree with other reviewer it seem this is more of shounen, but regardless of what it is, this is really enjoyable to read, the last twist also caught me by surprise it was obvious now that I think about it but for reason I miss it.

Also this manga manage to make me do some google search, I always read that cockroach can survive without head but it is first time I do search about it, although that MC mental disorder turn out to be a fiction -_-.

Arachnid have many flaw but a flood of information, gore, action, and some fan service able to make me forget all of the flaw and genuinely enjoy it. By the way this author "sometimes" can draw really sexy body, not in the content that it was thinly covered but when character wore full cloth... but it rarely match it head, so it kind of funny to look

Stay in School Kids... Stay in School...
by Lost Rabbit
November 28th, 2014, 7:17pm
Rating: 5.0  / 10.0
The beginning held a "promising" set up, as our high-school girl protagonist enters the dark, illegal underworld of assassins. Although she's become one of them, she refuses to join their organization, thus sparking a big competition for pro assassins to go after her head.

Now bear with me... You have no living relatives, no friends, no money, no roof over your head, no valuables to sell, and barely any food/water left. All you have is a special weapon for performing assassinations, the skills to use said weapon, and a bounty over your head that has assassins coming to kill you in the future. If you were in this situation, would YOU go back to high school the next day, not worrying about your current situation? Well, that's what the protagonist does.
Maybe she did it to "blend in" with the other students, as after all, it is a public place.

However, the series has currently become a cluster-fuck of numerous shounen-style battles, one after another, that are all taking place in her high school during the day.
Spoiler (mouse over to view)
Even when she's given the opportunity to leave the damn high school and prevent the assassins from going after her, she refuses because she's worried that one of her friends is still in the school. [Sigh...]

Take something like Darwin's Game or Underdog, both about a protagonist that must learn "to kill or be killed" as part of a deadly game he gets stuck in, making anywhere he goes in Japan unsafe to tread. That gives the opportunity for the protagonist to meet +interact with all sorts of new friends and foes in different kinds of environments.
Arachnid though can't seem to stop clinging to its incredibly standard high school setting, having each and every battle take place in either an empty classroom, an empty nurses office, an empty hallway, an empty pool area, etc. And remember, this all takes place during the damn school day...

I'll admit, I do like some of the things the series does, where it has a female lead, insect/arachnid-themed powers, and several of the character designs that seem pretty interesting. Still, I would certainly not call it a seinen, given how poorly the characters develop, the ridiculous number of battles that seem to act like that of any other action-based shounen series, and the incredibly preposterous ways the characters manage to overcome the odds against them in a fight...

Kinda fun.
by GoldenKaos
October 10th, 2014, 2:04pm
Rating: 7.0  / 10.0
As far as badly written, relying-on-gore-and-fanservice with-psychotic-characters seinen manga go, this one's actually pretty good. By good I mean enjoyable of course, the outlandish insect-based powers these assassins come up with and the OTT action/deaths and damn weird nutjobs kept me entertained enough despite the fact that the plot and characters are pretty shallow. Or perhaps that's the point, many of the best action movies have bare bones plot and characters, so I just think this is a great stab-smash-kill fest.

Also many, many Worf Effect moments. TvTropes - "Want a quick way to show how dangerous one of your unknown characters is? Simple, make him do well or win in a fight with a character that the audience already knows is tough." So many of these that it gets amusing when they do it the next time. And how!

Many will dislike this and that's fine, it's not for everyone, the plot and character development is basic at best, bad at worst. And it earns its seinen tag. But for me I think this is just pulpy fun.
Was this comment useful?  Yes

horrible
by zeenu8skyfire
September 21st, 2014, 12:19am
Rating: N/A
this is my opinion but i think this never should have even gotten popular enough to get translated.

And the characters are always going on about how their "bug" is superior, and is full of descriptions of bugs. You'll eventually wonder if they are even human, because they take more pride in having similarities to creepy crawlies than your fellow man.

Also this has a lot of events of when humans fight each other and say stuff like spider will win against mantis and the like.

All in all its a manga about how bugs are superior to man, and a world where its typical for human assassins to take after bugs.

Interesting concept. Awful story.
by Sapphiresky
January 26th, 2014, 12:19pm
Rating: N/A
Can't believe this was written by the same person who wrote Jackals, which IMO is a great manga.

Started out like it could have been an interesting story, though the plot devices were so-so. I was kind of disappointed when I realized the 'CEC', they were going on about was just a fake version of what sounded like Aspurger's. But I could get over that.

When the lolis started to flood in and tried to rapekill the poor girl was when I said NO.

My condolences (and a few lols) to the first commenters who were looking for 'romance with assassin-san'. No. You get disturbing romance between lolis who are seriously not right in the head.

Welcome to my dropped list, Arachnid. It's filled with lots of other dark ambiance seinen manga whose plots weren't enough to keep my interest. Try not to get beat up.
Was this comment useful?  Yes

Flawed
by Uthred
October 19th, 2013, 9:39am
Rating: N/A
Have to agree witht he poster below who said that its a bit silly but entertaining and that its marred by all the rape/sexual abuse stuff. Someone is nearly gang raped or implied to have been gang raped in every volume generally for no narrative purpose whatsoever
Was this comment useful?  Yes

Love it
by shilyte
April 2nd, 2013, 4:01pm
Rating: 10.0  / 10.0
this manga is simple. simple plot simple characters simply great. sometimes you just wanna read something that doesn't require logic or deep thoughts. that's why i love this manga. i like bloody, gory, implausible mangas like these. after death note and a few others that left me feeling like i missed the point because of all the insane illogical basic rambling, this was a refreshing change. who'd have thought learning about insects could be this entertaining and easy to understand outside of the discovery channel. it's like reading about some violent insect kingdom except all the insects are in the shape of people. FUN STUFF at least for me
Was this comment useful?  Yes

If you want something weird, this could be it.
by Dright
March 15th, 2013, 2:36pm
Rating: N/A
Since I'm bored of the typical character types present in most manga, I was glad to find this manga.

It's not great from the point of view that it follows the typical shounen battle manga cliches as some have pointed out, however despite the predictable plot it has so far shown a lot of fun characters.

Now the real reason I wrote this comment: The student council head looks like Alyosha from http://www.mangaupdates.com/series.html?id=54487
Paticularly the hair (notice how the bangs cross in the middle). She's not a character you meet right away though so don't skip ahead! =D
Was this comment useful?  Yes