Login to add items to your list, keep track of your progress, and rate series!
Description
Manaka Makoto, a 24-year-old salaryman without a girlfriend, wakes up one morning suddenly changed into a female, and a knockout at that who attracts just about everyone of the opposite sex. And when he learns through a magical being that the only way he’s going to become male again is by getting aroused (as a woman) he tries to find a way back without any success. But when success finally comes and he switches back, he discovers that he will switch back and forth ANY time he gets close to someone sexually, and there are exceptions… 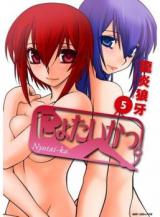 So-so
by hotarusasaki
October 15th, 2014, 9:09pm
Rating: 5.0  / 10.0
To be honest I'm not very interested in big boobs or ecchi and it's generally not the type of thing I read but I still read it till the end. It's quite interesting and I like the idea of changing roles. It's not my cup of tea yet it managed to keep me interested for 41 chapters and even got me to go "Dang, you can't stop it there." The idea is also quite unique and creative. So my conclusion is that it's good. At least it irritates me way less than stereotypical unrealistic ecchi that seems to be everywhere at times.
Was this comment useful?  Yes

Based on GENRE
by Karichan10
December 31st, 2013, 10:47pm
Rating: 8.0  / 10.0
Basing this manga on the genre, I would give it a 8.
Before jumping away, realize that gag mangas exist, but sometimes it's enjoyable to read them. The whole manga kept me interested, which is rare. I am very critical, but sometimes letting go makes for a better reading experience. If you like action packed sex and crazy women with tits, then read this.

It has humor in places that I never see. I love different stories and this one is it. A normal salary man who has no luck with girls becomes a girl himself and it goes crazy from there. He experiences all kinds of real life events along with dragging his coworker in a mess of emotions and sex. It's not hentai, but it's good enough for me. It's labeled ADULT for a reason. I enjoy ADULT humor and ADULT plot lines. If you want to complain, it's not best to do it here. I usually don't like harem or seinen, but I couldn't stop reading! It's funny, sexy, rowdy, and emotional. A true rare gem.
Was this comment useful?  Yes

I have only wasted time whit this manga. My recommendation is find some other manga to read.
Was this comment useful?  Yes

I've read up to chapter 19 and I can say without a doubt that there's nothing here that hasn't been done better elsewhere. The story is a mess of cliches. The characters are completely unlikable. The artwork is so-so. The jokes are about as stale as two week old Krispy Kreme. If you can choke down a two week old donut, lucky you but I can't do it.

The art isn't the most expressive and the action scenes are not that good. It doesn't help that the only scans online at the moment are low quality. The paneling, especially early on, makes the pages feel cluttered. More splash pages/panels would have helped immensely.