Login to add items to your list, keep track of your progress, and rate series!
Description
Based on Makoto Shinkai's film, Byousoku 5 Centimeter follows the life of Tohno Takaki, Shinozaki Akari, and Sumida Kanae. The manga follows the three and their different view points as they chronicle their way through life. 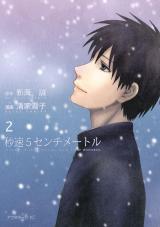 Note: You must be logged in to update information on this page.
Forum Posts Click to view the forum
Byousoku 5 Centimeter Chapter Discussions
over 2 years ago

Great story but felt a little generic
by Theoneyedsnake
July 5th, 2020, 6:22pm
Rating: 7.0  / 10.0
I liked the art, and I liked the story, but it feels like the plot centres around a topic that always seems to be used unrealistically; unable to move on because of regrets/and or unrequited love.

I don’t know how the mentality is in Japan, but it feels like a lot of manga seems to heavily imply that because you have regrets in your life, or you had a love that didn’t work out, it would take years to move on and live/love normally.

Which is simply untrue. People have a great capability of being able to move on from tragedy or heartbreak (not necessarily forget though). This is evidenced by people being able to find love after rejection or remarrying/finding new love after a death of a spouse.

The one message or topic that I did find realistic was that you sometimes need to face regrets that really hold you back someway to move forward.

Bittersweet
by BadassOtaku
April 26th, 2016, 8:25pm
Rating: 10.0  / 10.0
An excellent manga about love. I feel like it captures a reality that most in the genre don't; perhaps because it's too "sad" or "heartbreaking" as mentioned by others here.

But I don't think that's a negative. Unrequited love, distance and regrets are part of life, and this manga explores it in a short but really sweet manner. It reminded me of my own failed relationships and how emotional baggage can affect not just romance but one's life in general. We've all had struggles with direction and emotional balance in our lives. This manga just really struck a chord with me. I think I'll check out the anime and other media

Good but dissapointed
by morphin007
May 12th, 2014, 12:21pm
Rating: 8.0  / 10.0
The story and the art are pretty good.
But I was hoping for something more cheerful and sweet. It's not a sad story, but it focus mainly on past, regret and moving on from them. Maybe only the 2 last page depict a bright futur even thought it's just suggested.
So ll in all I really enjoyed the story and the ending but I'm not found of that sort of story full of melancholy and past love with a good ending that we don't see except a premise that leave everything to our fantasy. That's why I'm dissapointed.

You could said that this story is about a guy that meet 3 girls at different times of his life (young, adolescent and adult) and how they took part in his life.

conflicted
by bakerygirl
January 23rd, 2014, 2:45am
Rating: N/A
Seeing the rave comments this manga had, I decided to give it a go. It may be because I am immature ,but, I just couldn't enjoy the manga. The pace was too slow, the main character is always angst ridden, the manga itself is depressing. I can go on about the list of things that irritated me.

anyway I will try giving this manga a shot after a few years to see if I can understand what the drama's all about.
Was this comment useful?  Yes

my problem...
by jeffreymgibson
September 15th, 2013, 6:31am
Rating: N/A
The problem I have with stories like this is that either of them could of made their feelings known to the other if only they would open their mouth. Does it really take THAT much courage to tell someone you like them. No, she would rather sit in her hometown and sulk for a few years instead of gathering a small amount of courage and voicing her feelings. Even if rejected, at the very least you can close that chapter in your life and move on. its a small price to pay, but the reward could possibily be great. This type of plot is overused in manga and I no longer have any sympany for characters that wont open their mouth.
Was this comment useful?  Yes

Love it
by blackmokona
May 10th, 2011, 9:19am
Rating: 8.0  / 10.0
I have a thing against manga adapted from anime because they feel wrong footed in the medium when you see scenes you *know* work better in motion and incredibly awkward sequences that attempt and fail to create the source materials, but this is nothing like that. And it adds to the characters, especially in that the first act is much more nostalgic than the anime with the
Spoiler (mouse over to view)
first love letter thing
. It isn't as vibrant but the character designs are greatly improved -- that says more about the anime really.

What I like most about Shinkai is the atmosphere, and hey, the manga has it. Just look at the cover.

4 chapters. meh
by Famas
May 2nd, 2011, 1:19am
Rating: 9.0  / 10.0
It feels like right-holders suddenly remembered they could make more money by making copy-pasta manga-version of the anime. So they called some second-rate artist, some students to draw backgrounds for food and here we go - a manga. It's so much less than original anime.
Was this comment useful?  Yes

uhm...
by Sukets
May 1st, 2011, 8:48pm
Rating: N/A
ok... I never watched the anime, but reading the manga is enough for me not watching it so soon...
No its not bad, its just sad, really sad. And I dont want to have to be an depressive zombie for like one week right now...
Maybe in vacations, but not so soon
Was this comment useful?  Yes