Nozomu Itoshiki is depressed. Very depressed.
He’s certifiably suicidal, but he’s also the beloved schoolteacher of a class of unique students, each charming in her own way: The stalker. The shut-in. The obsessive-compulsive. The girl who comes to class every day with strange bruises. And Kafuka, the most optimistic girl in the world, who knows that every cloud has a silver lining. For all of them, it’s a special time, when the right teacher can have a lasting positive effect on their lives. But is that teacher Itoshiki, a.k.a. Zetsubou-sensei, who just wa... More...
Official English: INKR, Azuki

Nozomu Itoshiki is depressed. Very depressed.
He’s certifiably suicidal, but he’s also the beloved schoolteacher of a class of unique students, each charming in her own way: The stalker. The shut-in. The obsessive-compulsive. The girl who comes to class every day with strange bruises. And Kafuka, the most optimistic girl in the world, who knows that every cloud has a silver lining. For all of them, it’s a special time, when the right teacher can have a lasting positive effect on their lives. But is that teacher Itoshiki, a.k.a. Zetsubou-sensei, who just wants to find the perfect place to die? 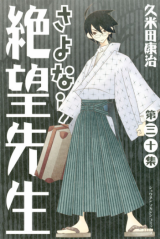 Note: You must be logged in to update information on this page.
Forum Posts Click to view the forum
Isn't the manga fully translated now?
about 1 year ago
Sayonara Zetsubo Sensei to End in 9 More Chapters
over 10 years ago
should i read or watch sayonara zetsubou sensei
over 11 years ago
Shovel, cell phone or yaoi tankobon? (Spoilers)
over 12 years ago
Characters..
over 12 years ago

A classic.
by MondSemmel
April 11th, 2021, 12:41pm
Rating: N/A
At least in its first ~4 volumes, Sayonara Zetsubou Sensei is amazing. The ratio of excellent chapters even seemed to increase with the chapter number... or its excellent chapters were preferentially scanlated. In any case, I particularly love the attention to detail in the panels, and the way the story makes fun of itself on various levels of meta.

Overall, this manga varies in quality. Its lows are boring while its highs are brilliant. It reminded me of Azumanga Daioh.

Too many references
by _kissmypiss_
February 2nd, 2021, 10:51pm
Rating: N/A
Every chapter is full for cultural references and puns.Even with the explanations it's hard to fully enjoy.
Was this comment useful?  Yes

Japanese Social and Literary History Through Satire Manga? Sweet!
by MightyMaeve
June 9th, 2010, 8:50am
Rating: N/A
I adore the stylized 1920s-esque art deco art! There are lots of silhouettes, solid shapes and simple lines, but it ends up being quite swirly, sophisticated, and expressive. So far, I've read the first three volumes put out by Del-Rey and they've done a serious attempt to convey some of the sharp satire that Kumeta-sensei's wicked wit delivers. I especially enjoyed the Japanese literary references explaining each chapter title. It was a challenging title to translate; I'm impressed. I was inspired to go off and researched quite a few of the references separately. It certainly isn't comprehensive, and it's from one man's perspective, but as far as introductions, it's a lot more approachable than a history tome of heavy, serious documentation.

As for the story, it isn't like anything I've read before. It isn't plot driven; it isn't character development driven. So does it appeal to my emotions? My sense of intrigue? Strangely, it is a very compelling read, and the characters, although mostly one-dimensional, all seem to thrive and glow as they make their humorous commentary on social issues.

So, if you love stylized art, Oscar-Wildean humour, and if you are interested in learning a little bit about Japanese social and literary history, pick it up!

Translation nonsense
by artdjmaster
November 6th, 2009, 10:00am
Rating: N/A
I disagree with the user below, akari_mizunashi, because the Del Rey translation is excellent and it would be too tedious and frustrating for the translator to translate all those meaningless signs. The translator does her best by translating the most meaningful ones, but mentions at the back of the book that most signs are just your average street signs or that the references are too obscure.

I appreciate that the author decided to include so many references, but I am not gonna start criticizing the translator for not including even the most obscure ones I'm not gonna understand anyways (and I certainly do not need the street signs translated, ugh!). At least she keeps the important ones.

After all this, I really do appreciate my Del Rey editions on my shelf because each and every one is a job well done. Picky fans can just bite the dust. The Del Rey print editions are superb.
Was this comment useful?  Yes

Bad translation
by akari_mizunashi
May 24th, 2009, 6:11pm
Rating: 9.5  / 10.0
I've been in love with Sayonara Zetsubou Sensei and Itoshiki-sensei since the scanlations first came out. The terrible hidden side of Japanese culture and mindset had left me feeling frustrated (in despair, one might say), especially how it was depicted in manga. SZS completely indulged my frustration by parodying absolutely everything in the entire country, from xenophobia to pedophilia to the suicide culture to even the panty fetishes. It's dark and inside-jokey and fantastic.

So when I saw the first two volumes for sale at my local giant chain bookstore, I was really excited. I bought them immediately and was almost as immediately disappointed. Del Rey decided not to translate the all-important background-text jokes to, as they say, "respect the artist's integrity." Then they decided to randomly choose a few of these jokes to explain in the end notes, namely the ones that had to do with Ichigo 100% and Death Note (I'm guessing they publish those). It was really a waste of money, knowing that the official translation is lazier than the scanlators that do it for free.

So if you have any taste for well-done satire and dark humor, please, read the scanlations. Buy a copy of the original Japanese if you feel like spending money. Don't buy the Del Rey translation.
Was this comment useful?  Yes

10/10 , great manga
by flamehazexxx
July 19th, 2008, 7:16pm
Rating: N/A
somone really needs to pick this up. its very funny and is one of my favorite mangas even though i usally only reade action mangas. this deffenetly gets a 10/10 im my book .
Was this comment useful?  Yes

Sayonara Zetsubou Sensei
by NightSwan
February 27th, 2008, 10:57am
Rating: 8.5  / 10.0
So so funny!
Really nice characters, and he art is likeable.
I'm not really into shounen, but this is really good!
Sensei's suicide attepmts are so funny to watch XD (ee, that's came out wierd..)
Was this comment useful?  Yes

Amazing
by Nibelhim
January 4th, 2008, 8:41pm
Rating: 10.0  / 10.0
The art work is very refreshing and simple. Very solid drawings that are beautifully made. The world is solid clear cut black and white because of the drawings and everything becomes seen as clear cut black and white. Each character is solidly themselves without and mixture of character.
Was this comment useful?  Yes

i will kill myself!!
by burn
September 23rd, 2007, 10:31am
Rating: N/A
this manga/anime is so good! so good that i laughed till i peed in my pants.
i have peedin my pant. *so embarcing thing to say front of public!, THATS IT!, I AM GONNA KILL MYSELF!*
Was this comment useful?  Yes

For whoever hasn't seen the anime yet, it's hilarious. XD Though I'm sure the manga is funnier
Was this comment useful?  Yes