Login to add items to your list, keep track of your progress, and rate series!
Description
Ashihara Himari hates men. Or rather, she doesn't understand them. In order to alleviate this problem, her friends decide that she should confess to someone. But what if that someone unexpectedly agrees...? 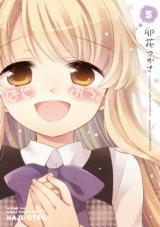 Fluffy
by Utsukushii Yume
August 24th, 2017, 11:44pm
Rating: 7.9  / 10.0
A light hearted fluffy romance without all the face palming drama. There was only one character I found annoying, but the story allowed the character to grow out of that so it was fine in the end.

I also like how Himari actually owned up to her wrong doings. She and her friends understood what they did was wrong and they didn't try to get off the hook for what they did.

I gave this a high rating b.c it was nice to see someone not try to water down something they did wrong regardless of the outcome.

Awwwww~
by nausicaa70
April 20th, 2017, 12:27pm
Rating: 9.0  / 10.0
This serie is really good. So light and peaceful ~
Characters weren't annoying at all and I loved every one of them. Their relationships (be it between friends or lovers) were adorable. Furthermore the pace was just right and everything moved on smoothly. It felt totally natural.
The romance was really well done and the fluff was great !!
Plus the art is really nice as well. There's no reason to dislike it. I really enjoyed it.

Spoiler (mouse over to view)
However I don't understand why she felt the need to tell him the "truth". That's so selfish. She was feeling guilty and she wanted that weight off her chest. Ok. But since she understood it will only hurt him why would she do it anyway ? That's so damn inconsiderate and self-centered. And anyway if she really wanted to tell him because she thought it would "get things right", first she must have told him the real TRUTH = the fact that she loves him.
Yup it started "wrong", but her feelings turned out genuine and that's the most important thing.

I would have prefer an ending like : "Well the truth is my confession back then didn't mean anything. But step by step, you opened my world and let me experience things I couldn't even have dreamt about. That happiness was unreal and amazing. Thanks for everything. I want to start for real this time. I love you. Please go out with me." <== This would have been perfect (instead of that unnecessary drama).

Nice And Light
by plotrobert
December 3rd, 2016, 10:25pm
Rating: 8.5  / 10.0
I'm surprised this is a seinen because this feels very much like a shoujo affair overall. Not that this is a bad thing, the story is nice and romantic while not being overly dramatic or silly. Plus the length works in the story's favor, just long enough where I'm satisfied while leaving me wanting just a few more chapters past the ending.

There's some minor gripes I've got with the story. For one, while I do like the characters a lot there was a bit too much emphasis on the whole "should I tell him how I feel or not" stuff. It's pretty much the only real tension the story has. So if you're the kind of person who dislikes slower stories that are mostly just people talking this may not be for you.

All that said I still highly recommend this. It's short and has characters that aren't frustrating to read about.
Was this comment useful?  Yes

Adorable
by Yamara
August 31st, 2016, 11:08pm
Rating: 9.0  / 10.0
Definitely on the sweeter side. Took away the one point simply because it uses the standard, annoying troupe of "should I say whats on my mind" for too long. Other than that, this is one of the better ones I have read in AGES. Cant recommend it enough.
Was this comment useful?  Yes

Adorable Slow Love Story
by sculamio
February 7th, 2014, 2:53pm
Rating: 8.0  / 10.0
Pure innocent, shoujo fluff right here. Yes, yes, I know it's classified as seinen, but if you've ever read series like Hibi Chouchou or Taiyou no Ie, it's got that same refreshing vibe to it. Both the male and female leads are totally inexperienced in the romance department and act pretty normally, making their interactions particularly charming (no crazy jealous tsunderes or infuriating playboys here).

If I had to compare it to a series, I'd say it's a slightly more realistic and faster version of Hibi Chouchou with less painfully shy leads.