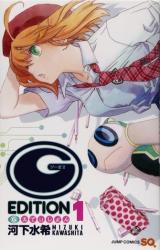 Note: You must be logged in to update information on this page.
Forum Posts Click to view the forum
Mizuki Kawashita characters
over 9 years ago

Fun, but pointless
by calstine
March 11th, 2017, 3:39pm
Rating: 6.5  / 10.0
This manga has been marked with the "Rushed Ending/Axed" category tag, and for the first time in my long manga-reading career, I can't make up my mind whether to vote it up or down. I think that in itself attests to (G) Edition's greatest flaw.

So basically, the "plot" meanders around, touches on a couple of interesting topics, shoves fanservice in your face every other page and then abruptly comes to an end. So I can't say I'm disappointed about the length, considering how doubtful it is that the story would have progressed even if its run had continued for another 5 volumes.

Overall, I don't regret reading (G) Edition at all, because it really was a lot of dumb, innocent fun, but I'd recommend it only if/when you're in the mood for ecchi and comedy with a dash of soft sci-fi on the side.

i want more!
by whitespade
October 6th, 2013, 12:16am
Rating: 8.7  / 10.0
by itself it is very good, the story is fun, the characters are interesting and i even got a little teary eyed at the end. but i wont mind several more volume of fillers, i think the mangaka will be able to make every chapter interesting. really, a good read!
Was this comment useful?  Yes

fan de Aya toujou
by kaorudojo
August 7th, 2012, 1:00pm
Rating: N/A
Hey seen some of this manga. But I could see the sadness that transmits his character, seems to be a characteristic of Kawashita. From ichigo 100% was a bit dodge pick on a manga by the author. I do not want another disappointment.
Was this comment useful?  Yes

Fun
by philip72
January 21st, 2011, 9:22pm
Rating: 10.0  / 10.0
Great stuff!
Much of Kawashita Mizuki's former ecchi shounen work was somewhat infused with typical shoujo manga maudlin bathos from her early days as Momokuri Mikan. Fortunately she has progressed over time and this manga is proof of that.

Spicy, humorous, ecchi, lighthearted and most importantly unpretentious. A relaxing and arousing read when you feel like a change from loldeep and serioubusiness.
Was this comment useful?  Yes

Funny and encouraging
by tsukasachan
August 31st, 2010, 8:09pm
Rating: N/A
This work is amazing and really funny. It seems that Kawashita sensei put many thought on this one. Maybe because the manga industry now ask for more and more ecchiness and she wanted to draw about this fact. Maybe it's autobiographic too. The heroine seems only interested on romance but she know that this theme could be rejected and the robot may be a part of the conscience who tell her that she could find the easy way to gain more money by drawing Ero manga. Anyway I found it really interesting and make me wonder about Anedoki who was maybe stopped because it wasn't enough ecchi. (That's why I found it natural that she put to be continued Maybe at the end of the chapter...) I do prefer this type of manga than ToloveRu type who sell greatly because of the nipples. Sekirei and Sora no otoshimono are great manga too but i do prefer KM sensei manga for the romance aspect.
Was this comment useful?  Yes