Login to add items to your list, keep track of your progress, and rate series!
Description
From Evil Flowers:

During their senior trip on the cruise ship Victoria, a group of friends is suddenly pulled back in time and separated. The main character, Hayumi Natsuki, arrives in the year 1636. In Japanese history, Christian rebels, led by a young man known as Amakusa Shirou, revolted in 1637, which resulted in thousands of casualties.

However, when Natsuki arrives in the past, she and her friend Eri discover that Shirou Tokisada is already dead. Meanwhile, Natsuki, according to the villagers and Shirou’s parents, looks exactly like their late son (disregarding the fact that Natsuki... More...
From Evil Flowers:

During their senior trip on the cruise ship Victoria, a group of friends is suddenly pulled back in time and separated. The main character, Hayumi Natsuki, arrives in the year 1636. In Japanese history, Christian rebels, led by a young man known as Amakusa Shirou, revolted in 1637, which resulted in thousands of casualties.

However, when Natsuki arrives in the past, she and her friend Eri discover that Shirou Tokisada is already dead. Meanwhile, Natsuki, according to the villagers and Shirou’s parents, looks exactly like their late son (disregarding the fact that Natsuki is female).

Natsuki, the kendo champion of her school and heir to her family’s Hakuhouryuu kendo style, simply cannot stand by and watch innocent people be persecuted simply for being Christian. Soon she even becomes known as an angel, sent from God, whose arrival was prophesied 25 years earlier. But what will she do when old friends become new enemies? Less... 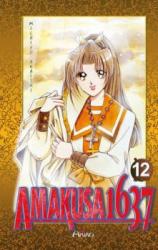 Wonderful!
by Pantherocker
February 10th, 2016, 6:42pm
Rating: 10.0  / 10.0
This manga surprised me when I started reading it. I rarely see a manga labeled "historical" that actually has this level of real history in it. Not to mention that it is on a topic that many people know little about - - the spreading of Christianity (Catholicism only actually, although that is not mentioned in the manga) in Japan and the heavy persecution and massacres of the followers of the faith. Fortunately, this is an alternative history, and our heroine and group showing up has changed the course of history as it was. Also fortunately (because it would be gross), left out are many of the more horrible tortures that were done to Christians. Other historical representations (starvation, infanticide) are also accurate but toned down to be less gruesome (thankfully).

The characters are nice too. While some characters remain in the background, it seems that they each have their own part to play, and the primary characters are all well developed. There is one part that gives me pause in the character scoring, but it must just be the power of friendship! No, not really. I wish that part had been more drawn out but it did allow the story to advance more quickly.

The story (without the history) would be an interesting read on its own. A group of teens thrown into the past--a time full of war and starvation. Main character is thrown into the role of hero and leader of the people. She wants to stop the upcoming rebellion she knows will lead to a massacre. With the help of her friends, new and old, she sets out to achieve this goal. However, some of the companions from her time have arrived before her and taken up roles in the world that make them her opposition, and she will have to make them come to their senses before moving on to her goal of changing history.

I recommend this for anyone who is a fan of a historical setting, an actual history, or wants to know more about Christianity in Japan. Of course, if you aren't a history freak like me, the story is good enough to keep you reading! It reminds me of Basara.

I'm in love with history hence 10/10.
Was this comment useful?  Yes

Hmm...
by Rebekahs5
February 22nd, 2015, 11:54am
Rating: N/A
I picked this up a while ago and am interested in reading it again, but am unsure as I notice it hasn't had any scanlations released for some time and unfortunately I can't read Japanese. From what I can remember, I did like it (I bookmarked it on my computer, I rarely do that)... Still I hate it when I wait and wait and the scanlators have dropped it, I hope this isn't the case with this manga. :/
Was this comment useful?  Yes

I feel really sad for some reason when I see the guys who were older and the girls who were younger. It makes me feel really sorry for them. I mean the guys lived for years in a world different than their own and grew older, yet the girls stayed young and innocent. I felt even more upset when it came to Miyamoto. We know he loves her yet .... and he gives that woman up...I just... It makes me feel so sad.

I like it, but I don't want to experiance these conflicted emotions. I really hate the amnesia part because everytime I see it happen, the person always gives up the people they "love" for the one they did love.

This can't compare to Saver. Not even in the slightest.
Was this comment useful?  Yes

I like it!
by japangirl401
September 13th, 2011, 10:22pm
Rating: N/A
From what I've read up until now, I am totally in love! The art isn't the best but it manages to capture your attention! I'm pretty sure once more chapters are released and the story is able to develop more than Amakusa 1637 will have much more for us readers! <3
Was this comment useful?  Yes

...
by dreamer00013
February 10th, 2010, 9:02am
Rating: 2.0  / 10.0
it's boring. Just so boring.
The art is average, the story is plain & the usual story (it reminds me of an author called Hohlbein - he made a story the same way. Throw in a guy/gal in a new world, throw others in who were with her but came sooner than her to the other world.)
Bang. That's the story.
The characters aren't interesting in any way and well.... I've found nothing about this manga that would want me to read on. After only two chapters is this manga over for me.

And even after reading Laclongquans comment I've got no idea how 11(!) people can like this series so much to give it a rating of 10 points.
Was this comment useful?  Yes

I should give a raving review to this manga. I really should. But it's only 4 chapters now, a review is a bit too early. So I will give some impressions, preview if you will.

If we had to categorize this manga, you can say it's Alternate History, and Time Travel . It means that characters was thrown back in time, to another universe pretty similar to their own. Historical events tend to happen the same but they can change it.IT will depend on the efforts of main characters.

Art: the art is simply beautiful. you could say it's the best of AKAISHI Michiyo so far. Clear and clean, the drawings are nice to the eyes.

Storyline: interesting so far. With four, five characters so far, the mangaka has a broad space to spun the tales in 3 different lines. We will have to wait to see how that develop.

An interesting sidenote: the link between Miyamoto Musashi and Amakusa also was mentioned in Hagane manga.

Characters: Strong boys and girls, and I dont mean muscles. they are high school students, 18 at best, thrown back in time to another place and they can still keep their heads. Even a girl, Eri, look a girly and weak, has a fierce determination. I like strong character and Akaishi Michiyo doesnt disappoint me.

Well, enough of that. Now I will go bug the hell out of the group to make them release faster.