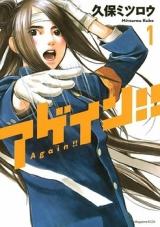 Ending invalidates everything.
by Neofit
July 13th, 2022, 12:05pm
Rating: 7.0  / 10.0
It was a good read for a while, but it winds down starting at the middle point and then the ending comes out of nowhere and essentially invalidates everything that happened in the story. I felt like it wasted my time with that conclusion.
Was this comment useful?  Yes

Good for first half and not good at the end
by Raiden94
May 16th, 2022, 6:36pm
Rating: N/A
A really good read at the beginning but later near at the end it started to get boring.
I have to force myself to finish it.
Was this comment useful?  Yes

Solid series with a weak ending that just ends. Implied shit is for losers.
by Shellshock
May 13th, 2021, 10:40pm
Rating: 7.0  / 10.0
This series is about a a guy who had 0 friends throughout his entire high school. One of his regrets that the male cheerleading squad (Ouedan) which is run by a woman was disbanded. Now after an accidental slip he falls back in time to the very first time he entered school. Alongside this other girl who also slipped into the past with him when he tumbled he will try his best to somehow make sure that the Ouedan doesn't fall this time.

The series is split into 3 arcs essentially. The Ouedan arc. The Drama Club arc. And the final arc. The first 2 arcs are as solid as you'd expect. The plot progression is constantly moving forward, urging you to want to know what happens next.

I really found the characters to be unique and interesting here. Yes they do fall under some stereotypes. But i think the author's done an excellent job of making them feel like people rather than just existences in a manga. They get annoyed with each other. They are hypocritical, they are mean, they are nice. They act like what there environment tells them to do. Basically they act like teenagers.

Granted it still has the problem where Highschool is like basically life and death of your entire future thing than manga series seem to do. But yeah overall i would say an interesting and fun way to showcase a teenagers life.

I also like the slight maturity on our main character. He is in fact nearly 19 years old and from the future so he has that slight edge. And he desperately tries to make do with it.

I do think it is a bit BS that the male lead never thought about going back in time and using his knowledge for selfish gains. Which is pretty BS i'd say.

There are also some other issues like there is an entire pregnancy chapter only to be revealed that it was a dream all along or smth. Like why waste time on bullshit like these if there is going to be absolutely nothing to gain from it. There is no pay off. Nothing interesting in that chapter. It just feels useless and unnecessary. This happens twice more i think. So again quite ridicolous.

There is also the ending being quite disappointing. Like it just ends. Very underwhelming. There is also the romance being a factor in the entire series but no pay off to back that shit up. Yeah it does the whole implied shit. But its still annoying it pulls that shit.

Despite these issues. I'd still recommend the manga. Its got great character development, interesting characters, and a good use of 2nd chance. I think it sorta fails on you know giving any negatives to the bully of the manga as well as some over the top spectacle like a women confessing while doing a naked handstand. Yes this is in the manga. But it feels so out of place you know? Like the author just wanted to draw a naked woman lmao.Lets not forget that it never explains the supernatural bullshit either.

Its funny though in regards to ending. You can exactly see when the axe happened lol.

Waste of time
by Sburator
March 15th, 2020, 5:24pm
Rating: 1.0  / 10.0
It has an interesting premise, there were good and bad plots, but the ending destroys all the good that this manga managed to achieve
Spoiler (mouse over to view)
In the end even the protagonist believes that the whole story was useless.
He don't learn anything other than believe in/love yourself.
In a manga with the focus on time travel and changing your life, the moral of the story is that: "it's better to not know the future"; it is so ridiculous that makes me hate myself for reading all the chapters.
Was this comment useful?  Yes

Extra Good
by cecropiamoth
November 7th, 2018, 5:24pm
Rating: 9.0  / 10.0
The creator of this manga understands how people's emotions and group situations interact—that is, he understand group dynamics. That means he has been able to work out a plot that makes sense for a classic Come from Behind Story. The cheering squad is dying AND this traditionally all-male institutions is led by a woman, AND she's a very intense, demanding leader.

Doomed, right? Just watch as the MC plays a big part in bringing it back to life (still led by its domineering head, and she even begins to change a bit). Side characters are fun and funny, and the drawing expresses the intense feeling of a cheer squad and the student body being led by it, perfectly.

Trash
by Loki666
November 1st, 2016, 2:02am
Rating: 2.0  / 10.0
Read at your own risk. I post this comment to recommend that you don't, no matter how much you like the premise. I will say that it began quite well and the plot was consistent for a few volumes (up to volume 7) with some character development.

That is all the compliment this manga will get. The manga is horribly plotted, this is not a slice of life manga but a shounen/romance. The author began this work to exert a meaning of somewhat but instead a good premise for a manga began rolling in the wrong direction; it is a mass of trash that keeps accumulating as chapters pass.

In the end this manga is nothing but a waste of time, a hulking pile of trash and I have no clue how some people rate this 10/10.

Great read.
by jjm152
November 20th, 2015, 3:51pm
Rating: 9.0  / 10.0
I'm still waiting for the volume 10 translations to come out (I hope they do) but so far this has been one of the most enthralling manga series I've read in a long time. I have to admit that I don't understand the people who complain about "filler" content here because nothing really exists like that. Maybe they are just complaining that not every arc is dedicated to advancing some sort of romantic sub plot - fair enough, but Again!! is not really a "romance" centered manga.

Sure there are some elements of romance in the story, but primarily this manga is about the concept of "What if you could go back and change yourself in highschool and get rid of your regrets?" and to that end, it's a perfect combination of fantasy and comedy. All of the other contents of the manga from romances, to clubs, to friendships and the such exist only as a vehicle to explore the maturing behavior of Imamura as he struggles to break out of his shell.

I can't wait for the next three volumes of this manga to come out. This is one of those manga that if it was licensed in English, I would definitely buy all the volumes just to have on my shelf.

A solid read
by great_k
March 25th, 2015, 6:44am
Rating: 8.0  / 10.0
Again's positive points are its great art and unique characters.
The characters are so full of life and I love how Kubo Mitsurou draws his female characters.
Most time travel stories focus on changing a violent incident or getting together with a past crush.
In Again it focuses on an anti social guy who travels back in time and decides to use the opportunity to change himself. We get to see him use his experiences as an advantage in the past and also how his actions alter the lives of those he gets involved with.
Makes for an interesting read.
Was this comment useful?  Yes

Good stuff.
by Akiradesu
February 20th, 2015, 2:19am
Rating: 10.0  / 10.0
Good stuff, as in... Veryyyy goooooooood stuff. As in cream puff goooooood. As in peanut butter gooooooood.
It's like being negative while staying positive.
Was this comment useful?  Yes