Login to add items to your list, keep track of your progress, and rate series!
Description
Kitamura Koh has known the Tsukishima family for years. One of the Tsukishima daughters was even born on the exact same date as Koh! What will become of Koh when his best friend is no longer around? 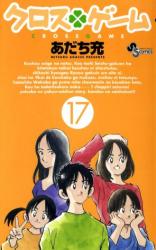 Disappointing
by yuri999
August 23rd, 2020, 2:29pm
Rating: 4.0  / 10.0
In Cross Game Adachi relies way too much on fourth wall breaks and similar gags to handwave away cliches, plot contrivances or explanations and Cross Game suffers a lot from it's overuse. He was always a fun of fourth wall breaking but over here it looks as if he either just doesn't give a toss or is too lazy to show regular plot progression. A majority of the the time the jokes overshoot their mark and end up as dead space. The pacing was really off in the entire manga and events that needed some more time were jossed over while others that didn't were given too much time.
Was this comment useful?  Yes

It's really a good manga
by k3ltfalcon
April 5th, 2020, 6:11pm
Rating: 9.0  / 10.0
I enjoy this manga. His art, his style and his humor are quite good. I start to learn baseball rules because I want to understand more of this manga. Sometimes, I get lost because I'm not familiar with baseball. In my country, baseball is unpopular, I don't think we have a baseball team in my country. Everyone talk about soccer and of course I love soccer. But beside that, I love this manga. I really enjoy his storytelling. I feel the love from KO with Aoba, even they don't have to tell. I am an asian, so I understand asian culture. We don't expression the love like the way in USA. In last chapter, I want KO said he love Aoba. But with his ending, I feel love even more. He just holding her hand and wait for a train. It's so touching. When Aoba said he is the people she hate the most in the world. He just talk: she a good liar. So touching in many level.
When I read it, I listen with Chinese music, this feeling even is stronger. If you try to read it for the first time, you should read it and listen to chinese music, such as "reverse (live version)". You can feel the story even more.
Was this comment useful?  Yes

Pretty damn good
by nail80
September 24th, 2014, 10:51am
Rating: 10.0  / 10.0
I was very surprised with Cross Game when I read it a year ago, behind the cool art I was expecting a bit of a shallow story.
Boy was I in the wrong, it turned out that Cross Game was high on drama and excitement. It didn't really play like I predicted, and that means it is good. That characters while simplistic get good development and the pace of the story was nice.
Probably one of the greatest manga I've read.
Was this comment useful?  Yes

Touch, H2 and Cross Game are all very similar in both Character Designs and Relationship and that odd bount of sport called "Baseball" but each story of his has unique Twist to differentiate it from one another and create a Classic Tale out of it

Seriously Adachi knows how to write an engaging story like no other, probably the Best Sports mangaka coupled with Rom-Com factor ever

Look forward to more of his Future work coz remember Adachi NEVER DISAPPOINTS....EVER!

Near perfection
by Verix
March 15th, 2012, 1:08pm
Rating: 9.5  / 10.0
Probably my favorite Adachi manga, and overall definitely one of my favorite manga. I liked the anime even more. ONE complaint: could have had a juicier ending. After all that you'd expect some more love in the air. Oh well, one can have some imagination. Oh, and I also found the doppelganger girl a bit unnecessary. Nothing too annoying, though.

The feelings this manga conveys right from the start volume 1 are definitely one of a kind. Not too many manga manage to have you entirely attached to the main characters in such a short time span. The character development is amazing, too. Highly recommended to either read or watch Cross Game at least once.

I'm surprised at everything. I changed my mind, all of it.

The ending i think, is a kind of the open ending. I'd love to read more and more about Aoba and Koh mutual love, but it ends so soon, that somehow makes everyone feel disappointed so i understand why. If only Adachi sensei made some epilogues in 5 or 10 years later, it would be great.

Somewhat of a disappointment (though it depends on a person's tastes).
by Tsuchikage
January 6th, 2012, 11:21pm
Rating: N/A
I was particularly disappointed with the ending. But aside from that matter, this one really doesn't give much focus at all to any romance whatsoever. It's not so much subtle, as there is just less focus on the relationship between the main characters.
Was this comment useful?  Yes

The best of Adachi's works
by Phooeyish
November 4th, 2011, 4:35pm
Rating: 10.0  / 10.0
In my opinion, Cross Game is probably Adachi's best work to date. Like his previous works, it has a great plot, appealing characters, and a never-ending stream of funny situations. However what Cross Game has that the other mangas lack, is polish. Don't get me wrong, Adachi is a fantastic mangaka and his other works are great. But to me, they've always felt unfinished--like they're missing something more, an extra 'omph' factor. In this manga, Adachi finally achieves perfection.

For me, I think the greatest aspect of this manga was how he manages to presents the story in such a way that it never seems superfluous, cliched, or awkward. The plot was always engaging, the dry humour always managed to get a laugh out of me, and in the end, the manga left me completely satisfied despite it's ambiguous ending. I hate to put labels on things, but honestly? This might be one of my favorite mangas ever.

For last 5 years, I had ignored him ..... and now I am his fan (best Sports with slice of life romance...his works).
Was this comment useful?  Yes

Good Humor
by merlockmagus
May 1st, 2011, 11:03pm
Rating: 10.0  / 10.0
Ah, such good, curt jokes. I wish more manga had this style of humor. I've read far too much manga with panties showing, nosebleeds, or other gag gimmicks for comedy. This doesn't do any of that, but is still on-key with the humor.

The dynamic relationships between the characters is really pleasing too. Although it kind of focuses on Kitamura Koh and the Tsukishima family, the other characters are just as fun to watch and listen to. The mangaka Adachi really understands how people interact, I think.