Login to add items to your list, keep track of your progress, and rate series!
Description
Because of changes in seating arrangements, high school student Tsuda ended up behind the quiet and expressionless Endou. Their interaction is born from a trivial incident, and he begins to see Endou who he has never gotten to know before. That mole, slender nape, and soft hair. The subtle faces that he makes and little changes in his attitude. But Tsuda, who used to be indifferent about others and never made any deep connections, now feels impatient about the distance between him and Endou, who he has been gradually getting closer to. What on earth is drawing these feelings? 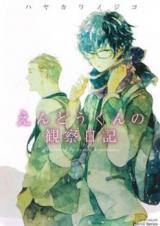 This manga was simple as a story but also unique and refreshing in the way it was done, from how feelings and thoughts were subtly and indirectly expressed in the artwork and the pacing, mixed with scarce words and expressions that in reality held a lot of meanings...

A story was told and feelings were conveyed and expressed with minimum dialoged...I really enjoyed it and will check out the sequels and the other author's work.
Was this comment useful?  Yes

So short...and
by Terwa
July 7th, 2020, 2:16am
Rating: N/A
I want more ,the story was short while there's more can be tell.The way the writer did the story line made it feel like different plot from other similar yaoi manga,the only objective,although it did't effect the story from my point of view,the missed up events and dialogue the writer would done better job in giving a little clarifying view of the scene
love it great story lovable characters
Was this comment useful?  Yes

Hayakawa Nojiko-sensei is GOD
by toastmuncher
December 26th, 2016, 3:02pm
Rating: 10.0  / 10.0
How can anyone not love Hayakawa Nojiko-sensei is beyond comprehension to me. Every single panel, and character movement in this manga is not only absolutely gorgeous but essential. Really, I can't find a single flaw here. Not one.
What I loved most was the (sexual) tension that undergrid the character's interaction with each other. I couldn't stop "kyaaaaa!!" and hitting my head on the wall. SO CUTE (>.>)
Was this comment useful?  Yes

goddang tease!
by whitespade
May 7th, 2015, 4:08am
Rating: 9.0  / 10.0
thank god theres sequel or im gonna cry, so sweet. love the characters and the art. the pacing and panelling can be off, sometimes i lose track what's going on. overall so mellow.
Was this comment useful?  Yes

It was sweet
by aiish
January 10th, 2014, 5:44am
Rating: 9.0  / 10.0
Very cute. Pretty repetitive in the context but makes it poet in a way. I guess Endou liked Tsuda way longer then huh. Endou's hair really does look soft, like a Yorkie, probably hahha. I liked Tsuda with his hair down. The hair cut scene was funny.
Was this comment useful?  Yes

I just LOVE this manga so badly
by OmNom
October 16th, 2013, 11:03pm
Rating: 10.0  / 10.0
I don't want to spoil it for everyone so I'm going to be brief, but I seriously can't help myself squealing at how much I love this manga and Hayakawa Nojiko-sensei. She truly managed to leave a deep impression on me with this series particularly. While one might find it hard to read through all her panels I had no trouble at all, in fact I often found myself lingering at a spot once in a while just to truly savour and admire her beautiful artwork, and I did that with a passion.

PS: The sexual tension is just flying off the hook. I'm eagerly waiting for a group to pick up the sequel to this one and see how things'll turn out, hopefully we'd finally be able to see some real 'actions'.
Was this comment useful?  Yes

Very cute
by sofistree
August 27th, 2013, 8:11pm
Rating: 9.0  / 10.0
The plot is simple - if you're looking for elaborate declarations of love and jealousy, this is not it. This is quiet and lovely and relies not on dialog but on scenes and expressions and basically reading in between the (few) lines.

It feels a bit like watching snow fall at night. It has that kind of atmosphere. It was really nice.

I like how this author gets us to the people getting together (it's always done so wonderfully), but I also kinda wish we could see what happens AFTER. But that's probably a whole other story.
Was this comment useful?  Yes

very simple and subtle
by gwkimmy
February 20th, 2013, 7:38am
Rating: N/A
i found this manga almost...poetic in its presentation of images and the paneling. dialogue is limited since the mains themselves aren't the type to talk much, but so much is expressed in how they see one another and the things that are going on in the background (the kiss on the train platform scene comes to mind) that you feel instead of know what is going on in the character's minds. i agree with the character chiba and infinity that the kiss was freaking HOT. and this is just a shounen ai ;_; i also love the way the minor characters were constructed and characterized. they grow on you as well.
Was this comment useful?  Yes

really fun
by blu_papillon
September 15th, 2012, 10:38am
Rating: 9.0  / 10.0
this was just plain fun to read! I love stories that deviate from the same-old-same old yaoi story. This was like a gulp of fresh air! Ugh, and that kiss at the end! The couple's chemistry is just so captivating. I love the characters, too. No one is just a charaicature, every1 has a purpose. Anyway, read it. It'll make your day better.
Was this comment useful?  Yes

Symbolism much? I thought this was really fascinating....
by infinity9001
April 13th, 2012, 11:05pm
Rating: 9.0  / 10.0
I don't think this is the most accessible manga out there in terms of that there's so much subtle meaning in each panel and the way the story is told is completely out of wack. Most people are going to dismiss this as boring (not that there's anything wrong w/ this opinion), but for people who like those mangas that are crazy weird this is a must read.

It's a very surreal manga (i.e. Oyasumi Punpun or Annarasumunara), and quite often you'll see that what Endou and Tsuda are feeling isn't said but is expressed through pictures. Like the whole first scene when Tsuda suddenly sees Endou being twisted into some sort of pseudo-sexual position can be taken as the beginnings of his attraction to Endou. I could honestly write about 15 pages of analysis for all the subtle/surrealistic elements I saw in this. If you want a fairly straightforward manga that you don't have to sit around and analyze then this is not for you.

On the whole, I thought that Endou had quite a bit of character development for such a short series, and Tsuda was much more than just a cardboard cut-out of a character. And man oh man, is their chemistry hot. I'm ok reading through hardcore yaoi and then I read this kiss scene and I'm like "WOAW THERE." That kiss scene was probably one of the most sensual I've ever read.

Overall, I felt it was a fairly nice read that made me sit around and think for a bit. Sure it's not perfect and it's not the best BL out there, but for me, it definitely was not boring. It's a polarizing manga, just like surrealism as a genre is. Try out it, and you might end up with something you really like. Don't go in expecting the same old angst found in BL about high school students.