Related Series
Tsurugi no Joou to Rakuin no Ko (Spin-Off) 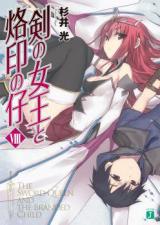 Note: You must be logged in to update information on this page.
Forum Posts Click to view the forum
Why is it a tragedy?
over 7 years ago

Not at All Stereotypical
by blackluna
December 26th, 2017, 4:30pm
Rating: 9.0  / 10.0
While a pervious commenter referred to this novel as a stereotypical shounen, I honestly can't see that at all (much less a typical shounen romance). Both protagonists a far from "normal teenagers," and their personalities are in accord with their backgrounds and stage of life. The female protagonist is determined to achieve her long-held goal, even as a part of her wants to give up, and, to that end, she is willing to do anything. The male protagonist, on the other hand, had all that he cared for snatched up by the "brand" (a process with continues to occur) and ultimately becomes set on protecting and staying by the side of the one person who won't succumb to it. Even during to course of the first novel, both protagonists show a little development, thus far their interactions have mainly consisted of their beginning to open up to each other (which is very important considering their pasts). The other reoccurring characters are likewise interesting, or, in the case of the villains, horrifying. The plot is interesting, and none of the plot twists come out of the blue, in fact, this series has a lot going on beneath the surface. There are a few minor inconsistencies, but these seem to have been created in translation. It's hard to say anymore than this, as only one and a half volumes have been translated. Still, it has had a promising start.

A good concept wasted by falling into stereotypes.
by Randomfart
November 14th, 2012, 8:10am
Rating: 6.0  / 10.0
I don't know about this series. The first chapter really has the potential and hope for this series to be unique, but then it regresses to your typical shounen/romance nonsense directly after. The main character is too one dimensional, ruined by the authors desire to give him a "normal teenager" personality when it simply doesn't make sense at all in the context of his backstory.
As I said, as the series turns into a generic shounen/romance the potential for meaningful storytelling that is in the "beast" is more or less ignored, and quickly focuses on other things with the most interesting aspect of the story quickly fading into the background. Also worth mentioning is that so far the character interaction has been disappointing repeatedly coming across cliches and "mind reading". There are other gripes I have with this particular series but as it's still in such an early stage I'll hold off for now but I doubt I'll read more than this 1 volume.

Interesting
by Rac
October 4th, 2012, 8:21am
Rating: 8.0  / 10.0
Well,I can't say much about this series at the moment since there's only been 5 chapters translated so far,but this series shows us good promise.
For starters,Chris is not the normal week shounen hero who gets his but kicked at the begining and then trains like there's no tomorrow to beet the villain for his nakama(not yet atleast).Both leads are strong from the begining(for an example, both leads can fight against an army single handedly and slughter them all).But after their meeting some circumstances that made the two suffer individually vanishes,at the same time making both of them somewhat vulnerable.After that they heavily rely on each other for comfort.That's the basic platform of the Novel.
(Chris' background is somewhat similar to Ryner lute BTW)
In conclusion,This is worth giving a shot.It's different and I think you want be disapointed if you like action,romance stories.
Was this comment useful?  Yes