Kako fell in love with Kouta, a guy who saved her in a mixer while she's posing as a 22-year-old girl, only to find out the next day that he's a police officer. Just when they were getting closer, he realized she's a high school student and distanced himself from her. But Kako continued her advances and accidentally got injured. Will he give into his feelings and keep this high school girl by his side inspite of being a policeman? 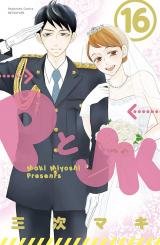 It's gotten really stupid...
by FredFriendly
March 31st, 2019, 10:55am
Rating: 1.0  / 10.0
Seeing the most recent review here was 2 years ago, I thought I'd do a bit of an update. The series has gone from fairly enjoyable for the first 10 or 15 chapters, to barely tolerable for the next forty chapters, to unbelievably stupid in the most recent chapter at the time of this comment (chapter 55). The mangaka has decided to make Kako one of, if not the most detestable FMCs in any series of this ilk. For me, Kako has gone from someone I wouldn't wanna associate with in school, to someone that I positively hate to the extent that nothing she could do in the future could redeem her in my eyes. Am I being too harsh? Nope, not one bit.

edit: It's been over a year since my last comment (above), and the series has finally finished at chapter 60. And, no, Kako did not redeem herself in my eyes and she still remains the most detestable FMC in any "romance" series I've read.

YESSSS
by Himeowchama
April 1st, 2017, 5:56am
Rating: 10.0  / 10.0
WHAT I LOVE ABOUT THIS MANGA:
-The heroine looks like a pushover BUT SHE'S NOT!!!! SHE'S NOT WEAK OR WHATEVER. SHE PROTECTED HER LOVED ONE WITHOUT HESITATION. SHE MIGHT BE.A LITTLE BRATTY AHD SUBBORN, BUT THAT"S KINDA LIKE HOW A NORMAL TEENAGER ACTS LOL.
-The lead male looks like an asshole BUT HE'S NOT. HE CONSIDERS HIS PAST MISTAKES AS A DISADVANTAGE BUT IT'S THE REASON FOR WHO HE IS TODAY. I LOOOVE THE FACT THAT HE DOESN'T MINGLE HIS PERSONAL AFFAIRS WITH HIS WORK BUT AT THE SAME TIME HE PROTECTS KAKO.
-The second lead was an asshole at first BUT AS TIME PASSES BY, HE GETS TO BE THE SWEETEST SECOND LEAD I'VE EVER ENCOUNTERED. HE'S PROBABLY ONE OF THE BEST SECOND LEAD IMO. He respects the relationship between Kouta and Kako and doesn't even push Kako around. I could honestly say that he deserves a happy life (especially lovelife!!!)

Spoiler (mouse over to view)
I LOVE HOW KOUTA ASKED KAKO TO MARRY HIM. IT MIGHT BE A MISTAKE TO MARRY SOMEONE WITHOUT REALLY KNOWING THEM, BUT IT'S WHAT THE LAW ALLOWS IN ORDER FOR THEM TO DATE. Also, I love how Kouta respects Kako and doesn't force himself on her. It's probably one of the mangas upside
Was this comment useful?  Yes

The story is about a high school girl and a policeman and their blossoming relationship. Unlike a lot of age gap romance manga with a high school girl theme it doesn't beat around the bush for volumes on end as the male lead struggles with how much older he is, after a few chapters or so they decide to embrace their feelings for each other and thus the bulk of the storyline exists mostly 'after the fact' or so to speak.
I love the comedy and the drama, there are tense moments and lighthearted moments, and since it's still ongoing there's a lot of promise for where it might go from here.

My only concern is that the mangaka might make the mistake of dragging the story on for far too long. I think it could go for another three or four volumes perhaps, but it definitely shouldn't try to do a Skip Beat.

I like
by theabbster1
December 7th, 2014, 9:38pm
Rating: N/A
I think this manga is super cute. Many dokidoki moments to get you excited. And the female isn't stupid or clumsy. She really grows on you just wait. She's not weak, but rather headstrong. Male lead is beautiful. hahah yeah so if you're into shoujo romance, give it a try!
Was this comment useful?  Yes

Lovely
by wallyakazukin
November 21st, 2014, 1:56pm
Rating: 10.0  / 10.0
It's sooo sweet and light hearted, and getting better and better as the chapter goes on. The comedy was here, the story serves nothing unrealistic. The fluffy feeling was on the right portion, and the newest case I read (now i'm on ch 16) made me think that this shojo manga could be more interesting and meaningful. And last, the art is clean and adorable
Was this comment useful?  Yes

light hearted, fast paced and good artwork
by Phosu
August 23rd, 2014, 6:18am
Rating: 8.0  / 10.0
i've read alot of shoujo mangas and most of them have the same formula where the girl is dimwitted, falls for a guy, 20 chs later they finally get together and have alot of cliched subplots.
This one is abit similar to the typical shoujo stories out there but the great thing is that the story is fast paced...each chapter covers a mini-plot and it never gets dragged out to the next chapter.
Plus its the first time i'm seeing a pairing with a police officer and a high school girl...unlike teacherxstudent or nursexstudent.
Since its a light-hearted shoujo, dont expect a strong plot-line or much character development.
Was this comment useful?  Yes