Login to add items to your list, keep track of your progress, and rate series!
Description
The twins Maria and Noel have always lived together and are very closely linked. When Maria decides to enter Morinomiya School because of the beautiful eyes of its basketball coach, Noel, who refuses to be separated from his sister, decides to enter the same establishment. Unfortunately, there are no spots left for boys. He thus decides to pass himself off as a girl! But school life is not easy when one must constantly play in a comedy! Especially when Noel rapidly falls in love with Miyu, a fellow classmate, while he himself is courted by another student. 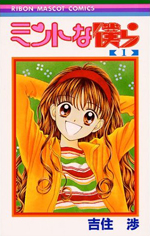 Note: You must be logged in to update information on this page.
Forum Posts Click to view the forum
Left to right not right to left?
over 14 years ago

I reread it and remember that kiss behind the hat. It was a cute read.

Better than expected
by YuriTachikawa
August 26th, 2020, 7:07am
Rating: 8.0  / 10.0
Even for middle-schoolers, there were too many misunderstandings lining up, and at times the female twin was really annoying but that's puberty I guess. Other than that, conflicts and stereotypes were handled well. The art is cute and the comedy well served.
Was this comment useful?  Yes

I also think that other issues (possible dramatic situations) are dealt with quite well unlike other shoujos. The misunderstandings are not dragged out too long that you feel like strangling something.... and I like it that the characters TALK TO EACH OTHER rather than assuming things and the issues get bigger and bigger, not to mention longer time to resolve (like most shoujo ~_~)

bottom line is,....I can accept this story as they do learn from their mistakes despite their young age and I like it that the characters are honest. A light and nice read, not too stretch out. ^_^

Eh.
by Sphear
February 24th, 2014, 5:05pm
Rating: N/A
1. I didn't hate Maria but the way she dealt with romance was pretty shit.
2. All romantic developments were kinda mediocre.
3. Cute, simple, fluffy. Obviously meant for younger readers.
4. Better than average, interesting to some degree but poorly constructed plot and character development.
5. Read it for teh laffs
Was this comment useful?  Yes

1. I really did get to hate Maria.
2. Noel is just the cutest thing.
3. The ending is not ideal (way too abrupt and who Maria ended up with...)
4. One of the best shoujo gender-bender out there.

All in all it was very fun and light read, the only bad thing in it is Maria's take on love.
Was this comment useful?  Yes

*As for the reason, it's bc the shoujo art style makes the whole cross dressing part look smooth and not gross or weird. Yet this manga is the only gender bender I've seen that brings up the physical difficulties for a young male to pass by as a female.
Was this comment useful?  Yes

Tsk tsk tsk
by melchel
June 3rd, 2012, 8:55am
Rating: N/A
I really liked the manga but I just hated how the belittled the meaning of 'love' I hated the whole jumping from one guy to tue next with one of the characters but one of them was
Loyal so that as oka
Was this comment useful?  Yes

Could've been better...
by maiathegreat
May 1st, 2012, 6:36am
Rating: N/A
I read this just to kill time and I have to say that it was really amusing at first. However, by the end it just sort of turned out really annoying. I personally like the humor in this one, but the romance? Not so much. Every character is just so inconsistent that it's become annoying (except for Noel who was the only character I actually liked all throughout the story) Plus, there came a time where the series just stopped being interesting, and everything just went downhill.

Overall, it's a good read even though I had to endure the irritating parts. But if you hate stories with disappointing endings, I recommend you not to read this series.
Was this comment useful?  Yes

Love it
by Mangafan54
April 8th, 2010, 3:13pm
Rating: 10.0  / 10.0
I usually don't like gender bender mangas, but I love this manga, its so cute and funny! ^.^ It makes me laugh all the time.The drawings were really good too. And i love the relationship between Maria and Sasa! And Noel is so adorable and funny!

7/10
by danielabda
July 4th, 2009, 1:10am
Rating: N/A
So far i found it funny...Im barely at the point where he reveals to sasa that hes a guy...EPIC moment.! Geez...taking a year break from manga really helps lower ones standards...I've read 3 shoujos in 2 days and Im a guy who usually likes shonen..I feel refreshed somehow.

Edit- I felt as though the ending was incomplete. It was a nice overall manga, confused sometimes with who was who, but overall the feel was okay.