Login to add items to your list, keep track of your progress, and rate series!
Description
Official English: INKR

From Kodansha:
Alita wakes up alone in the sky city of Tiphares, her brain and body reconstructed by the mad scientist Desty Nova. There’s no time to wonder why Alita’s greatest enemy would resurrect her, though – the royal city has been thrown into chaos by Nova’s revelation that the Tiphareans have had their brains replaced by bio-chips! Everyone needs answers – and Alita will fight to get them

Note: The Ultrajump phases are out of sync with the volume phases by +5 so Phase 93 from the volume release is phase 98 from the Ultrajump ... More...
Official English: INKR

From Kodansha:
Alita wakes up alone in the sky city of Tiphares, her brain and body reconstructed by the mad scientist Desty Nova. There’s no time to wonder why Alita’s greatest enemy would resurrect her, though – the royal city has been thrown into chaos by Nova’s revelation that the Tiphareans have had their brains replaced by bio-chips! Everyone needs answers – and Alita will fight to get them 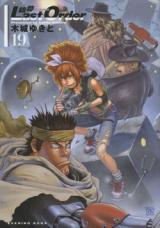 Last Order is a manga with great potential, but badly executed!
by whitemanga
July 17th, 2019, 7:20pm
Rating: N/A
If any of you have read Alita, you probably know that Yukito Kishiro made and excellent job in creating a dystopian world so real and so many characters, villains, heroes, weaklings...The first time I read this manga I was a teen, and I was so surprised to read something like this: all I had read before was Dragon Ball (Z) and not much more, this was really something on another level. Now, the fact that Alita Is a masterpiece Is undisputable, you can argue what you want, but the first Alita Is almost a masterpiece. I said almost, mainly because of the ending, that feels a bit rushed (but it's great nonetheless!). At the time Kishiro wanted to end the manga, he was probably too tired to continue, both mentally and phisically. He had to put an end to Alita's story. And so he did. This was a decision he probably regretted some years later, but After Alita he started a new series, which was really interesting, and was nothing like the cyberpunk world in which Alita lived. Unfortunately, Aqua Knight wasn't too popular, and It was suspended after a couple of volumes. Kishiro said he wanted to continue it in the future, but we're in 2019, and the guy Is still busy with Alita.
Yeah, Alita, after all she was his most successful character, and he didn't like how her fate was handled the first time. Moreover he had so many leftover ideas to expand the world of Alita: After Salem there was Jeru, and then Mars, Venus and all the other planets of the solar system. This meant so many stories to tell, so many new characters and battles to draw.
And so he began Last Order, erasing almost all that happened in the past volume of Alita, and introducing new characters. I can't complain much about the new ones, some are good, interesting, inique, but other are dull, boring, absurd (for example the space karateka). I think the lowest point of Last Order is the ZOT tournament, where things go absolutely crazy and it's like the author doesn't care anymore, he doesn't have good ideas, he just wants to add pages and pages to this mess.
And then there are the vampires... yes, vampires in the world of Alita, in a cyberpunk futuristico world! What. The. Actual. F*ck! At this point it was clear that this wasn't the world of Alita that I loved so much anymore, this was some kind of desperate move of Kishiro to stay relevant, to be successful again, to be liked by kids like One Piece or some other shounen manga. Unfortunately for him I don't think It worked too well... unfortunately for us we now have a sh*tty Alita sequel that is really a waste of time and money. And, as I said earlier, Kishiro is doing now a sequel/prequel of this sequel, which seems a bit better, but still not good as the original Alita.
Beware of those mangaka who don't know when it's time to forget their past works, and start something new, something fresh!
Was this comment useful?  Yes

An amazing and different successor to battle angel alita
by red-eyed-slayer
April 10th, 2016, 11:13pm
Rating: 10.0  / 10.0
Battle Angel Alita Last Order, is not recommended for those who don't want something different to its predecessor and for those who hate tournament. Now for those who have an open mind, will enjoy this stellar, as it provide a lot but interesting details that just adds more to the world of Battle Angel Alita, and doesn't always focus on the main character as this series gives other characters more chances to shine which I personally like.

Plus the author refuses to use the same formula for his arcs, as each of them he wents to make something new for the battle angel Alita series.

It's writing style is similar to Hunter x Hunter and it's still amazing if you're willing to accept that it's different.
Was this comment useful?  Yes

just ok
by liontaraki
November 27th, 2013, 7:35pm
Rating: 4.0  / 10.0
This manga is an alternative/ 18 (so far) volumes-long ending of "Battle angel Alita". The art has improved but I still don't know what's the point of Alita's journey and find it hard to understand why Alita goes through all these hardships for people she hardly knows, even though she admits she's not the good Samaritan in life. Nevertheless, all the side-stories that appear in the manga are really interesting like the vampire arc, toji's past, etc. The battle scenes are, also, far better that those in the prequel: there's more detail, more awesome moves, new and different opponents each time. Overall, it is a nice read.

Timeline
by Hollowminion
October 16th, 2013, 4:38pm
Rating: 10.0  / 10.0
Bit of information that will help new readers to understand the timeline of GUNNM and GUNNM: LO better, GUNNM (the first one) was originally sopposed to be longer that it currently was, however the auther fell ill and as a result of this finished the manga earlier than expected as he wasn't sure if it would ever be finished, after he recovered he started GUNNM: LO, this was the continuation to how GUNNM was supposed to go, as a result of this GUNNM: LO is the effectivly the true story after volume 9 chapter 4 of GUNNM. Hope this helps guys

This does by no means make it a bad manga, rather, it seems to have a much higher quality than most mainstream manga do.
There are however some arguable negative effects this "conversion" has, for example, there is a lot of action and less character development, the art is good but generic and the story isn't as emotionally engaging most of the time, unlike the original GUNNM. The combat seems to be kind of turn based, what with technique names, it's just not as organic as it was in the first series, but as I already said, the quality is quite high. It does still occasionally display the old emotional brilliance, it's just gotten a bit rare.


I find I'm actually not at all disappointed, even though I suppose it's kinda sad that GUNNM: LO has lost a lot of the uniqueness GUNMM had.

Last Order is definitely a worth a read and I don't regret reading it. If you don't dislike mainstream manga, you'll find one of almost unrivaled excellence in Battle Angel Alita: Last Order.

I would like to give it a 10 out of 10, but I've already given that the prequel. Since GUNNM: LO is not as good as GUNNM, all I can give it is around an eight, though it would deserve a 100 out of 10 compared to most mainstream mangas. No, that wasn't a typo.

good action, but crazy
by goldminer
October 23rd, 2010, 10:17am
Rating: 6.0  / 10.0
It has more action then the predecessor. More of the insane people and craziness of the world that can only exist in the mangaka's mind. The characters have totally screwed up personalities (worse then in the first manga). It goes like this: I like you today, but tomorrow I'll smash you to shreds. What the...

Lost it's unique charm
by Deva
May 7th, 2010, 4:18am
Rating: 8.0  / 10.0
It is a really nice scifi manga with beautiful art, interesting characters and intriguing themes. The plot takes a nice pace, unfortunately it has lost most of it's former unique charm. BAA had a crude art style was sometimes confusing and weird but in every page you could sense the mangakas compassion and heart. This manga is high standard action/scifi but it feels like so many others in this genre...
Was this comment useful?  Yes

A decent read.
by Zantam03
November 28th, 2009, 2:58am
Rating: 7.5  / 10.0
I was quite disappointed with this. I loved the first series and I had really taken a liking to Alita, but in this volume she's just not so cute anymore. Furthermore this series focusses too much on fighting. Techniques even have names... Still a good read though, but I miss the old Alita.
Was this comment useful?  Yes

probably 2nd best sci-fi manga i read
by wall
May 22nd, 2009, 5:54am
Rating: N/A
Love this manga but even i am giving it 9,0 it is (for me) a little more than half as good as original.
Too many power-ups, complicated techniques, complicated explanations. Too long jump outs from alita especialy last volumes where she wasnt even 1/3 of the time.
The art is technicaly better but the magic is gone, especially drawings of alita ( she is not that cute anymore + dont like that cat costume from last volumes).

but thats all i can sense.. still 2times better than average manga. give it a try

after finishing reading the original
Was this comment useful?  Yes

Ten years with Alita.
by Kamugin
May 2nd, 2009, 6:10pm
Rating: 8.0  / 10.0
Ten years is the time I'm following Alita's path and until now Yukito Kishiro's masterpiece keeps its strenght, originality and awesomeness. Alita is the best well developed manga character I've found, I love her! Thank you Kishiro sensei!
Was this comment useful?  Yes