A disillusioned young man in search of “something” stumbles into the weird and wacky world of Wonderland, where, as “Alice,” he is thrust into a murderous game of “Kill the White Rabbit” by command of the ruler of the land, the Queen of Hearts. But while Alice rails against the role that has been forced upon him, he has little choice but to comply. For in Wonderland, not sticking to the script can have deadly consequences… 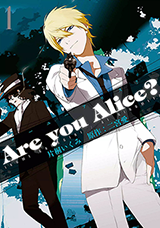 That aside, the art was beautiful. The plot had many flaws, but it was mysterious nonetheless.

A new wonderland
by otakulalaland
August 20th, 2013, 11:57pm
Rating: 8.0  / 10.0
The characters in this manga are awesome but you hardly know anything about them. Giving you a reason to read it more. It's a manga any Alice fan should read
Review http://otakulalaland.blogspot.com/2012/12/are-you-alice.html
Was this comment useful?  Yes

great combo
by namu76
November 16th, 2012, 4:36am
Rating: 9.5  / 10.0
I think ninomiya ai and katagiri ikumi made really great combo of author and artist. the story is bizarre in good way, while the art is beatiful and odd at the same time. well, "odd" isn't really the right word, but I couldn't find any word best suited to describe the feeling I got when reading this manga.
when I read this, I don't feel like I'm reading a manga. rather, I feel like I'm watching a movie, given the point of view....ugh...well, just check it yourself.

I'd like to give this 10, but...I hate I got to say that I find "the wonderland rule" thing is somehow defect...
I guess nobody's perfect after all (especially given that it seems like Ninomiya ai works at several series at one time...who knows?)

well, in the end, this is still a very good series, with good mysteries. so, give it a try
Was this comment useful?  Yes

Convoluted and Confusing, in the best of ways
by Suxinn
July 8th, 2012, 5:52am
Rating: 9.4  / 10.0
Honestly, one of the best Alice in Wonderland adaptations I have ever read. In fact, off the top of my head, I cannot think of a single other adaptation that has topped it thus far.

It's also, without a doubt, the most confusing and convoluted manga I have ever read. In a good way.

Are You Alice? is definitely not one of those stories. This is a manga that knows precisely what it's doing, and all confusion (and, boy, is there a lot of confusion) is completely intentional. Each chapter delivers answers, certainly, but these answers are followed by more questions and more confusion, to the point that I'm not even sure I can trust the answers that were previously given! And that mystery is truly where Are You Alice? shines. It knows how to give just the right amount of info to keep the reader intrigued, all the while not giving too much away, and all the while hinting that nothing is really as it seems. It helps that the art is absolutely amazing too.

The only concern I have right now is that the ending won't meet up to the expectations brought on by the story. But, with such a well-thought out story like this, it doesn't seem likely that the ending will be very disappointing. (And, at five volumes, the end does not even seem to be in sight, so that's a really far away concern, regardless.)

So, to sum up, like everyone else has mentioned, Are You Alice? is a manga with a very deep, involved, and complex plot. It's confusing, it's crazy, and it's wonderful. Read it. You won't regret it.

edit: Now that I've finished the series, I'm left with some mixed feelings. This is definitely an instance of the mystery being more interesting than the ultimate reveal. Regardless, the ending was fitting, and it gave me heartwarming feelings considering how long I've been reading this. It's not a perfect series, by any means, though I enjoyed how it followed its own internal logic until the end.

I would tentatively recommend this one, with caveats.

Another Retelling of AiW
by CCheshire
March 16th, 2012, 7:44pm
Rating: N/A
Story: A young man finds himself in a strange place and is ordered to find the White Rabbit. He travels around and slowly discover's his past and the real story about wonderland.

Characters: As expected many references to AiW characters, some are personified with rabbit/cat ears and speak in riddles. Alice himself is quite active as he moves around the place looking for clues about his identity. It's a little frustrating in beginning as all the side characters don't reveal much useful information to the reader.

Art: Clean line art and it's easy to tell the characters apart from the background. The setting is similar to a story book, as it switches often around from location from chapter to chapter. I like the different chapter cover pages because they are different from the usual characters randomly standing around.

Overall: Worth a read if you're a fan of AiW manga adaptations and mysteries. Although, I admit at times I was confused with the story line .-.

Interesting and fresh
by vanillamochi
July 14th, 2011, 12:19am
Rating: 10.0  / 10.0
A new and different take on the story of Alice in Wonderland. The characters are all intriguing, albeit dark at times. The story is mysterious and suspenseful, and the plot doesn't follow very closely like alot of other Alice in Wonderland themed books. It can be very confusing but I love it anyway.
The art is amazing. I loved the substitute Alice and Alice, Mad Hatter, and all of the characters... are just so complex. I hope this runs long enough that the ending won't have to be rushed, because everything is building up quite nicely.
Was this comment useful?  Yes

Interesting
by promise2sweet
March 11th, 2011, 12:49pm
Rating: 10.0  / 10.0
It took me a bit to get into the story - you are dropped right into the middle of the story and, just like Alice, must try to understand the rules and characters of Wonderland. At first I was a little put off and confused, but the more I read, the more I enjoyed the story. This is definitely not the traditional version of Alice in Wonderland! As an added bonus, the artwork is beautiful.
Was this comment useful?  Yes

Great Twist on a Classic
by FeyPhantom
February 5th, 2011, 4:28pm
Rating: 10.0  / 10.0
Mystery is definitely the key ingredient here. It has many twists on the original story of Alice in Wonderland and about just as many bishounen characters. As was said before: every character has their own story and background. The relationships are also very complex and intriguing. Overall, it's a story which leaves the reader guessing as to what exactly is happening in this "Wonderland" and what brought the main character there in the first place.

Great art [hot, cute, and pretty guys for all as well!], interesting and complex plot, and an interesting play on the original story which could appeal to both fans of the original Alice in Wonderland and those who never liked it much or don't know it. Definitely recommended to those who like a good mystery that makes you think.
Was this comment useful?  Yes

very...
by sweetnsour321
July 8th, 2010, 6:46pm
Rating: 10.0  / 10.0
It's very interesting. It's all a mystery, every character knows and has a secret. The true purpose of 'Alice' is a bit unclear, I have a feeling theres more behind "alice". A somewhat darkish/mystery, everything is like a puzzle. The main character has his own secret(past) that only reveals in small hints. I never read anything like this. It's hard to put into words to describe this manga. I never read any "alice and wonderland" themed manga with such a twisting mystery(in my opinion) and characters. It's not for every one, usually people think alice and wonderland themed manga is all frills or something(well from what I read). But this one gives a dark vibe feeling manga. I can't describe it. but it is dark (because of the mystery) compared to most 'alice and wonderland' themed manga's. it's different...even though mystery isn't listed in there I feel like it should...Well I find it a worthy read, if you have time. I will say it's not for everyone(don't worry it's NO where close to horror.)I regret not picking this up sooner, the summary didn't attract me but when I read it it was totally different from what I imagined. I know I'm jumping around, but it's really hard to put this manga in words (in my opinon). To sum it up it's really good and interesting