I died of a young age in my previous life, but unknowingly I went back in time to the past where dynasties still existed. However, this was not even a blessing. The me from that life died, killed by her own husband, the emperor. And now, I am reborn into a little girl, who is the sister of the emperor?! 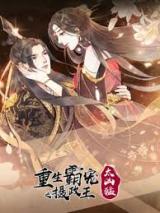 Well, he's.. over protective, but like, I dunno if it's always good.
Spoiler (mouse over to view)
Threatening to hurt innocent people to make her stay is not really nice.

The beginning's cute. The latest / middle chapters are so-so, in my opinion.

I'm a sucker
by theLettuceGarden04
April 19th, 2021, 1:24pm
Rating: N/A
Despite of the rant below me, which I also agree on, I like this. It has most of things I look in shoujo romance:
-Possessive male lead
-Male lead simping for fl
-An actual competent female lead (even beyond ch 76)
-An interesting enough story
-Big improvement on art (except it has a bit of a same face syndrome)
-Female lead not super OP

I definitely agree that the male lead is quiet off putting, but my love for pseudo incest, possessive men, with simp energy overrules it haha 😛. If you're like me and enjoy that, then great. But if it's not your thing, I completely understand. The female lead really makes this manhua though. She definitely carries it. Love seeing competent women doing her thing and even stay competent even when her possessive love interest ties her down. I felt that she didn't downgrade at all after seemingly falling for him now (as of ch 98). I usually see a lot of cool leads like her lose their touch after she hooks up with the ML, but I don't think it will happen here, but I'll edit my comment when I read further.
Was this comment useful?  Yes

& I thought the ML was rlly cute & likable for a while. Actually, up until about ch55 I would have given this series a 7.5-8 out of 10. Ch55-76 ruined my good impression of the series though.

Gong Jue devolves into the stereotypical overbearing ML with no respect for Yimo’s choices, her goals, & her autonomy. His oppressive & all-consuming obsession reduces her to nothing but the object of his affections, to be kept/protected/controlled. All he cares about is keeping her His & only His 😬

Also, the whole “MLs must overpower FLs” law came into full swing. Manhandling & pressing her down against her will became way too common. & she lost the social/financial/physical advantages she’d worked for just as he (ML) came into power — coincidentally just in time to set up the usual gender dynamic as the “romance” began.

Times Gong Jue (ML) disappointed me:
Spoiler (mouse over to view)
1: Another male character pts out Yimo shouldn’t be caged like a pet bird. Jue reacts by agreeing she’s exceptional then thinking that’s why she has to be restrained, so she won’t go & attract other men. Or, god forbid, fall in love w another man.
2: replies that since everything she’s gained/worked for has been for him, she should be willing to give it all up if he wants her to
3: orders guards at residence to keep her from leaving the premises w/o his permission. Guards “let her go” out of respect/fear for prince, bc he wouldn’t like it if they hurt her. Somehow erasing all the times she’s handily beat the tar out of ppl who’ve gotten in her way before & reducing her to her value to Jue (she had conveniently lost her titles & status by this pt. Perfectly in a position to be defined by her importance to the men)
4: coughs up blood & accuses of her being cruel when she says she wants to keep their sibling relationship
5: pretends to accept her rejection then DRUGS her. Tells her he can’t hold back, & it’ll be ok if they just use contraception (he still thinks they’re blood-related)

& i won’t lie. The reader comments insinuating she was “leading the males on” “being cruel” “ruthlessly breaking their hearts” or in any way obligated to return their romantic affections made it worse. She sacrificed so much for these men, & ppl had the gall to say she was cruel or ruthless for wanting to keep the friendship or pseudo-siblingship platonic. 🤦🏻♀️