Login to add items to your list, keep track of your progress, and rate series!
Description
Moriya, a former boxer, and Watase, who left the yakuza after watching Moriya's match. Two strangers, who, after a traffic accident, find themselves at zero point, a place between life and death. There, they're offered a way to rejoin the living by a mysterious woman.

"Together, let's come back alive from zero point" 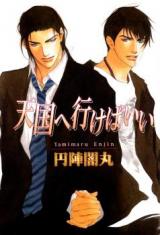 Unexpectedly I like that Akutsu guy best.
by jongjongie
May 15th, 2016, 9:18am
Rating: 7.0  / 10.0
The two protagonists didn't convey their feeling well enough, still the "lack of depth" matter. But Akutsu seems interesting to me, the story about him could have been better.
Was this comment useful?  Yes

Meh. I've read worse.
by kazekeshi
November 3rd, 2013, 12:50am
Rating: 6.5  / 10.0
Only one sex scene happens, and it wasn't really...sex in a way as most was pretty implied. The pretty artwork made me want to read it the first place (and how I find it in the first place), and it's what got me through the end. Anyways, pretty interesting read, but as one of the other reviews said, it ended before it even started. I really like the idea in the manga of time traveling and such as that's pretty unique itself especially in a yaoi manga, but the way it was developed and told was just so boring and uninteresting. For each coming chapter, I really expected something that never came.

Feels Unfinished
by whydontyoujustsay
July 16th, 2013, 11:32pm
Rating: N/A
I don't usually like supernatural-type mangas, but for some reason I was really getting into this one... but it never really came together. It just seems like it's getting started, and then it's over. Pretty disappointing.
Was this comment useful?  Yes

Shoots for the stars, but barely makes it out of the atmosphere
by PansyWansyLinsy
March 9th, 2013, 5:33pm
Rating: 6.5  / 10.0
There was wasted potential here. I didn't have any expectations when I started reading this; at every page, every chapter, I wanted to really like this manga. Where Enjin-sensei succeeds is her beautiful artwork and a very interesting, if not ambitious premise. It’s not often you come across a sci-fi themed romance in manga, and even more so in yaoi. Yet, the story becomes a muddled mess partway through. It could have been saved if there had been some scorching smut to balance things out, but the tacked on obligatory not-very explicit sex scene at the end did very little if anything to redeem a pretty lackluster romance.

My chief complaint with this manga was the underwhelming development of the romance. Watase's presence in the latter chapters isn't very strong and I didn't get a good feel for his character at all. Moriya realizes his feelings early on and the build-up of his unrequited feelings was well-done. With the direction the story was taking, there was a sense that things were leading up to a dramatic climax. Alas, it was not meant to be, and once you’ve read it, you’ll understand why. The inevitable confession and Watase’s realization of his own feelings was both anti-climactic and devoid of any tangible passion. All of a sudden, he’s like, I was doing this because I wanted to be like you and I guess I love you? What, how romantic is that?

There was a strong sense of a story unfulfilled or maybe unfinished. Of the number of themes she attempts to cram into the story, why didn’t she make better use of the themes of destiny and fate? When she first introduced the characters as “partners,” I thought that perhaps that both would come to realize that they perhaps they were destined soul mates and that fate had taken a hand to give them a second chance to be with one another. The whole red string theory and so on. It’s not original, but it would have been a lot more interesting than what we got.

Some of the paneling was confusing too and to what purpose was there for making Moriya a werewolf and having him collect semen? I can understand a vampire collecting blood, but why semen for a werewolf? It was a bit fanservish and usually I’m willing to overlook things like that if I enjoyed the material overall, but seeing as a I didn’t, I guess I’ll be nitpicky.

There was an attempt to create something original here, and for that I didn’t rate this as low as others. The pieces were there, but the execution was extremely lacking. Although my review is pretty critical, I still think it was worth reading and good for anyone that’s looking to pass some time. For the art alone, it’s worth trying.

Like nothing you've read before! :D
by streetwalker
October 30th, 2011, 1:00am
Rating: 10.0  / 10.0
This was so amazing! First of all the art is amazing, really enjoyable. The characters are also likable and I loved watching how they both changed. There was definitely character growth and both Moriya and Watase had a considerable amount of depth to them considering the over all feel of the story. I mean, aliens? Werewolves and vampires!? It was so weird but in a good way... And the plot was actually really good, amazingly! The internal dialogue was good and I'm a sucker for people pining for their loved ones when the feelings might actually be requited... The themes touched upon were also really interesting. So if you can just get past the initial randomness of the setting, the story as a whole is truly intriguing! AMAZING! (Did I already say that? lol) Highly recommended! 10/10.

Good!
by Namiya
August 30th, 2011, 11:40pm
Rating: 10.0  / 10.0
The art is great, no doubt about it.
Story wise, I expected an okay manga. After the first pages I thought "what the heck is going on there?!" but it became quite funny and entertaining. I didn't find the story to be confusing but it's not something to just quickly read through. Also it's something not to take too seriously. It was a nice mixture of (dark) humor and drama and it kept me excited to read through to the end.
I'd recommend this to anyone who wants to read a totally different BL story for once (and don't take it too seriously!)
Was this comment useful?  Yes

Quirky and Fun
by Sasageru
May 26th, 2011, 3:56pm
Rating: 9.0  / 10.0
xD Have to say i laughed. First of all, aliens, yay, second of all, their tasks...lol. And finally, it was predictable in the final chapter what was going to happen but it was nice to be right. I enjoyed this, it was funny, random and had some good moments. Aside from all that the art is also very good and the story is original - got to give it dibs for that even if it was a bit random in its choice of originality haha
Was this comment useful?  Yes

?
by sallyen
December 9th, 2010, 7:35pm
Rating: 5.0  / 10.0
I agree with CuthienSilmeriel.
The art is really nice~ Gorgeous art. Handsome men, really.. Beautifully drawn and all, but the plot however is really lacking. I mean, I sometimes read yaoi just for the smut, but this manga doesn't have much for yaoi-fans or for those who actually cares about plot. The plot is confusing and not well thought-out.

I wouldn't read this again.
Was this comment useful?  Yes

Liked it
by Dysterium
December 12th, 2009, 6:13pm
Rating: N/A
The art is nice and the plot isn't confusing at all. It is rather unconventional for a yaoi manga. People might be bothered by it's weirdness, but I kind of like the way it's unique.

It's a manga that should be read at a slow pace to understand and an open mind to appreciate. It's not your ordinary love story, which is kind of why it's easy to either love or hate.

10/10 because it was refreshing to read something totally different.
Was this comment useful?  Yes

Far-fetched
by CuthienSilmeriel
July 17th, 2009, 5:47pm
Rating: 4.0  / 10.0
Ok the story is so far-fetched it's difficult to believe. The art is good and the yaoi isn't much, which is good for me but would probably disappoint yaoi fans. I didn't find it that confusing but the ending was probably the worst I've ever read. It wasn't an ending at all, more like Enjin-sensei just dropped it half way through. There was a lot of wasted potential as well. It touched on some deep topics and emotions such as fate, devotion but doesn't delve into them enough to drag up the plot.

Spoiler (highlight to view)
The Vampire thing was barely plausible but a werewolf collecting sperm was just ridiculous and there were inconsistencies. One minute the woman is an alien looking to save earth from it's own lack of resources and next she's like a spolit brat playing with her favourite toys. Her presence is not explained except as being a flaky excuse for the protagonists' actions.

All in all this could have been so much better. The plot may have worked if it had been presented better and more realistically and if more emotion and development was given to the characters. Ironically it's short size is the only reason I completed this but is also the reason it's so unsatisfactory.
Was this comment useful?  Yes