Login to add items to your list, keep track of your progress, and rate series!
Description
1. Teirui Makura
Popular honor student little brother, Yuua, and his kind older brother, Seigo. One step ahead in the puberty department, Seigo tries to put a little distance between him and his cute little brother. However, the innocent little brother is to blame with his defenseless skinship. Finally, Seigo's lust consumes him and he can't endure anymore. Once Yuua accepted that idea, his desire to be attached to his brother grew stronger every day.

4. Choroize! Jigoku
A constant failure at job interviews thanks to his scary expression, Danda's... More...
1. Teirui Makura
Popular honor student little brother, Yuua, and his kind older brother, Seigo. One step ahead in the puberty department, Seigo tries to put a little distance between him and his cute little brother. However, the innocent little brother is to blame with his defenseless skinship. Finally, Seigo's lust consumes him and he can't endure anymore. Once Yuua accepted that idea, his desire to be attached to his brother grew stronger every day.

4. Choroize! Jigoku
A constant failure at job interviews thanks to his scary expression, Danda's employment agent sends him on a rather unusual assignment.

6. Natsu ni Shini Yuku Monogatari (Dangerous Symphony)
Rock and Homero live in a world, where all kinds of laws restrict people and you can get arrested for the simplest things. Naturally, being love with another man is frowned upon. Less... 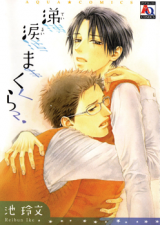 This... this is actually pretty good...!
by Reneesama
May 27th, 2017, 4:57am
Rating: 7.0  / 10.0
The first five chapters are like... pretty dumb, but that's not so bad, I mean... alright. But chapter 6 was THE THING. It was made to have a funny feeling, but there's such a deep meaning to it, I was amazed!
My guess is that these stories were made when the author was changing her writing style, that's why they feel not quite here, not quite there... but if you leave aside deep feelings (except for the last chapter, that shit is deep), you'll be able to enjoy it.
Was this comment useful?  Yes

Dissatisfied but...
by AelixRage
March 11th, 2015, 8:49am
Rating: 9.0  / 10.0
Well, the truth is, the stories were between ok and good and LOL. They weren't that much complicated but I felt a little bit dissatisfied, especially with the finger-biter. That particular story was 2 chapters long and it could've ended on a happier note. Bittersweet endings aren't really my thing, it's borderline depressing. Aside from that, the story about the brothers, well, I want moar smex 'cuz I like reading about incest stories (they're complicated, like me). Everything else was just funny. Oh and the art was pretty good, especially Rock from chapter 6.
Was this comment useful?  Yes

Overall I loved most of it, I'd recommend it to others.
Was this comment useful?  Yes

Outlandish
by Larawolfgirl
April 25th, 2013, 9:25pm
Rating: 6.0  / 10.0
Besides the first chapter I found them all outlandish. No, scratch that. The 2nd chapter was interesting more than outlandish. The first two chapters left me wanting more, especially the first because it seemed to just cut off. The werewolf chapter was just odd. The final chapter was so funny and outlandish though I was seriously laughing out loud. It was an okay read but very outlandish and the plots were pretty basic besides the 2nd which was intriguing but did not have the most fulfilling ending.
Was this comment useful?  Yes

random collection of oneshots
by Namiya
March 28th, 2013, 7:19am
Rating: 6.0  / 10.0
It was okay, very random selection, some good some bad.
I liked the first story a lot but sadly it ended rather soon and that was it.
I also liked the vampire oneshot, but again, I'd prefer it to be longer!
The rest were.... all over the place!
So weird and random! They're fantasy, sci-fi, comedy... I can't say I liked them very much so altogether, this book wasn't as good as many of Ike Reibun's other works for me, but if you are a true fan, or you enjoy some fantasy yaoi oneshots then give it a read!
Was this comment useful?  Yes

meh
by justasideshow
May 23rd, 2012, 8:40am
Rating: 6.0  / 10.0
Like @lifeincircuit said this collection had lots of different stuff going on.
But I just didn't really get the first two stories.. At the end of the first story, it felt that there was something missing and my guess would be that whatever it was, it got lost in translation ( I don't know, what was said on the school panel sounded somehow important to story... ). And the second one, I guess I`m not that into sci-fi.
The one that I most liked was Choroize Jigoku.

I don't even...
by varianthart
April 20th, 2012, 3:06pm
Rating: 8.0  / 10.0
Well this is a...diverse collection. Haha. There is a lot going on here. Some of these stories were very moody and sad, some were total crack. I enjoyed them all to varying degrees, though the first two stories were my favorite as they had the most meat(they were the least cracky).
Was this comment useful?  Yes

very good
by blu_papillon
April 10th, 2012, 3:18pm
Rating: 8.0  / 10.0
I actually really liked the brothers one, especially the sex scenes. This mangaka really knows how to make beautiful and sexy scenes. Very attractive. The second and third stories are about the same couple, a vampire type thing and the man who loves him. It was an interesting read, but still pretty weird. Although the ending wasn't happy, it was perhaps optimistic? Worth the read, however, because it's attractive to look at. The last story was really good. Very different and imaginative. I'd love to read more about that couple. They are so normal that it's refreshing. That was definitely my favorite. Look for the cute little 2 page extra for that couple.
Was this comment useful?  Yes