Login to add items to your list, keep track of your progress, and rate series!
Description
1) Hide and Seek
Takeru's sister complex is out of control, so when he sees her on a date with his rival Wanigawara he loses it! Fighting together in the street attracts police attention, and the two combatants are forced to hide in a cramped alley. But the atmosphere is strangely exciting...

2) Parallel Punch!!
Rising boxer Jin is being hit on by his sponsor, the director of a successful corporation, is wealth enough to knock Jin off his feet or does it take something else?

3) XLL Size
Nao keeps his older brother, Masaya, from going to a goukon in a very special way.

4) Youthful Burst
Takahashi t... More...
1) Hide and Seek
Takeru's sister complex is out of control, so when he sees her on a date with his rival Wanigawara he loses it! Fighting together in the street attracts police attention, and the two combatants are forced to hide in a cramped alley. But the atmosphere is strangely exciting...

2) Parallel Punch!!
Rising boxer Jin is being hit on by his sponsor, the director of a successful corporation, is wealth enough to knock Jin off his feet or does it take something else?

3) XLL Size
Nao keeps his older brother, Masaya, from going to a goukon in a very special way.

4) Youthful Burst
Takahashi thinks it's just a little teasing, but he isn't prepared for his classmate's reaction.

5) Black Sixth Class
Hisashi accidentally sees Ide-sempai and their university professor having sex. What will it take for him to not tell anyone about what he saw?

6) Deep Inside the Back of the Throat
What happens after Barou loses to Kosugi in a drunken arm wrestling match?

7) Winter Comes Around
Atsuhiro is living with his uncle and they get into an argument which leads to things.

8) Rumor About the Professor
There's a strange rumor going on about the economics Professor...

9) Loup-Garou Gokou
In a village full of werewolves, everyone is always searching for someone to spend the full moon with because that's when their sex drives are the strongest. Young Ichi is determined to wait for true love, but will he be able to resist the moon's pull, especially when he is pursued by Goroku?

Extra) Hide and Seek After
Wanigawara and Takeru are on a very special holiday. Less... 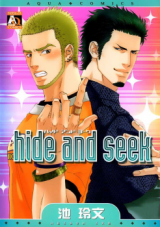 The stories themselves aren't anything to write home about but for relatively short one-shots they aren't bad when it comes to the plot either. I actually had a couple of favorites that I reread like chapter 5 and 7. And despite the very explicit art, there were parts that were nicely artsy in a mature way; no sparkles or flowers but a skillful use of art techniques that contributed nicely to the mood of the stories.

I'm very happy to see a book like this licensed in English as it definitely represents a different kind of yaoi manga. A bold experiment from Ike Reibun and It'll be intriguing to see if there will be more titles like this in the works.
Was this comment useful?  Yes

Danggggg!!!
by cutiewootie
March 30th, 2013, 7:38pm
Rating: 7.0  / 10.0
I think this is my first... uh... explicit yaoi. Most of the yaoi I read so far only showed silhouette of penises, but all the penises showed on this yaoi was pretty WOW. I loved it and I would recommend all heterosexual guys to stay away please!!!
Was this comment useful?  Yes

The art is amazing, and there are no shrimpy men in sight. But if you want an actual story, try Ike's Kanga na Spoon or Portrait in Blue instead.
Was this comment useful?  Yes

Great bara
by Pebble_
August 27th, 2012, 1:19am
Rating: N/A
It's bara, but the art is gorgeous anyway.
It's a must-read, for when you're tired of girly delicate ukes, or for when you want to see two REAL men going at it. XD
Loved it.
Was this comment useful?  Yes

Hottt
by Mochi__x
July 5th, 2012, 12:38pm
Rating: 9.0  / 10.0
I really liked Loup-Garou Gokou (ch9), it was very sexy and really cute too. Even though it was short it was obvious they had feelings for each other as neither of them wanted anyone else. That chapter was definitely the highlight of this collection for me! <3
The others were a bit hit and miss... The first story was quite funny (in a silly way but still enjoyable), and I liked the third one since the seme was the younger, prettier, and more perverted brother ^__^
So my rating is based on those chapters (1,3 & 9) I didn't particularly like any of the others so i'm not going to bother reviewing them ^^

well
by NightAir
June 15th, 2012, 6:17pm
Rating: N/A
I personally enjoyed it, and couldn't help but think it hilarious. It's not super serious, so don't take it as such. Plus, we don't get enough yaoi with "macho men", so definitely, I approve of this.

I liked this stories, found it funny:)
by Gattaca88
February 10th, 2012, 6:42pm
Rating: 8.0  / 10.0
Although I don't really like bara, I actually enjoyed this manga. There was not an actual plot in this short stores, but I overlooked that part since it's really not a serious manga. There were a lot of sex scenes, which can be fun for some...*cough*. I had quite a few laughs, especially in the first chapter. I really really enjoyed chapter 9. Talk about nosebleed for hot sexy werewolves

Overall, I had fun reading all of this stories and you might too.

3 pts just for the manliness
by City_Kitty
November 21st, 2010, 1:15am
Rating: 8.0  / 10.0
Ok, I admit it's PWP which is why I couldn't give it a ten. But! It has dudes with facial hair and muscles and stuff. Now, I know that sounds like a silly thing to get excited about but we all know that there is an overabundance of androgyny and a severe shortage of dudes in yaoi. So every time I come across facial hair and other evidence of manliness I give the mangaka extra points and this manga has manliness in spades. My rating breaks down thusly:

Art - 3 pts
Comedy - 1 pt
Manliness - 3pts
Plot - Ummm. If you liked Ike's art you should read Kanga na Spoon. It has the same great style and 2pt manliness (no facial hair or extra buffness but they still look like gay men) plus a really great plot.

In short, even if you don't read the speech bubbles you should at least look at the well drawn pictures of manly dudes getting it on