Login to add items to your list, keep track of your progress, and rate series!
Description
1 & 3) Love Skit
After his sister's death, high school student Aoto lives with his brother-in-law Takashi that he is secretly in love with. Takashi has to go on a business trip and asks his friend Masayuki to keep an eye on Aoto. Aoto doesn't know how to handle the flirty Masayuki.

2) I Only Care About You
Includes a side story about Aoto's friend, Akira.

Latest Release(s)
v.1 c.1-3 (end) by Dangerous Pleasure over 14 years ago
Search for all releases of this series 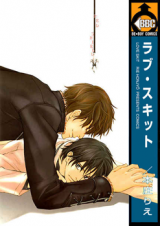 Not Too Bad but Nope
by landbound
August 21st, 2012, 7:19pm
Rating: N/A
I guess it's the first rule of BL and shoujo that every new man who comes into your life is either a rapist or molester you will eventually fall in love with, and will also come to enjoy the way they force themselves on you every time you let your guard down.

Unfortunately, that rule very much applies here. I love Honjou's stuff, but for the most part I found myself wishing that Aoto would have punched Masayuki a lot harder than he did and a lot more often.

I would probably be less inclined to feel this way if the plot had taken more time to develop, but instead Masayuki barges into Aoto's life and pretty much immediately shoves his tongue down the kids throat and his hands down his pants. It doesn't help that Masayuki keeps barging into Aoto's life and arranging situations where they're sure to be alone together, with no way for Aoto escape or make Masayuki listen when he says "stop".

I realize it's meant to be escapism and this all comes with the territory of genre BL manga, but for some reason it seriously bothers me that the manga sets up Masayuki to be this great guy, when all he's really doing is persistently and selfishly taking advantage of an emotionally vulnerable teenage boy.

The art is nice though, and the writing is solid even if I take issue with the storytelling, and there are some genuinely amusing moments. It might have worked better if the manga was longer, but as it is, everything happens entirely too quickly; however, if you don't share my aversions, you will probably find this a lot more worth reading than I did.

Akira's story, on the other hand, was very cute.

art is fine story is cute
by hxly
March 10th, 2012, 9:46am
Rating: N/A
like I said art is really good I like it.They are so handsome and I can feel their emotions.The story is fine too but I think It should be more longer

ahh I loved them very much I wanna see next part.I also like side characters.oo his hair style... kehekehe

I loved the characters. Masayuki is a hilarious and devoted Seme that pursues the hard-headed Aoto until the very end. I thought they were really cute together but maybe because of the length, I thought it happened all too quickly. Also, when Takashi realizes his feelings in the last chapter, it's a little too sudden, almost like the mangaka just wanted to add a little filler. Would've been great with a better closing chapter. The side story of Aoto's friend was very cute, I would've loved to see more of that couple

The art is fine and clean, nothing major but surely not lacking. The plot is pretty clique and not very original but I thought it all came together quite nicely.

Honjou-sensei's longer stories shine!
by MightyMaeve
June 14th, 2011, 1:09pm
Rating: 10.0  / 10.0
The structural suspense delivery was excellent, the developing changes in the main character's vision were suberb, and the emotional connection to his inner life was bang-on for me! And the art? Emotive!
Was this comment useful?  Yes

The Story is SUPERB
by MadarameCake
June 6th, 2011, 6:43pm
Rating: N/A
...Sigh~..I wish for more sequels of the story...About takashi-san finding a new love and the continuation of Akira's story from which he changed his hairstyle cause he looked more cool but the akira then was adorable..the only thing is..his hair..haha..but I did like it though....the story is soo great that I can't stop wanting for more. haha ....^___^
Was this comment useful?  Yes

Totally worth it!
by Itzel
February 18th, 2011, 11:17am
Rating: N/A
It's just so cute...the story line I mean...I like when the main character has an unrequired love but slowly get over it with a new lover!...(sorry if that was a spoiler)...If you are thinking about reading it...DO IT!...you won't regret it...
Was this comment useful?  Yes

Enjoyable!
by AislinCeivun
January 29th, 2011, 1:43pm
Rating: N/A
I swear the best part for me was
Spoiler (highlight to view)
when Takashi-san stepped into the room and there met with his naked friend coming straight out of his brother-in-law's bed... X'D I generally love "coming out of closet" scenes and this one was one of the best I've read so far. Why? Because the first thing Takashi does is asking Masayuki to keep quiet so they don't wake up the boy and orders him to leave the room to talk. An adult's reaction! And then in the next few pages we can see him arguing with a bruised Masayuki - so he actually punched the guy's face! Yay, that's so great. I know Masayuki loves Aoto dearly but Takashi's damn right for giving him such a little punishment for seducing the cute boy. :P
I like Honjou-sensei's stories and this is no exception. Aoto is a cute yet strong uke, Masayuki... well, what's there not to love about him?... and Takashi is a serious, reliable big brother-like character. Akira's side story was nice, too. I loved the last extra page where we can see Akira with his natural hair-style. ^__^ An enjoyable peace of work so don't miss it.

Masayuki <3
by gloomy_gloo
January 10th, 2010, 3:41am
Rating: 8.5  / 10.0
I like this manga particularly because of Masayuki's character: he's funny, bubbly, and acts immature even though he's actually someone who has been through a lot and is very serious about Aoto. It's amusing to see how he tries to grab hold of Aoto's heart even though Aoto always pushes him away.

It would've been even more interesting, IMO, if the manga had included more of Takashi-san's internal struggle over his feelings for Aoto, which perhaps could've resulted in a very messy love triangle XD

The one-shot about Aoto's delinquent friend, Akira, is also super adorable and a story that I wouldn't mind seeing more of.

the art is gorgeous
by xono
May 10th, 2009, 8:05pm
Rating: N/A
The story is OK. Almost anybody will like it. What I really like here is the gorgeous art, even the h-scene are hot. Well drawn. The main uke looks adorable. It's my first time to say that to an uke.
Was this comment useful?  Yes

Love Skit
by angelkurisutin
September 2nd, 2008, 7:58pm
Rating: 9.0  / 10.0
There was a really great mix of humor and angst in this manga. ^_^ I loved Masayuki and Aoto together, even if there was a fourteen(!) year age difference. XD You hardly know because Masayuki is always acting like a kid. But I really love how he finally gives Aoto somebody to lean on. I especially loved the scene where Aoto calls him for the first time- it just shows how alone and suffering he really is, and how Masayuki might be a fix to all that. But then to lighten the seriousness a bit, there's Akira. >< I love Akira... but his HAIR! I can never get over that... The story with him was cute, but I kept getting sidetracked thinking 'the hair! the hair!', and I kept wondering how it was possible that the two greatest fighters from their respective schools could act so... soft. Especially Akira. But, oh well. I love one of the afterward pages because it shows Akira after he gets out of the shower, and he actually looks cute. Part of me wishes that was his design in the manga, but then again, his hairstyle says something important about the kind of character he is. But anyways... yes. Definitely read for Masayuki and Aoto. Love that couple.
Was this comment useful?  Yes