Login to add items to your list, keep track of your progress, and rate series!
Description
Shin Youngwoo (a.k.a. Grid), an unlucky man in life and a low-level player in the popular VR game “Satisfy,” finds a powerful item that earns him a rare legendary class title: “Pagma’s Successor.” He’s now a skilled blacksmith who can forge unique weapons and equip the game’s most powerful gear. Grid resolves to use his new abilities to achieve fame and fortune, but as his very existence begins to stir up trouble in Satisfy, he realizes that life as a legend may be more than he bargained for….

Official Translation:
English, Indonesian, Thai, Jap... More...
Shin Youngwoo (a.k.a. Grid), an unlucky man in life and a low-level player in the popular VR game “Satisfy,” finds a powerful item that earns him a rare legendary class title: “Pagma’s Successor.” He’s now a skilled blacksmith who can forge unique weapons and equip the game’s most powerful gear. Grid resolves to use his new abilities to achieve fame and fortune, but as his very existence begins to stir up trouble in Satisfy, he realizes that life as a legend may be more than he bargained for…. 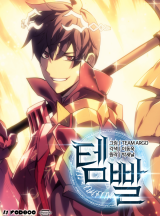 Note: You must be logged in to update information on this page.
Forum Posts Click to view the forum
Reaper vs Leviatan
over 2 years ago

Exceptional
by Arthur Farron
June 25th, 2022, 7:11am
Rating: N/A
A load of comments from people so used to reading garbage like mha, csm, tokyo ghoul and kimetsu amongst others. The reviews are rather comical to read and evokes pity imagining which shallow reader might be writing them.
The story in its initial phase, as similar works tell, quite slow and uninspired. But from the quarter point it starts picking up pace gradually. As oversaturated as the genre might seem in it's plot pattern, what is the main focus of this story is in it's entirety, all the characters so masterfully portrayed and developed over time. As the reader progresses through each chapter, the characters grow right alongside them gradually. Not too fast, yet not too slow either: at just the right pace. Shinwoo and Greed's growth as a human is definitely the most exciting, slowly rubbing the divide between his life's fiction and reality. It is not that he grows alone, but rather nurtures and raises everyone around him, be it friend or foe. Through Greed's eyes, the initial clear cut categorisation in Satisfy's world, between the players themselves and the NPCs too slowly starts to blur.
Honestly, it'd be easy to go on and on about how despite being cut from the same cloth, this piece of work strays the furthest and goes ways toward making a compelling work of fantastic fiction. And if readers truly wish to dive deepest into why and how Overgeared is so good, then reading the webnovel is definitely a must.
Was this comment useful?  Yes

Unimpressive.
by MondSemmel
August 12th, 2021, 9:08am
Rating: 7.0  / 10.0
This VRMMO-style story has a few neat ideas - specifically, quests don't just involve NPCs, but usually pit players against one another (i.e. if civilians fight against corrupt authorities, there will be players on either side of the conflict). And sufficiently difficult quests can ostensibly result in the death of the quest-giving NPC and all future quests associated with them.

However, besides these few innovations, the rest of the story is rather generic. The art isn't good enough, and in particular facial expressions are way too bland for what should be disturbing situations. The protagonist gains an ability which is transparently overpowered from the beginning, rather than having to make ingenious use of his skills to become strong. The plot progression is unexceptional.

Even worse, there's a level system, which quickly becomes pointless when the protagonist turns out to be ridiculously overpowered for their level. And idiots attack the protagonist's team for idiotic reasons, get defeated, and then vow revenge. (Yeah, I sure have never seen either of those scenarios before...)

Ultimately, this story can't overcome its generic origins.
Was this comment useful?  Yes

South Park
by Helbrassen
June 9th, 2021, 2:32am
Rating: 3.0  / 10.0
You know that one episode from south park where the gang plays World Of Warcraft? Its an episode making fun of people who take the game to seriously, the way the characters act in that episode is the way the characters act in this manga, its as if the game is super important on par with real life and as an Old School MMO player with 15 years on my belt i just want to say... it's kinda cringe. It's clear when I read this manga that the writer has a very limited knowledge of how MMOs work. Anyone who has played MMOs for any lengthy period would not be able to take the story seriously and would find themselves cringing and annoyed while reading it.

DEF RECOMENDED
by Boomaye
March 8th, 2021, 7:29am
Rating: N/A
Just be aware that the initial chapters may not be that good
Was this comment useful?  Yes

It's not a solid story
by yuno19
December 27th, 2020, 4:26am
Rating: 5.0  / 10.0
Overgeared tells story of game addict who dreamed to get rich through a game he play. It never worked out. Until one day, he acquired a really special class, rarer than entire player base have. And, after understanding the advantage of said class, he began to make obscene amount money.

Oh, the plot progression is not that straightforward. There are times when he makes a fool of himself. It makes the story develop naturally. The good thing is, they're packaged with ample humor. Enjoyability is very likely.

Unfortunate to me, those humor doesn't distract me from bad points of this webtoon. I can mention two.

(1) Author doesn't really have idea on how mmorpg is made, marketed, and maintained. There's no designer, programmer, or community manager. If issues crop up, it goes straight to the higher ups. Just think of this, there are numerous times when the higher ups in the game maker company make a fuss over who unlocked aforementioned special class. They know because a game admin (lol) gave them a phone call. They even hold meetings about one other player quest progression. That's silly.

(2) The money main character made is obscene. Selling one highest rarity item enabled him buying the most luxurious car around. No streaming contract, no brand partnership, no profiteering. Just a sale of a game item. That's silly.

I think this is the disease of every game novel (in this case, webtoon) in existence. Authors made their game as the most important thing in the world. A single game would never. This unbelievable setting makes readers who care about setting (in this case, world building) unable to take it seriously. I, personally, can't even enjoy it. If I don't have an old friend who want me to read it, I would stop reading on chapter 1.

(Actually, I did know about overgeared before my friend mentioned it to me. And I did stopped after the first chapter.)

But if you're a kind of reader who can ignore its setting, I think you can enjoy this webtoon. Just be wary, first half of currently available chapter is utterly boring. Next half is so so.