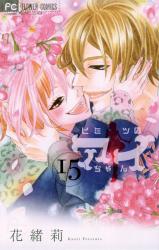 Not what I expected
by tipz
October 21st, 2014, 11:12pm
Rating: 5.0  / 10.0
I like a good smut manga.. This is no such thing. It's one second of smut the rest a normal high school shoujo so far. Art is all over but awesome that way!
Spoiler (mouse over to view)
it starts with a tomboy girl and a guy being basketball rivals for basketball and for the girls attention at school. She then has to help her brother at his maid cafe that requires her to dress as one too. He then shows up with some team members at the cafe and asks her on a date. Dressed in her disguise she goes with the intention to make her fall for her and hurt him in the end so she could get back at him for all the times she keeps losing to him. But they end up In a hotel where he plays with her and they almost have sex and she is totally taken by him. Frustrated she then reveals her true self to him on their next date and he admits he always knew. She thinks she is played again and runs from him. He chases her and tells her he wasn't playing with her, but she tells him "she" was. So after that drama he somehow made up with her and they start to date. The rest is about these twins that try to break them up. Her keeping on dressing different so that people don't find out at school and them kissing all over the place in "erotic" ways. While he continues to try to get close to her. The last chapter so far they are at a hotel while On a trip with the group supposedly about to have sex. They make out she gets scared.. He feels stupid now...

Totally Head Over Heels on this Manga (≧∇≦)/
by xninaxhangx
April 5th, 2014, 2:07am
Rating: 10.0  / 10.0
i totally love this manga, it makes me so excited when i read it. it's so cute and adorable, makes me feel like it's a real story. i totally love the story line, characters, and drawing. love everything about it, i really want it to continue, it should be an anime after the manga is over. there could be a tv drama of it as well. it would be perfect xD

Spoiler (mouse over to view)
I totally love how Aiko is Reo’s rival in basketball, seeing she loves to challenge anyone who’s better than her. She’s so cool and cute. When she started her job in the maid café, I think she’s adorable in her maid outfit and should let her hair grow out; she’s beautiful no matter how I see her. even if she’s a tomboy. It’s pretty funny that Aiko tried to make a fool out of Reo, but I never expected Reo to find out so quickly. I though he wouldn’t notice since she’s a tomboy. But seeing she’s his rival I can understand how he could tell it’s her.
Out of all the chapters, the end of chapter three was my favorite part, because he told her the truth about everything and tried to fix everything up or else Reo would have lose her. But I can’t believe Aiko actually fell in love with Reo that was a total surprise (≧∇≦)/

I really love it so much that it really makes be wanna draw my own manga. KAORI is one of my inspirational authors

The Art Ruined Everything
by FlameKeeper
March 14th, 2014, 9:31am
Rating: 5.0  / 10.0
Honestly, only if the art was better....it could have been good. I don't know about being annoying or whatever. Its just that the art was horrible to me. The expressions they were giving at times....I was like ~_~ So I say, Art ruined it....
Was this comment useful?  Yes

Good at first
by ScytheMaster14
June 20th, 2013, 2:54pm
Rating: 6.0  / 10.0
I just wanna say first things first that I love Aiko's hair, you NEVER see hair like that for ANY protagonist and its so unique and i love it to death! x3 But anyway, I really liked this manga in the beginning. For the first volume, it was great! A good plot line, good characters etc.. It just started to go downhill very quickly when the love rivals showed up
Spoiler (mouse over to view)
they had this whole incest thing going on and the girl was just so incredibly whiny and bitchy. She complains about how she gets bullied all the time, but with the way she acts she deserves it in my opinion, she provokes people and when they react to it, she gets mad and tries to steal their boyfriend. Just what planet were you raised on to think that is a solution to any problem? And her brother just goes along with it like its a normal thing, he even HELPS her. These characters were made to be hated i know but come on!
I really wanted to like this series, but it was obvious the author had planned for it to be a one volume manga and when it got extended, she threw in the rivals because she wasn't sure how to continue, and it really saddens me how she's kept them throughout the proceeding volumes without lessening their presence. Hopefully it will change in future volumes but right now its just plain frustrating how they always appear EVERYWHERE its like a harem how they prevent any development between the main couple. Please update soon!
Was this comment useful?  Yes

....
by kazumi_matsumoto
July 16th, 2012, 6:50pm
Rating: N/A
I LOVED IT! & I LOVE REO! He's like my dream man. LOL & The story is very adorable but seems like I've seen a lot of plots like this which can get me bored easily but I've seen so much manga that I don't remember but I am waiting for new chapters to come out soon so I can see the end of this manga cause I think the couple will go through a lot of bad stuff before they get married or have sex or whatever.
Was this comment useful?  Yes

Refreshing...
by UsoSora
April 9th, 2012, 7:29am
Rating: 10.0  / 10.0
Now, after thoroughly searching for something not so copy/paste and a little bit different but still in the domain of a classical shoujo story, I bumped into this one and I must say that it is really a refreshing story to begin with. It's likable, moving at the right pace and funny. I feel good while reading it...now, if only I weren't so impatient about the continuation, I mean translated chapters, it would be good, like this I have to wait and I don't like it when I have to read something piece by piece, but, oh, well, I finished many stories like that so far so I believe I won't lose interest in this manga also

meh
by lalalarry
April 2nd, 2012, 1:43am
Rating: 5.0  / 10.0
i thought this might be good but really, the heroine is really ditzy and naive.
couldnt get past a couple chapters
i thought it might be more original but after the first couple chapters, it quickly turned to typical shojo
and i agree with enaikelt about her spoiler

" and then it turned like => "Really?? That's it?". But the art was good and I must confess that this kind of story attracts me, but then the obstacle was like almost every shoujo and after that it started to lose its originality. I really liked it and I'll probably continue reading when more comes out, but if you're a perv like me, get your hopes down, because it's not a real smut, is a shoujo with some little heavier ecchi.
Was this comment useful?  Yes

Disappointed
by MaZzAx
December 13th, 2011, 2:34am
Rating: N/A
Nooooooooooooooooo. Why did the mangaka have to ruin it?!
I started reading it thinking mwuhahaha this is gonna be great, he has no idea who she really is but then BAM, turns out he knew all along. Excuse me but just where is the fun in that?
So stupid.
DITCHED
Was this comment useful?  Yes

The character development is non-existent, and both the main characters are immature. To top it off, the smut totally sucks. Which is why I don't even understand shoujo smut––it completely lacks the smut factor. That said, there are, as a previous reviewer has said, good shoujo smut and bad shoujo smut, though I've only seen one or two of the former but hundreds of the latter.

But for a more substantial review, I'll try to be more objective. The balance in this piece is surprisingly good. Because both of the main characters are idiots, the girl does not seem as idiotic as the stereotypical shoujo heroine. The main guy character, on the other hand, fails to hold up the "perfect guy" shoujo standard, but I don't feel that detracts from the story. If there is a story.

Frankly, the only reason why this thing progressed from a oneshot (when it shouldn't have) is because of the art. Right now, it's easy to see that either the manga-ka has no originality (except for the art perhaps), or she's adding in random shoujo plot shticks as she goes along. Even the jokes are overused, and aren't that funny.

So... yeah. I would skip this one, even if you're a hard-core shoujo fan. I wouldn't mind it if were only one volume, but any more than that is ridiculous. It's not even bad enough for it to be funny, only irritating.