Login to add items to your list, keep track of your progress, and rate series!
Description
From ShoujoMagic:

Hisako is saved by a beautiful wolf that turns into an even more beautiful man… but can a relationship like this work!? 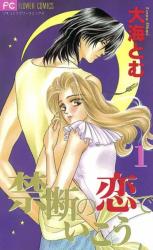 Note: You must be logged in to update information on this page.
Forum Posts Click to view the forum
whats that chapter?
over 9 years ago

Deliciously bad
by MewLovesManga
September 2nd, 2017, 1:25pm
Rating: 4.5  / 10.0
You have mysticism, bestiality, lots of sex scenes, a half-baked plot that drags on and as the cherry on top:
Spoiler (mouse over to view)
the MC reincarnates as a TREE. wow
It's a mind numbing series that I would only recommend to someone really bored, willing to appreciate the story as an example of unintentional absurd comedy.
Was this comment useful?  Yes

Not worth it
by tipz
December 15th, 2014, 2:18am
Rating: 1.0  / 10.0
The only reason I finished reading this manga was because I read the other ones. In truth it was a pain to have to yet and finish it.. It was filled with 40 chapters of stupid stories surrounding a odd couple that have sex a lot . The only part I liked was the ending two chapters honestly. Artistry was okay for that time.
Spoiler (mouse over to view)
comes up with them living together per usual. And him wanting to jump her bones. They go through pretty much 40 chapters of them talking about separating and not separating and needing to stay forever together. Blah blah blah.. Big stories to remember I guess.. A new guy from Germany was introduced. He screwed his sister which he thought didn't love him and she committed suicide infront of him.. Anyway he ends up being obsessed with Yato. Tried to steal him and rape Hisako.. But Yato becomes human and saves her.. Later on he realizes that his sister loved him too and all is well?!... Shop owner Inherites a castle in Germany.. A man that fell in love with Yato 100 years ago possesses a woman and tries to trap Yato and kill Hisako... That's when she finds out Yato's past and that he is from Germany.. They end up saving each other and the lady got off okay.. The owner Inherites a castle in Germany that ends up being in Yato's hometown.. They go along and Yato meets his real son there that can also turn human... They gets sent a stuffed wolf for a house gift... It needed up being Yato's wife that got hinted and killed a couple hundred years before.. Yato goes crazy and runs away...but Yato's wolf wife ghost gets hisako's help to save him from himself and she does.. They eventually say goodbye to Yato's son and go back to Japan. Yato end up having a duplicate made of him made out of granite.. It ended up having power from the sun/ moon? It creates havoc around town acting as Yato and then attacks Hisako with the owners help. Hisako. Hisako is taken hostage, but shortly after Yato comes and the owner doesn't seem to be a bad guy. The fake Yato that wants to erase the real Yato ends up losing and disappears. Then hisako is a tree spirit that can become a physical spirit (like the one they met before) but she doesnt know it yet.
Side story: owner can actually see spirits and Hisako is surrounded by them all the time!
Was this comment useful?  Yes

Awwww
by aiish
September 4th, 2013, 12:16am
Rating: 8.5  / 10.0
So sweet. Took me five days to read, with me being busy and all. But I loved it. Reminds me of another romance where the girl had to leave her immortal lover. Oh yeah Hana To Akuma... So sad!!! Gah!!! Those always make me tear up! But you know what they should have done, with all the mystical creatures and all, they should've searched for a vampire to turn her immortal so they can stay together haha.
But on a serious note this was a great read. Idk what others be thinking but Yato is hot! Well he gets hotter. And the storyline gets better too throughout the manga. The only thing that I didn't like was the sudden ending. It didn't feel like a real ending. I think they should've drawn more or show a glimpse of how she grew old and then end. But the next thing I knew the next page was her grave scene. O.o I did tear up though. I tend to get emotionally attach to mangas now lol. Welps, I loved it 9/10. Ok now that I'm done reading this my life is bland.
Was this comment useful?  Yes

one of a kind
by shanden123
May 2nd, 2013, 8:26pm
Rating: N/A
okay readin all prequals to the very end and squeals i came to love this manga. it was entertaining. you dont get bored and i just kept reading and readin . it pulls u in . awesome art work.. i like the ending it was reasuring that they were always going to be together im glad it wasnt one of thes ama cry ending.. i really wish they have another one ... so yea go read it.no regetion
Was this comment useful?  Yes

Missing chapter?
by astromath
October 5th, 2012, 9:43pm
Rating: N/A
There seems to be a missing chapter. See chapter 29 page 4 table of contents. The extra chapter "Let's Go on a Forbidden Trip" appears to either be missing or unscanlated. If it is unscanlated then the manga cannot be considered completely scanlated.
Was this comment useful?  Yes

smiley face
by born2shop
March 30th, 2012, 5:44pm
Rating: 8.0  / 10.0
SO it's much different than Midnight Secretary (which I absolutely love) but I like it. The story and the characters felt light and airy. And I loved how they loved so passionately. Made me very jealous lol At first I wasn't so keen on the art.. but I grew to like it. After all it's from the mangaka of Midnight Secretary. That's all I needed lol

I loved how in the beginning Yato seemed so fierce! but by the end his expressions were so soft and lovely.. Hisako was something of a ditz, but I don't think that she was stupid. The ending for me was bitter sweet. And I did get a little misty eyed. I must admit, but I held it in lol I wish they could have found some other way to be together.. that would've been happier.

But the story was quite lovely. I did enjoy it :-)

I don't know about some of you, but:
Spoiler (mouse over to view)
There was one scene where the main girl was having "problems" that her werewolf boyfriend wanted to do her while he was still in wolf-form. They don't end up actually doing anything, of course, but it's touched upon quite often and get preeeetty darn close, if I recall correctly. These scenes were so darn uncomfortable that I had to skip to the next chapter when they arose. The imagery was too much.
But hey, if you don't have a problem with potential zoophilia, give it a try! In that sense it stands out from the crowd.
Was this comment useful?  Yes

Honestly... this isn't the type of manga I'd recommend. I'm not a sucker for those cliche dramas, or corny lines and stuff... I don't usually read smut either, they tend to make the plot shallower and focus on sex, and in general, too clingy to their lovers for my taste = =. Well... I dunno, there just was somewhere I didn't quite like about this. Never to the point where I'm annoyed or hating it though.

I never quite got to the point where I loved the story, but for a smut this was unexpectedly good. I'm sure I would've given it at least an 8 if it weren't for the ending... It's not the ending ending that's bad, it's the story they chose = =. ARG! I already mentioned this, but pretty much ruined my impressions on the characters.
I also do realize this is a sequel, but I would have loved if they at least explained a lil more about the relationships... I never quite understood how the characters relate. Which in turn, makes the romance and other stuff more shallow and sex-drived.

The art is amazing. Although wolves are one of those better drawn manga animals, it's still pretty darn amazing. In general, manga animals usually aren't drawn quite as well, this is especially with horses I find. I find it incredible how detailed and real the wolves actually looks. Although I don't draw canines much, at first glance the anatomy doesn't seem to too far off. The poses are natural and much varied, instead your usual just standing and walking.
Well... other than that, the humans... especially the females, they look way too masculine... I won't go as far as saying they suck, but like I said, they do look weird at times. Other times though, the guys are hot and the girls are passable.

All in all, it's not a bad manga, but I probably won't recommend it to anyone else. I didn't have too high expectations for this one, and I fully got what I paid my time for back. Worth the read.
Was this comment useful?  Yes

omg !
by slykid
July 8th, 2011, 3:13pm
Rating: N/A
Seriously this is the worst introduction I have ever seen in a manga , I thought this would be great because of the reviews but Omg I'm 23pages in and I'm seriously finding it hard to read that yet alone go on , the manga isn't looking promising the art sucks and for me its a no no.
Was this comment useful?  Yes