Note: Kodansha has the Digital Volumes while Azuki and INKR will have the individual Chapters Less... 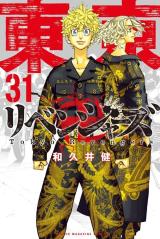 Note: You must be logged in to update information on this page.
Forum Posts Click to view the forum
Tokyo Revengers Manga Sets Sights on Final Arc Climax
3 months ago

Journey
by MLGSwag
November 16th, 2022, 12:24pm
Rating: 10.0  / 10.0
Workers what a journey, I get that people dislike the whiny Mc, but if you were in his perspective, most people would just whine as much, not out loud but in their head, regardless I really liked this manga
Was this comment useful?  Yes

After the first chapters and how resilet the MC proves to be over and over again, you'd expect he'd learn to fight after his n-th death, but no he's still a pushover and just gets more stupid as random teens that look like battle hardened veterans are introduced to the story.

Even if it turning the last 3 volumes into a yaoi manga and having Mickey and the MC marry would be a more dignified ending. Nothing relevant has happened for ages, after the first ark it was already pretty reasonable that he wasn't the only timetraveler saying it explicitly doesn't change the plot at all.
Was this comment useful?  Yes

I rated it high because of Mikey
by EroBakaSenpai
November 23rd, 2021, 4:29am
Rating: N/A
I only watched the anime and I don't really like the protagonist. He wanted to be strong but doesn't even train himself. He's a pathetic loser but I still kept watching because of Mikey and the other characters. Throughout the anime, I only imagined that Mikey is the protagonist and not Takemichi.
Was this comment useful?  Yes

God why should it be like that?
by toprak
July 21st, 2021, 8:00am
Rating: N/A
It was really good at the beginning, slowly it turned itself out generic.
Was this comment useful?  Yes

Starts great but quickly runs out of ideas
by makhan
June 22nd, 2021, 2:40pm
Rating: 6.0  / 10.0
Started great, but after the first ~50 chapters it doesn't really offer anything new, just a rehash of the same ideas and taking "the power of friendship" to the next level. It's still an enjoyable read, but it could have been much more.
Was this comment useful?  Yes

I agree with @Gottesurteil's comment
by Yuzuhiro
May 21st, 2021, 4:42pm
Rating: N/A
Spoiler (mouse over to view)
This is great for the first time and so on but it starts not good when you find a good path, when everything is perfectly happy, the author seems very out of ideas,he looks for a trigger to delay this happiness and makes up the story "again".Come on !! Close this manga already, it's not good to add triggers that shouldn't be! Give the ending decision for this manga! Too many triggers destroy this.I gave it a starting 8 and so on, to be honest for a new trigger in the chapters 200± it was pretty foul,4 for that!

Started off great, but then slooooowly slid into generic-ness, and finally into 'this should be dead'
by Gottesurteil
March 17th, 2021, 3:32pm
Rating: 6.0  / 10.0
Spoiler (mouse over to view)
As the title states, this started off pretty damn good, one of the best shounen. Then it began to follow what I call the 'Bleach syndrome'. As the story arcs continued, they got more and more repetitive, while offering fewer and fewer hints towards the overall resolution, but still good. Finally we got to the more recent stuff (lets arbitrarily say around 150?) and it is now a bore to read.

What should be a triumphant emotional climax (because it's been building for SO LONG) is now drawn out and boring. What should've taken 2 chapters (not a fight scene lol) is now 14. Then finally, when we all thought the story was legit over, it's... still going. WTF. It's on the level of Death Note trying to salvage the story after the main 'antagonist' L (err, opponent for the protagonist?) died. Or how Bleach tried to recapture the spark after Aizen was defeated and turned to utter sh*t. There literally were a bunch of epilogue chapters showing the standard '10 years later' which is pretty easy due to the time-travel feature of the manga. But it. Keeps. On. Going.

Lord of the Rings epilogue has nothing on this, if this is truly the end. It's either the most painfully drawn out epilogue, or the worst segue into another arc in a series that should've been done already. This is as of c198. At this point the author is just milking it.

I truly loved this back in the day, but ... I just don't care anymore. The ride was great, until I suddenly realized that it hadn't been great for a long time, and had been slowly slipping a little bit at a time, unnoticeably. It needs to end before it gets any worse.
Was this comment useful?  Yes

One trick pony and not even that
by calh
September 27th, 2020, 1:24am
Rating: N/A
I have great tolerance for the friendship and willpower shounen tropes but this series offers nothing else. Here’s a manga when a 26 year old acts like he was 12 and 15 year old kids act like veteran mobsters.
After 170 chapters all the hero can do is to offer his face to the bad guys to beat up until his friends get rage powered and the bad guys get cold feet. Never mind that the bad guys are extremely calculating types who have no problem killing bystanders, they invariably become unnerved when a weak guy from their enemy gang eats too many punches.
The time travel is a complete red herring since the hero can only use that one strategy no matter what he discovers in the future. What is the point of knowing the future if you can only do one thing regardless of what you learn?
The series is passable for the first few volumes but you won’t miss anything by stopping after the hero becomes a gang officer.
Was this comment useful?  Yes