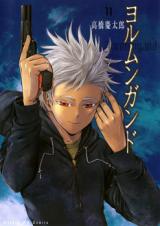 But thinking about it a little more, there's nothing mediocre about this series. It's a lot of bad.

Jormungand is something I would recommend to anyone who likes action series with absolutely no flavor.
Was this comment useful?  Yes

I wish there were more.
by Pebble_
March 16th, 2012, 10:29pm
Rating: N/A
The story has a little 'Black lagoon' feeling to it, which is a good thing, and there seems to be a real plot ahead. SO, the only problem is that there is so little scanlated.
Looking forward to next releases.
Was this comment useful?  Yes

Really Good
by PepperPia
March 6th, 2011, 10:49am
Rating: N/A
I love all the characters and the way they don't gloss it or try and make everyone good. Plus I love Koko I think she's such a good chacacter. The art is also really good and the plot too. It's similar to Black Lagoon but better and less boring.
Was this comment useful?  Yes

Just wondering
by appropriatelylao
February 6th, 2011, 8:01am
Rating: N/A
It says there is a romantic subplot in this, and i am just wondering if somthing develops later or if it is just a miscatorgarizing (invented word). Since it would probably be a spoiler then u can just message me, or i will be starting a thread too.
Was this comment useful?  Yes

Excellent manga. Recommend it for anyone who enjoyed the gritty black lagoon. It deals with a cast that are typically antagonists of a series (murderers, arms dealers ect) and so far the mangaka is doing a great job of making them intriguing. The story is more episodal than one big arc at the moment,so it's hard to judge. The art matches the subject matter and the character designs are great.

Read it if you want an action manga with a few quirks and an interesting point of view.
Was this comment useful?  Yes

First Impression
by basejump
October 8th, 2007, 2:13pm
Rating: N/A
This is the first chapter so its like a fresh new unique start. I really need to read more of this very interesting manga. The first chapter is recommended.
Its in my favs

Did i already say i need the next ch.? xD

PS: Will edit when progresses.
Was this comment useful?  Yes