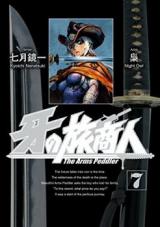 bad plot good art
by SpaceView
December 10th, 2014, 11:30am
Rating: N/A
Well.. first of all the title of the manga, can be changed to almost anything, really...
It's almost anything els then a arms dealer manga, they fight vampires,weird monsters, ghouls, and more undead.
Art 7/10 good art, it wont be hard to know what happens in it, and it's nice to look at.
Plot 2/10 the boy MC is so young still he does these things that no freaking human would do at their age(ofcourse it's a fantasy manga) however they go with him being a normal human being. his state of mind of what's happening and what he should do is so far off, you'll wonder if he's been a child soldier his entire life.
The plot is almost invisible, he want's revange but they lead this manga sooo freaking long away from the goal, you don't know actulley what the heck they are, my guess Ghost busters.

Characters 3/10 You have this whiney crack girly character, a boy stupid as any other Japanese MC who runs head first without fear or even thinking (Like any normal person would) to these event's, where your like, WHY ISN*T HE DYING!
And the female badass, who i think they try to invision (berserk GUTS) with a big sword, and killing monsters atleast 3-4 her size.

this Work readble if you have nothing to do, or nothing to read,
if you are new to the manga world pass this on. there are lots of better fishes in the sea.
Was this comment useful?  Yes

So far so good
by andy_f
January 20th, 2014, 4:41pm
Rating: 6.0  / 10.0
I read up to chapter 47 and it seems quite interesting so far, stories about revenge and the path that it leads them. I want to keep reading on to see what happens but throughout the book it consistantly hints at a tragic ending which kinda puts me off it abit. Its not like i need it to be a happy ending since it doesnt really seem the type but its just like its spoiling the story itself
Was this comment useful?  Yes

Great art, shitty plot and characters
by kirika
July 11th, 2013, 2:04pm
Rating: 1.0  / 10.0
It's a stupid series with good art IMO. The artwork is good but the plot is rather schematic and naive. The only reason it's in seinen category is because there is occasional nudity, brutality (that involves occasional blood gushes and flying limbs) and some sexual content. But plot-wise and character-wise it's worse than any seinen I know (excluding Ubel Blatt). The kid is annoying from the start, something like Raki from Claymore but worse since he has almost as big role as Garami. And he's constantly in deep shit in one second and miraculously rescued in the next.
Spoiler (mouse over to view)
First, from all the people that were in the caravan only he wasn't killed. Then he was rescued from starvation by Garami. Then he ended up as a slave and had a broken bottle *by accident* near him and he was fast enough to use it. Then he was sent to a violent prisoner who turned out to be a child lover and he just happened to have a healing ointment (yeah, they've managed to put him into chains but couldn't search him? Or they did and they allowed him to have something like that even though he was supposed to become pig food? It would be better if he wasn't in full health in that case, wouldn't you think?). Then one of the blocks was loose enough to take it out and the hole big enough for him to get through.
But the win (in a bad way) of this volume for me was for him *accidentally* fall into a sewer/underground passage that led directly to super valuable princess' room . Also the kid's family has just been massacred and he's as cheerful as a kid in Disneyland. Basically the kid is a retard. He went back to a prison thinking no guard would be there? And how would he let demi-human (Immortal Zodd cheap rip-off) out? But the stupidest thing was that the lion could get out himself, lol. This manga is almost as stupid as Ubel Blatt. Also this lion could wipe out in second the army of zombies which could wipe out 20 armed men easily... WTF? How did he and 5 of his comrades get captured if they were worth like 1000 normal soldiers?
If that's seinen than PLUTO is shounen.

But anyway, if you liked it you should really check Desert Punk out. Desert Punk is a real seinen where characters feel real (i.e. they're way better constructed and their actions are convincing unlike in AP) and the plot is better thought out (comparing only first volumes of course). There's also Trigun (which also is in a post-apocalyptic setting) which is another great manga, much better than anime and also much better than Arms Peddler. And Shingeki no Kyojin which is also much better (although IMO worse than Trigun or Desert Punk by a class at least).

It's Transforming!
by McCasper
November 13th, 2011, 3:18am
Rating: 6.0  / 10.0
The more I read this series, the more shounen it becomes. It goes from a boy witnessing the slaughter of his family and choosing to live on as a slave to literally
Spoiler (mouse over to view)
rescuing a princess, hiring his owner as a bodyguard and promising to deliver family heirlooms of a proud warrior-race guy
in 20-something chapters. Still, this manga is intriguing, Garami is sexy and also intriguing, the art is awesome, and I want to see where the story goes. Good read.
Was this comment useful?  Yes

interesting read
by nacht
October 3rd, 2011, 9:11am
Rating: N/A
dunno about other harsher, grittier series, but I sure like this one. It put a definite kick on reality (even though you done things on good intention, it doesn't always give off a good result in the end. Sometimes it bring trouble, which escalates in the end, and so on......)

The only problem that I'm having is, because of such harsh consequences from real life like that, sometimes I got thrown when a fantasy/mythical being shows up (needs to readjust the 'oh yeah, this is in fantasy setting after all' meter - but maybe it's just me that's weird like that). but overall really nice series, looking forward for it for next development
Was this comment useful?  Yes

fake character development...
by panos
September 27th, 2011, 5:27pm
Rating: 6.0  / 10.0
I have read until chapter 14 and although the setting is interesting kinda berserk like, the behavior and actions of the boy are more similar like a character of shounen rather a seinen.Basically he is a slave with a huge debt and not even once he has tried to escape, especially after what Garami did to him in the prison arc.And his reaction and grudge after meeting again covered only one bloody panel, nothing more.A good story is many times made of it's characters.Unfortunately, in this particular one they behave like morons.

Very interesting locales and atmosphere
by renecop545
August 8th, 2011, 5:18pm
Rating: 9.0  / 10.0
Pretty good series. It's still in the beginning stages, with only 12 chapters, but the pacing is pretty good. The story, episodic in the beginning, picks up pace once the Yuga Arc starts (here, the story branches out to cover multiple characters; this is quite exciting when all the disparate plot elements start coming together). The mangakas do a good job of illuminating the setting and the locales too, which makes the story all the more engaging. The only thing I dislike is how idealistic and ignorant the protagonist is. It kind of annoys me how Sona lived for so long (~13 years?) without knowing how his world works. But I'm hoping that this problem can be fixed as the series progresses. Asides from Sona, all the other characters seem fine. Highly recommended series.
Was this comment useful?  Yes

Nice read
by SaLaHaDiN_PL
August 8th, 2011, 11:15am
Rating: 8.0  / 10.0
What can i say it's good (reading only 5 chapters) still it's kinda tough for young ones but i think it's ok for all 15+ that understand heavy subjects like arms dealing in wasteland , main hero is kid and he lost family then u can't judge him for now he is going to be a bad ass in the end if not rating of this manga will go down -2 for now 7

Ps. change it to 8 cuz it's going in good direction