Login to add items to your list, keep track of your progress, and rate series!
Description
Collection of stories

1-3.Matsumoto Kei works at a planning department in a company that runs fast-food business. One day, Iwakiri Shinji, who's a manager of the most profitable shop, fell in love at first sight with Kei. Since then, Iwakiri has started to make advances to Kei with all his might to the extent that it was like sexual harassment! Even though Kei tries to concentrate on his work to ignore Iwakiri, he was at the mercy of Iwakiri's fickle expression that goes from playfulness to seriousness...?!
4-6. Story of a demon and a doctor
7-8. Love between art student and sculptor

1-3.Matsumoto Kei works at a planning department in a company that runs fast-food business. One day, Iwakiri Shinji, who's a manager of the most profitable shop, fell in love at first sight with Kei. Since then, Iwakiri has started to make advances to Kei with all his might to the extent that it was like sexual harassment! Even though Kei tries to concentrate on his work to ignore Iwakiri, he was at the mercy of Iwakiri's fickle expression that goes from playfulness to seriousness...?!
4-6. Story of a demon and a doctor
7-8. Love between art student and sculptor

Latest Release(s)
v.1 c.1-8 (end) by Dangerous Pleasure over 11 years ago
Search for all releases of this series 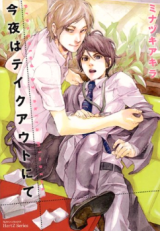 There's a lot of long comments, so mine will be short.
by kidoraku
November 20th, 2019, 12:58pm
Rating: 8.0  / 10.0
This work is much better than I expected. Through the art is not typical - it's mainly in black and white - I don't hate it. Characters are pretty, have excellent proportions and hypnotizing eyes. The lines are smooth and soft and it's obvious that sensei is a skilled artist.
There are three stories, two down-to-earth slice of life and one folk/fantasy inspired by the legend of Yuki-onna (but since it's yaoi manga there's Yuki-otoko). At the beginning there's author's note: "This is my first comic" but despite this fact, there's not much to brag about, actually it's a wonderful work for a newbie. It's great that author didn't make use of any cliche idea like teenage love on no.1 host in some expensive shop, but instead created stories with decent plot. I had fun reading it so don't hesitate, it's pretty good so go on and read it.
Was this comment useful?  Yes

--
by Oriolidae
June 17th, 2012, 1:32am
Rating: 5.0  / 10.0
Hmm... In my opinion this is like a sparrow disguised as a peacock. Uh, that came out a bit weird. This manga tries to be unique, but doesn't quite make it. The art is really interesting, and contrary to some of the previous reviewers, I actually quite liked it. The hatching on the faces made an interesting effect, and it is definitely a memorable art style. It's the story that seemed a bit thin. Of course the setting - a fast food joint - is not really average, but the story that takes place there is indeed... dull.

There's not much to experience. It's the whole stereotypical seme-uke chase with the typical roles and a boring execution. The setting is flat, the characters are flat and the relationship is flat.

The only thing worth mentioning about this manga is the art work, but that is worth taking note of.
Was this comment useful?  Yes

Great one~
by GrapeCherry
May 4th, 2012, 2:30pm
Rating: 9.5  / 10.0
I actually like how the author distinguished herself from other mangaka's by the usage of shading. Her method is unique to me and I used to be baffled whenever lines would appear on anyone's face when they were feeling embarrassed or shy, and then I realized they were blushing and thus became enthralled with her shading. It became an easy way to pick out her works from others.

My favorite story out of all three would definitively be the first one; totally too cute for me to handle. If the obsession for burgers wasn't enough to bribe me in then it was certainly the cute faces everyone had. Iwakiri has got to have the cutest facial expressions yet. He was also the source of entertainment and humor of this book. I absolutely loved him!

The second story I was a bit iffy on. I have reread it countless times and still I can't figure it out, but it's totally okay because I found the story boring to start off with. They ending, however, got me hyped.

The third story? Actually better then the second. I'll just say the uke is super adorable in this one. And when I mean adorable, I mean his reaction when he does something. His sculpting abilities are amazing, and the last page. That page. Everything in this book is amusing.
Was this comment useful?  Yes

About art in shading
by kand
November 28th, 2011, 10:26am
Rating: 5.0  / 10.0
I can go with an author using black & white only, but the clues for shades here were sometimes disturbing, especially on characters' faces. It often looks like they're crying when they're not. In the 1st story, the ink thin horizontal strokes on Iwakiri-san (the manager), particularly on his nose, make him look like he's always drunk?! And I didn't like the drawing of his eyes either, he looked rather dumb...
About the stories, I really prefered the second one (the inhuman being living in the mountain, maybe a yokai), perhaps thanks to my love for fantastic

)
The 1st story didn't convince me, but the 3rd one (the sculptors) sounded better. Anyway this mangaka's uke seems to fall very easily even though they're hetero in the first place.
I'm afraid I was a little mistaken by the cover's paintings which are quite good. I also bought "Kono Yoru no Subete" from the same author, I haven't read it yet, let's see...
Was this comment useful?  Yes

Wonderful!
by streetwalker
November 26th, 2011, 6:24pm
Rating: 10.0  / 10.0
I truly enjoyed this, much more then I thought I would actually. The three stories in this book are all really good, surprisingly. Usually when you have several shorter stories in stead of just one, they tend to be superficial and rushed but this was quality stuff!

Quite well constructed and well paced plots that were believable and interesting. The characters are likeable and the relationships are cute and fluffy. Yet the stories still manage to maintain some depth as well, not all fluff.

The first story was okay. My least favorite of these stories mostly because it was quite generic. The setting is something I've already seen a lot of times and there wasn't anything that really set the story apart plot-wise either. The sexual harrasment was kind of unbelievable too. But the characters were cute and it was quite funny.

I liked the second story best, it was the most original of the three and had a more serious feel to it. People who don't like fantasy/supenatural elements might be a bit put off by this but I thought it was amazing. I almost saw it as an allegory of loneliness and estrangement. It was deep... And as fantasy goes, not too far out there either, so it was still believable. I liked how, despite the shortness of the story, the characters' feelings still developed over time from aversity and detachment into love. And as for the relationship, there was enough lovey-doveyness to balance it all out. The characters in this story were rather pretty as well.

The third one had a nice setting, the art theme was pretty cool and not too overused. I thought the story was realistic, down to earth and sweet. The seme's pov angle was also nice. And the idea of leaving your heart behind was so romantic!

And the art, well... It's unusual. Perhaps not the pretties possible style but points for originality and it was expressive. I do highly recommend people to give it a try though!

wow so good
by juls91
March 28th, 2011, 10:34am
Rating: N/A
my fav story was the 2nd story, i thought was very good...
in the first story the art is not that it was bad but the mangaka used some shading idea it was idk, weird... but for the rest of the stories it wasnt used, i actually liked the art.
Is a good read

the art
by keristars
February 15th, 2011, 2:36pm
Rating: 6.0  / 10.0
The art style is one which uses very minimal screentone for shading and instead relies on different weights of line, solid expanses of black, and hashing to create shape and volume. It's rather different than a lot of manga, but quite beautiful. However, some of the panels can be a bit confusing at first glance, and the method of using contour drawings to define shadow and volume won't appeal to everyone.

There are three stories here, the first and last of which I liked better - I mostly skimmed the second. The first is about two men working in corporate for a fast food chain, the second is a supernatural-ish historical story about a doctor and a guy who can suck the life out of people, and the third is about an art student and the sculptor sensei he is learning from. They're all fairly average, though with their own little twists on things, and the appeal is mainly in the art, which is expressive and lovely.
Was this comment useful?  Yes

fooled
by momoasis
March 3rd, 2010, 10:17am
Rating: N/A
Don't be fooled by the cover. The drawings are mosty in black or white, no shades only distinctive lines. Somehow the charcters look a bit creepy with the white hollow eyes in my opinion. Don't expect too much from the art. The stories are ok, a bit rushed though
Was this comment useful?  Yes