Login to add items to your list, keep track of your progress, and rate series!
Description
Pai is a strange, provincial woman who has come to Tokyo from the Tibetan highlands. Somewhere in Tokyo is a young man who can help her in her quest... to become human!
When Pai finally finds Yakumo, they set off in search of the artifact that can transform her, but it will take all of her mystical powers to keep the reckless Yakumo alive, even if she has to steal his soul to protect him!

Note: Winner of the 1993 Kodansha Manga Award for Shounen. 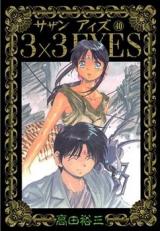 Note: You must be logged in to update information on this page.
Forum Posts Click to view the forum
Ending... [Spoiler, definitely]
over 2 years ago
Reading "3x3 Eyes"
over 3 years ago
About v31 c.01
over 15 years ago

Too long
by AndelMartina
February 3rd, 2022, 10:34pm
Rating: 6.0  / 10.0
At first, I was surprised how quicky I was reading through the chapters. Even through I was confused about the story sometimes (I kept dozing off while reading), it was past paced and enjoyable. After the second volume the feel/style of the story changed though and while not bad, the initial uniqueness disappeared and the story became repetitive. I know people said it's 40 volumes of one story arch, but the repetitiveness is really killing me. It doesn't feel like one story going from start to end, but rather a story told through side stories only. I read 9 volumes and when thinking if I should pick vol. 10 up, I decided not to and to drop the series. I have better use of my time.

In short, if you have insane amount of free time and don't mind repetitive stories, this series is pretty good. If you're a working person with little free time or don't want to read 40 volumes about the same thing, don't pick this series.

The author does a fantastic job in portraying how dangerous it would actually be if these myths existed and how being thrown there wouldn't be as fun as you'd expect , all this whilst exploring a rich mythology .

I also liked how the 3 eyes disregards time without explicitly saying it , just as it doesn't constantly explain everythig to the male MC.

In the mid 90s, I found a comic book store in San Diego selling raw untranslated Sailor Moon, & Dark Horse translated Sazan Eyes broken down into shorter graphic novels with magnified page sizes. I bought both & this was the turning point where I realized that despite being the target demographic for Shoujo, Shounen & Seinen mangas are where it's at. 3x3 Eyes was the first anime I ever bought on VHS as well.

Only coming here, to the most useful manga ljbrary on the internet, did I learn that this series has a prequel & 3 sequels/spinoffs/remakes I've never read, & that the 3x3 francise is still ongoing.

i remember this from my childhood
by Miachann
September 16th, 2020, 8:09am
Rating: 10.0  / 10.0
bruh i remember my 5 years old me reading this manga back then and idk where the manga goes huhuhu its sadd actually i really love this, i love pai too and i love the plot so much i still remember a little bit that Pai change to different persona when her 3rd eyes active but comeback like usual when the 3rd eyes closed
Was this comment useful?  Yes

Good, but...
by nail80
November 13th, 2013, 1:27am
Rating: 7.5  / 10.0
I would have been happier if they cut it by half. While the first volumes were fresh and interesting, i felt it suffered by over complicating the story. It tried to be an epic but failed in my opinion, and here's why: some arcs are just for the sake of introducing a new setting and still putting the same thing over and over. It moved the story foward a bit but were they really needed? Most of them were just puppets in the end. I liked the reapperances of certain characters and how they ended up becoming important, but by the end of it, it was getting ridiculous. And what did they accomplish at the end? Was the problem proposed in the very first chapter solved? I won't spoil but it just didn't do it for me.
So yeah, in this case less would have been much better.
It's still good but, you know...
Was this comment useful?  Yes

Pretty fun read, last few volumes are eh...
by Dr4G0nF1r3z
September 23rd, 2011, 8:38am
Rating: 9.0  / 10.0
Well, a lot of this was a really fun read, really enjoyed the synergy that the main characters had, and I really sympathized with them. <ENDING SPOILERS>
Spoiler (mouse over to view)
I was actually kinda mad at the author, Yakumo had to deal with all this constantly sacrificing himself/dying to save others, that I felt he should have survived (physically) instead of what happened to him. I guess what I mean to say is that I think after all the crap he's been through, he really deserves a happier ending; the initial goal in the story was essentially to have Pai and Yakumo become human, but neither of those goals were fulfilled. I don't know, I didn't really feel any satisfaction from that ending. I was touched by Yakumo's selflessness and determination, so I just don't feel like he got what he deserved in the end.
Ultimately it's not too bad, I enjoyed it in general but like I said, I was frustrated by the last few volumes. So so frustrated, but I really enjoyed it. Really fun read, had a blast, don't regret the time I spent on it, and I definitely recommend it. There IS a sequel though, so keep an eye out on that I guess.

It IS a 40 volume story with only practically one story arc so it might get repetitive, but I think the characters really really bring it to life. Villains are a bit subpar, if you read it you'll know why, but it really is a good read.

Good at first...
by VampireBanana
January 14th, 2009, 2:03pm
Rating: N/A
Okay, it's got quite a bit of depth, fascinating concepts and even interesting and varied characters. The Hindu mythology and other facets were quite rich and well-done. And so was the history of the hidden races. The art didn't really bother me since I've read much older stuff.

But what killed the story for me was the amount of repetitiveness and that certain characters(especially the villains) were extremely one-dimensional in a sense or basically clones of one another.

I think this story could've done just as well, with a smaller cast and less depth since the cast seemed very contrived: there were many players but their interactions were very limited and quite a few were discarded or forgotten after their roles were fulfilled.

About the depth: less is more and for 3x3 eyes, it just seemed to have layers upon layers yet little resolution was reached after 30++ volumes. With a few more volumes to the end, I wonder how they'll tie things up without busting the pacing. They would've benefited by doing side stories instead of trying to cram in every detail into the main story.

Perhaps I might read this again when it's completed but I doubt so. Even many other epic series with equal or deeper complexity tend to be far tighter and less draggy, capable of summarising massive details within a few chapters.

Too long
by Name-Undecided
December 22nd, 2008, 9:25pm
Rating: N/A
I was an avid fan about 8 years ago (how time flies) and I hit my limit in 2006. Part of it is just me getting tired of the story, another part is me not being able to keep track of what was going on due to all the breaks in scanslation. Three chapters come out, then 3 chapters 6 months later, then 4 chapters 3 months later etc. By the time the next thing comes out I've already forgotten what convoluted plot was afoot in the last installment. Initially I was just going to wait for the whole thing to come out then read it, but now I can't even be bothered to do that much.
Was this comment useful?  Yes

True Favorites
by Akujin
November 25th, 2008, 4:25am
Rating: N/A
As a kid I was really anti anime/manga and japanese culture (mostly because of gundam and dbz - god I still hate them). However the scene from this anime, when Yakumo gets drove over by a bus. Ever since I saw that scene (by accident on a lan while walking by), I've been hooked. 10+ years later, this series still remains one of my all time favorites.

I just cannot help it
by kai_alexa
June 16th, 2008, 7:59pm
Rating: N/A
The manga is rather old, and the art is not great (especially when it comes to girls), and it's really hard to understand the flow of the story. I had to read the tankoubon i bought for 4 times before i understand the story fully. However, that's just my first impressions.

After a while, the manga grows on me. There are a lot of great looking monsters, as well as creepy ones (flesh-eating slugs, ugh). The plot is the best of all, and the author is very good at blending spiritualism, history, and actions. I really love their journeys to the Kun Lun.

Characterization wise, it's also excellent. I love Yakumo for his awkwardness and protectiveness towards Pai. Though, I think I like 3 Eyes better than Pai. She's very ridiculous at times.

However, because of the rather heavy theme and repetitiveness, i've dropped it for a while now. But I know I'm gonna pick it up later. Can't help it.
Was this comment useful?  Yes