Login to add items to your list, keep track of your progress, and rate series!
Description
The era in which wandering Gods with omnipotent powers go around to enrich the land. The boy, Mauri, who was sacrificed to the dragon that visited their village is:

'Like hell I'm gonna let other guys touch him!' -God.

Watch as other surprisingly lovable and frank wandering Gods, humans, and mysterious creatures weave their stories together.

• Tokoharu no Kariudo
A story about a hunter and a bird. 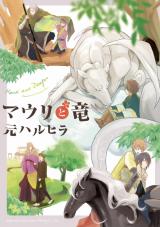