Login to add items to your list, keep track of your progress, and rate series!
Description
From Girls' Generation Scanlations:

High-school student Subaru wouldn’t reject a sexual favor, but dating is out of the question when he’s not in love. Stumbling upon a beautiful painting in school, he knows he’s found his first love – the artist behind the work. But winning the heart of his love interest isn’t going to be easy, particularly with his promiscuous lifestyle… 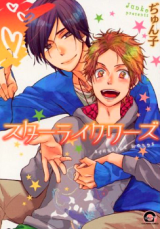 Simply cute!
by Kurarara
August 22nd, 2016, 11:28am
Rating: N/A
I have been reading and watching too many heavy stuff for a while, so this one was a really good one that put me in a good mood and just made me plain happy!
The uke was really straightforward and knew what he wanted. I loved this! It spared me a lot of unnecessary drama, and it didn't leave me frustrated! The seme was also very cute.
Junko is always great at drawing simple fluff, without adding unnecessary tragedy, in which many authors do, and when the mangaka doesn't really know how to write or play it well, the manga becomes too silly for me to handle.
Good job Junko! I read all of her work. What should I do now

Sweet
by kagayaki_kaya
July 22nd, 2015, 7:38am
Rating: 9.0  / 10.0
aah, nagayama is so cute i think. When he fell in love with subaru, he did accept it with honest and cant separate with subaru although with his chararter.
XD
#bad english
Was this comment useful?  Yes

^^"
by letterbee96
June 21st, 2013, 7:28am
Rating: 8.0  / 10.0
Well, all I can say is that this type of uke is not everybody's cup of tea. As the tags shown, the uke is a nympho so please read with caution. In my opinion, I liked the first couple. Subaru is adorable in many ways and while he's still a nympho, he did show his loyalty as well. This manga is quick-paced and is a good read to past time.

In a nutshell,
a) pretty art, good to read
b) plot was there and thats good enough for most
c) it's fun for all the fujoshis whether you're new or hardcore

I'd recommend it to anyone who just wants to pass some time~!
Was this comment useful?  Yes

Ahah
by MirayAllen
May 4th, 2013, 9:05pm
Rating: 8.5  / 10.0
Ahah. Subaru was so funny! I'm not usually into promiscuous main characters, mostly because they usually do nothing but look cool and mysterious, or downright boring. But Subaru was so, so funny. To me, the best part of the whole volume is still the beginning when he's trying to get Nagayama's attention. So far this is my second favourite by Junko, following Konbini-kun. Unlike most of what I've read from her, here I can root for the main couple, and I'm actually interested in what's going on. Such a great read. And perhaps it is just me, but I liked Mihara. I liked him from the start, ahah.

On a side note, chapter 6 was hilarious!! Again, I mean.
Was this comment useful?  Yes

Lovely read!
by Kinky-Chan
December 31st, 2012, 7:41am
Rating: 9.0  / 10.0
Okay, I'm not a fan of people who loves to sleep around or have multiple of sex friends lining up on their list but for some reason, I don't dislike Subaru at all. Probably because of his personality and character. He seems lively, sincere and all but he should try to resist his temptations. And one more thing, it's because this manga is done by Junko sensei and most of the characters drawn by sensei is likeable and none of them are hate-table!

Overall, the plot is okay, although it's not really recommendable to those who dislike guys sleeping around (I'm not a fan too, no worries) but read it for the plot. :>
Was this comment useful?  Yes

uber cute!!!
by whitespade
October 16th, 2012, 9:16am
Rating: 8.6  / 10.0
really, theres nothing for you to analyze, no great drama or angst, just very very cute, sweet, lovely couple all over each other. and that's the best thing about junko's manga, they make you float with giddiness, smile so much for the couple's antics. the sex is not that hot, but you dont care because it dont really matter when their cute faces is just too adorable. read it!
Was this comment useful?  Yes

i disagree with mangafan321
by kickassfu
September 10th, 2012, 12:19pm
Rating: N/A
@mangafan321
i disagree...i know everyone is entitled to their opinion so i can't say you're wrong but i can disagree

he is a healthy teenager, sure i don't think it's right to f*ck everything that moves but he can do what he likes after all he was single

after he started dating it's obvious to see he is not the unfaithful type...so the way you see things is kind of weird xD and i liked the manga *w*
Was this comment useful?  Yes

It was nice, but that's about it
by Justiflake
September 4th, 2012, 7:30pm
Rating: N/A
Having read the whole volume, I can say it's pretty much the usual type of thing you'd expect from Junko. The art is nice, plot is entertaining enough, but it's nothing outstanding.
Unless you have a problem with the MC being promiscuous, you'll definitely enjoy it. Just don't expect much from it and enjoy the pretty drawings.
Was this comment useful?  Yes

The plot in this is cute (promiscuous guy looking for love and finding it in a weird place). And the beginning scene made me crack up!

It's cute, humorous, has really lovely art, and really great emotionality and characterization.

I love both main characters, both the noisy one and the quiet one. And I thought it was so cute that the quiet one expressed himself in art rather than words (he wasn't very good at conveying emotions verbally), and that the noisy one got that right away and could read it. <3

I would read this again. And I don't know if there's more - it seemed pretty complete to me.
Was this comment useful?  Yes