Login to add items to your list, keep track of your progress, and rate series!
Description
Sequel to the novel River's End (Novel).

Yorozu lives in a love hotel. When a film crew comes to the hotel to make an AV, he has an encounter with Togame, the director. On the first day, Yorozu is asked to be a substitute actor and has his pants pulled down; it was the worst first impression ever! To make matters worse, he's worried about the openly gay Togame getting close to his younger brother, Satoru. Yorozu takes action and tries to keep Togame away from his brother, but... 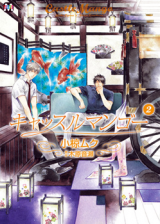 Sweet & Heartwarming
by Sunfae
November 20th, 2020, 8:52am
Rating: 8.0  / 10.0
Such a sweet and heartwarming story, eve though it was rushed by the end and kinda lost the charm it had in the first chapters. It certainly had potential being explored more deeper. But nonetheless, it was cute and I'll probably read it again.

nice start, way rushed ending
by gwkimmy
December 16th, 2018, 8:03am
Rating: N/A
I thought this manga paced itself pretty well in the beginning, but the ending seemed to rush to try to get the characters back together, which is really annoying. I felt like that time skip was there only to have Togame not deflower Yozoru while he's still a minor, but they were already making out and stuff, so did it really matter? I feel like Togame's character isn't explored enough, especially in terms of his insecurities on being older and gay. Along the same lines, Yozoru's character isn't resolved entirely since we don't get to see him succeeding the family business or maybe aiming to create a new hotel entirely. I felt like there were a lot of little plot things left unsolved in favor of throwing the characters together before the finale.
Was this comment useful?  Yes

ohhhh~~
by Maria-Ayako
January 24th, 2017, 7:49am
Rating: 8.7  / 10.0
After finishing this, i feel so sad. They went a long way to get to be together and happy. The second half was mostly sad, so i was happy that it ended well after the time skip in the last chapter. But i wanted to see more of them being happy together. Still seeing that they lived together at the end, was really nice. This should have been longer, showing more happy things. And more smut

Anyway it wasnt how i expected it to be, it was more deep and felt real.
Was this comment useful?  Yes

Definitely Creative and Delicate
by toastmuncher
December 20th, 2016, 8:57am
Rating: N/A
Love hotels, and pornography, and young boys are a delicate topic to deal with. Especially, when the young boy in question owns the love hotel and aspires to run it beautifully in the face of the stigma he faces.
The story is nicely done, the ending could use a bit more of work, and some more insight into Yorozu's character development would have been a lot more interesting, rather than just jumping the gun.
Maybe a chapter from the mother's point of view, or the younger brother's, to exemplify Yorozu's character.
Was this comment useful?  Yes

I regret not reading this sooner
by JHax9999
July 30th, 2016, 6:02pm
Rating: 10.0  / 10.0
This is not the sleazy manga I thought it would be. I read the synopsis and thought it was going to be one of those souless, smutty, sex-filled yaoi manga with no substance. In actuality, it has a compelling story, a thoughtful message, and two complex, likeable leads that you can't help but be invested in. I completely understand how and why they fall in love. Not every manga can pull this off. This one does it exceptionally well. The main couple have awesome chemistry that builds and builds with every encounter. I would absolutely recommend this manga.

Captivating
by rae2blue
May 13th, 2015, 6:22pm
Rating: 8.5  / 10.0
I was pleasantly surprised by the depth of this story. The characters were well developed and the story well paced. I especially loved the relationship development between the two MCs. My only issue is that the ending seemed to be a much faster pace then everything else but it was still satisfying.

Confusing
by hotarusasaki
December 4th, 2014, 9:42am
Rating: 7.0  / 10.0
I found the first three chapters or so ultra confusing and I didn't see the bit described in the blurb, maybe cause I read too fast though, I don't know. Either way I kelt on reading and I liked it, the total air that the manga gives off and the art style is very nice. I like the mellow and unknown mutual love and seeing them realise that they were both in love in the end. It was a really nice read.
Was this comment useful?  Yes

A great find!!
by Rebekahs5
October 9th, 2014, 4:09am
Rating: 9.7  / 10.0
This little gem is sure to please. Despite its rather 'tame' bedroom scene, this maga has definitely made is way onto my top yaoi list. It displays beautiful art, a great plot and unexpectedly takes hold of your emotions. Overall a fantastic yaoi manga that I recomend for those looking for a great romance with a little angst and progression.
(I took 0.3 away, only because the bedroom scene was a little too tame for my tastes haha)

Pretty good
by ariminty
August 17th, 2014, 5:55am
Rating: 8.0  / 10.0
I enjoyed this read. None I'd the characters annoyed me that much, and I felt that they were relatable (in a way). I think it would have done well to expand over another volume which would have probably improved the manga even further. I felt like the protagonist's emotions weren't clear enough at the beginning, so I could only get into the manga after I reread the first chapter (or else all the events felt too sudden). Definitely recommend this one, though.
Was this comment useful?  Yes

Great!
by Ifra12
July 1st, 2014, 12:39pm
Rating: 10.0  / 10.0
It starts off a bit slow but once the main plot has been established over the first couple of chapters, it gets really good. In my opinion, the main couple are quite unique and original in their personalities, as is the whole manga. The plot is really interesting and not cliche, though as mentioned at the beginning of the review, its a bit of a slow start which is okay I guess because the rest of the manga makes up for that. Was a really good read and more realistic than most yaoi manga, in my opinion