Login to add items to your list, keep track of your progress, and rate series!
Description
From MegKF:

Because of her fathers job, Aki was raised in England. So when she moved back to Japan she was teased horribly for being "foreign". Now Aki is also a very beautiful young woman, which makes it even harder to make friends and be accepted. After the coolest boy at school starts taking an interest in her, things only get worse. As jealous girls start to harass her, Aki shows a side of herself that even she didn't know about. 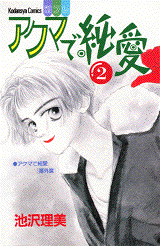 love it!
by whitespade
August 5th, 2015, 3:16pm
Rating: 8.4  / 10.0
i love that the best guy win in this manga. a lot of modern shojo have the 'cool' guy win regardless how assholish they are, but this time the guy with the most interesting personality win, so i like that. i like the art, even if you are not into the old school art, it is still acceptable. the comedy is also fine, standard for old school shojo.
Was this comment useful?  Yes

Not Bad
by Molenir
November 20th, 2009, 6:51am
Rating: N/A
Manga is fairly short, only 2 volumes, and its not bad. Quite a bit of humor with the multiple personalities switching back and forth. The bullying was rather bad, but when the strong Akiko comes out, and bullies back, it turns a negative to a positive.

Overall, short and fun little story, if a bit silly.
Was this comment useful?  Yes

STUPID
by MissRaw
September 27th, 2008, 12:44pm
Rating: N/A
Why do Japanese think that being born or raised in Europe or America is like being superior than anybody else (despite the fact that they're being bullied)? "A pretty woman wouldn't be able to understand our feelings," makes me laugh so hard!! Nobody would truly say that in the real world... I mean c'mon. How cliche and stereotypical.

In the manga world, being beautiful and kind makes you a heroine, and being ugly makes you an antagonist (because jealousy will arise). Sometimes being too beautiful can make them an antagonist because God forbid, somebody else steals the spotlight! *shakes head* Why can't they just be normal girls with normal feelings?

i see
by blueseeker
April 13th, 2008, 10:01am
Rating: 8.0  / 10.0
I felt the need to read this one because it seemed to appear wherever i looked and some people seemed to have diverse opinions on it. The story in itself is entertaining but more than a good manga i would say is a bit of a comedy, of course putting aside all of the drama that comes wtih the bullying....true enough the bullying is mixed with the comedy so is not as dramatic as one would think and i just love about the split personality part. The art leaves a lot to be desired but it's quite old so i guess it's ok.
Was this comment useful?  Yes

Overall Review
by holy`bell
July 13th, 2007, 12:28pm
Rating: N/A
Can't say I like this manga that much. The harassment drags out too much; from the middle of the first volume to the end of the second volume.

Spoiler (highlight to view)
If you talk about how little/great the harassment is, it's harsh alright. I could not stand it and had to end the first volume from there. Even skipping a few chapters or so in the second volume, it would not end until the very last moment of the volume.

I believe it could have been shortened. Other than that, I didn't mind the artwork as I found it okay.