Login to add items to your list, keep track of your progress, and rate series!
Description
From: Easy Going Scans
There are gamblers out there who even bet their lives as ante. But to secure the integrity of these life-threatening gambles, a violent and powerful organization by the name of “Kagerou” referees these games as a neutral party. Follow Baku Madarame a.k.a. Usogui (The Lie Eater) as he gambles against maniacal opponents at games – such as Escape the Abandoned Building, Old Maid, and Hangman. 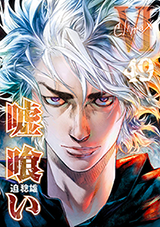 Note: You must be logged in to update information on this page.
Forum Posts Click to view the forum
OVA release for usogui!!!!
over 8 years ago

Actually a good gambling manga
by eclipse9
March 27th, 2020, 9:24am
Rating: 9.5  / 10.0
Basically lots of mind fuckery with a splash of action.
And gambling in this case is not just limited to your average casino poker games etc. But has other interesting games all of which the stakes are high.

Might get confusing at times and I need to re-read some parts but I don't mind that.

Overall a very worth while read which kept me occupied for a few weeks.
Was this comment useful?  Yes

Unlike other gambling manga, Usogui is more realistic in terms of power play and politics. There is an emphasis that even if you win the gamble, if your opponent can force his violence on you, he could forcefully steal your winning (or even kill you). That is why in this manga, violence is inseparable with the gambling, making the dynamic much more intricate and interesting.

This manga might not be for everyone. The author do not try to dumb it down to make it easier for the reader to understand. So sometimes, we have to reread the arc to fully understand the story. So, my advice is read until the end of Hangman arc then reread that arc. If you don't find it engaging, then maybe it's not for you..
Was this comment useful?  Yes

I did take a small break during the tower arc but ended up marathon my way to vol 29. Now, I'm more intrigued than ever by the man we call an enigma. The bits and pieces of the story that initially seemed to be just buffers were in fact clues and motifs that lead up to a larger revelation. Although, it was only a small glimpse into Madarame's past, I will still give my applause to Mr Toshio for masterminding that brilliant plot twist which I did not see coming. At the rate the story is unfolding I hope more mysteries will be unraveled soon.

Akagi Meets Kaiji With Better Art
by McCamyTaylor
February 27th, 2013, 1:43pm
Rating: 9.0  / 10.0
I have read up to volume 8, and so far this manga is very entertaining. Imagine that Kaiji meets Akagi, and Akagi decides to use/help/both Kaiji while he (Akagi) pursues his own agenda (the nature of which is not yet clear). Baku is much like Akagi in that he functions as a kind of Buddhist demon who defeats his flawed opponents by exploiting their attachments/weaknesses. Kaji is Everyman---torn between conflicting desires but basically good hearted.
Was this comment useful?  Yes

so far so good
by ryousaki-sama
September 8th, 2011, 12:12pm
Rating: 10.0  / 10.0
The art takes getting used to since it has a lot of this and that, but it's a pretty good idea [gambling, assassins,a really smart and hot guyxD] well i think so , idk bout you guys^_^ can't believe this manga hasn't gotten more reviews. anyways, dont get fooled by the art, dont judge guys, this manga is pretty kick-ass and the main character is someone you'll most likely root for.

He has his moments

<3
anyways, i love this type of mangas were the main character is known by everyone as someone famous, and he's like a legend and he's a super genious when trying to defeat his enemies with mind-games

love it , keep up the good work

nice
by takitogr
May 14th, 2010, 9:53am
Rating: 1.0  / 10.0
anxiously waiting for new releases from this one....really good but it deceived me in a way...it started really intelligent and witty and then it turned into a slasher...i guess it's way too early to judge it now...i hope for something more than a slasher on the next gambles but that doesn't mean it's bad...it just started way differently

EDIT: after reading 37 chapters
god, this became abysmally bad....the artwork, the story, everything! i'm dropping this

Nothing mellow, lots of texture and extremely enjoyable to read
by xehuei
January 13th, 2010, 2:56am
Rating: 8.2  / 10.0
If you are a fan of Hunter x Hunter's Hisoka then this is the manga for you. To lie and to being lied to, the world of usogui is full of deceptions; we the readers are no exception when it comes to being deceived. We know nothing of the intentions of Madarame despite of him being the main character. We gain very little insight into his thoughts, yet his characterization is build up by the evaluations given by his enemies and comrades. Everything here is about ambition and added to that is a dose of dark humor; and this is what I enjoy about this manga. Most people here would compare this to liar game or kurosagi and people would agree with me when i say this has more texture.