Login to add items to your list, keep track of your progress, and rate series!
Description
1) Love & Trap
After being bullied at elementary school, Mochida 'Maki' Masaki learns to use his own body to enchant and trap the most powerful person at school to protect him from potential bullies. However, a chance train encounter sparks a complicated friendship with notorious classmate, Aihara Ryuuji, which soon changes Maki's life and ultimately his view of love.

2) Love & Honey
Maki begins to question the point of his relationship with Aihara.

3) Love & Whip
Maki discovers that Aihara's cousin, Aihara Kaede, has a thing for Aihara and a bit of contempt for Maki.

4) Love Blood
Sawaguchi Mirai... More...
1) Love & Trap
After being bullied at elementary school, Mochida 'Maki' Masaki learns to use his own body to enchant and trap the most powerful person at school to protect him from potential bullies. However, a chance train encounter sparks a complicated friendship with notorious classmate, Aihara Ryuuji, which soon changes Maki's life and ultimately his view of love.

2) Love & Honey
Maki begins to question the point of his relationship with Aihara.

3) Love & Whip
Maki discovers that Aihara's cousin, Aihara Kaede, has a thing for Aihara and a bit of contempt for Maki.

4) Love Blood
Sawaguchi Mirai takes a train to the countryside to get away from his own life, and unexpectedly finds love.

5) Us, Blooming
Now working at a flower shop, Murakami Takashi is very set on winning the heart of Sakurai Ryui, the beautiful object of his secret and burning love, but his pervy manager, Fujimori Haruhiko, keeps getting in his way.

Latest Release(s)
v.1 c.1-5 + Extra (end) by Dangerous Pleasure over 13 years ago
Search for all releases of this series 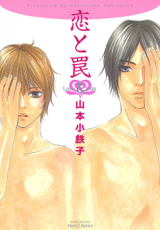 The main story is pretty bad
by HoshiSama
June 21st, 2020, 6:33pm
Rating: 4.0  / 10.0
Honestly the main story was pretty bad. There’s no character development and no real conflict. I found no part of it compelling. Not even the sex scenes were good.

The second one-shot was pretty typical, and didn’t stand out at all.

Overall, I’d skip it. There’s a sequel to the last one-shot but I think even if you wanted to read that you could skip this and you wouldn’t be missing anything.

....
by MirayAllen
June 24th, 2013, 4:34pm
Rating: 8.0  / 10.0
Chapter 1-3: Aihara and Maki's story
I couldn't stop reading and I really thought there was more of them. I liked them both, really. Such entertaining characters. I liked that Aihara was, truly, a gentleman, and not some hormone-driven sex-machine as is usually the matter; Maki too was a compelling uke, very true to himself no matter the circumstance (yes, even at the very beginning) and I loved that he wasn't a wuss. Because he feels pressured easily and he has a very low self-esteem, it follows naturally that he can't value himself favourably and he ends up misjudging his own strength. In more than one occasion though we get to see him fight. Good for you Maki, I love you. Fufufu. Overall, it was quite a satisfying read. The only downside was the third-wheel, the cousin: did not see his point, did not like his personality. Why are the side characters so damn predicable with Yamamoto-sensei?

Chapter 4 (Mirai and Gaku) and Chapter 5 (Us, Blooming) were too short for me to say anything specific. Be it as it may, out of the two, I liked Chapter 4 better. The characters were much more interesting and unique, if underdeveloped, and this was the plot which called for a sequel, not the one with the flower shop. In chapter 5, although I liked Haru and Ryou, Takashi was too flat and boring, not deserving of the lead. I won't be reading the sequel, that's certain.

Overall a very nice read, especially for the main story and the art which gets better and better.

Us, Blooming
by Mochi__x
December 22nd, 2012, 3:06pm
Rating: 8.0  / 10.0
The main couple from chapters 1-3 were fairly shallow and the whole romance was rushed, with a typical love-rival being thrown in during the 3rd chapter to stir things up. All very cliche -- which isn't always a bad thing, there is a lot of good BL that uses the same old plots, but to be honest this just fell flat. Yamamoto-sensei usually delivers such unique and wonderful stories that I was just left feeling disappointed by the end of these 3 chapters.
Chapter 4 was fairly nice, although Chapter 5 is definitely the highlight of this collection. "Us, Blooming" is a prime example of why I usually love Yamamoto-sensei's work; it's entertaining and light-hearted, and left me wanting more. Thankfully there is a sequel ^__^
So my rating of 8/10 is for chapter 5 only.
Was this comment useful?  Yes

Great!
by Namiya
July 20th, 2011, 6:32am
Rating: 10.0  / 10.0
I loved all of the works by Yamamoto Kotetsuko so far, they're beautifully drawn, they have the right amount of romance, drama, ect; I really get to love the characters each time and the stories just make me feel good.
In this manga, I liked the main story a lot and the couple was just so sweet together!
I was also excited to read the prequel to Mankai Darling, which I've read before this, and it was nice to see what happened to the characters right before Mankai Darling started off,
Spoiler (mouse over to view)
even though it seemed a bit rushed that Takashi was in love with Ryou before and then switched to the manager within like a day.
STILL, the manga is great!
In the end, all my expectations on Yamamoto Kotetsuko's work have been fulfilled by this manga.
Was this comment useful?  Yes

:D
by fancyultrafresh
February 11th, 2009, 2:44am
Rating: 7.0  / 10.0
The stories weren’t anything special, but they were simple and sweet. The characters could have been developed a little better, too. A few more chapters dedicated to the main couple would’ve been nice. Their ‘relationship’ happened way too quickly, in my opinion. Then again, I’m easily pleased when it comes to yaoi. If I like the art, then i’ll read it, regardless of if it may have a horrific plot :3

Koi to wana...
by ese
January 20th, 2009, 7:23am
Rating: 8.6  / 10.0
I started to like Yamamoto Kotetsuko's works after finished reading Brothers and this one is just sweet and easy to understand. It's not confusing. I like all the stories and I thought 1 volume isn't enough but, overall it's still ok i guess. Well, i don't really mind with cliche plot and the art is fine too. Maybe, i'm just typical

It was alright
by lovebaby
December 30th, 2008, 9:21pm
Rating: N/A
What can I say, if the arts weren't so gorgeous, I wouldn't have given it a six out of ten.
Love & Trap, the story about the relationship between Masaki and Aihara is not exactly enjoyable. Their relationship develops from perfect strangers into lovers too quickly and without any real depth. After meeting Aihara a few times, Masaki develops feelings for him without much of other interactions. The relationship seems unreal and shallow. Don't get me wrong, other yaois have the same problem in development of relationship, but Kotetsuko didn't seem to put much into it compared to other works I've read. What irks me even more was the jealous cousin in Love & Whip. He was the typical third wheel that yaoi artists plunge into between lovers just so the lovers can have hot, steamy make-up sex later. Kaede is annoying and really unnecessary in the story. In the end, there isn't really a resolve for the relationship between Kaede and Aihara.
Us, Blooming was a little more enjoyable. Still, I question why the manager makes his move on the new worker so fast, although they have not had any real interaction before.
Personally, I liked Us, Blooming than the story of the main couple, which was rather cliche and boring.
Was this comment useful?  Yes

confuse...
by satani
December 28th, 2008, 9:35pm
Rating: 4.0  / 10.0
Well, this is the first manga I read from Yamamoto sensei.. I felt a bit weird, confuse, and.. disappointed, nothing sure about Maki & Aihara's relationship, only lust and body attract toward each other? I wonder how long they'll last...
Was this comment useful?  Yes