Login to add items to your list, keep track of your progress, and rate series!
Description
Kaname and Shiba return. Kaname's failing test scores get him a scolding from Shiba, who decides they won't meet up until Kaname passes the test. If Kaname wants the romantic Christmas of his dreams he needs to work hard!

Latest Release(s)
v.1 c.1-4 + Extra (end) by Dangerous Pleasure over 13 years ago
Search for all releases of this series 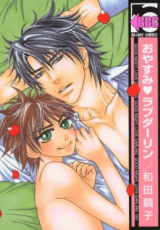 Alright
by OmNom
September 8th, 2013, 10:27am
Rating: N/A
LOL the cover art is totally misleading. This reminds me of Tear Drop, another manga with a terrible cover. However, in comparison to the latter which has an equally bad content, this manga is actually rather average, even decent at some points. Although I do think its quality has improved in some aspects compared to its prequel I can't say I enjoyed reading everything from beginning to end. I guess out of everything this manga has to offer, Kasume's personality and the mangaka's chibi drawings of him are the only "X factor" that made it more enjoyable for me.
Was this comment useful?  Yes

Much better than the prequel
by Namiya
January 15th, 2013, 12:10pm
Rating: 9.0  / 10.0
The prequel was okay but since this couple only had one or two chapters, there was quite a distant feeling I had toward the characters. It was very shallow and indifferent.
Here, you get to see a lot of different, new sides of both characters and they got so much more depth!
I love the art, the stories are cute, sweet and sexy.
It's true that the color screams Shota but the boy is actually 15 and in the manga itself he looks a bit older than the cover too.
Looking at it realistically, I'm not sure how I like the pairing, given it's a 15 year old very childish little brat and a 30 year old divorced police officer. I can't help but think they wouldn't actually get along very well, but it's still okay in this manga.
Next are stories of the two older brothers of Kaname. Homare is 19 and hooks up with a 31 year old... and the eldest brother Akira is probably dating a dude as well.
Talk about forcing all characters within a family into homosexuality!
I'm torn about that stuff. I'm against making whole families gay just for the sake of the manga... no I have absolutely nothing against homosexuality, but it's just not realistic to have 3 brothers, their cousins and their dads all gay (which actually happens in yaoi). But on the other hand, when I read a story I really want to know more about the side characters. And since this is yaoi, a side story about a brother's relationship with a woman wouldn't fit in... so...

Well either way, I liked it a lot, and I'd recommend it to pretty much anyone who is looking for a sweet read with hot men and pretty good sex scenes but not much story progress.
Was this comment useful?  Yes

The art, the facial expressions, THE SEX SCENES
by supmaguire
October 2nd, 2012, 1:12am
Rating: 9.6  / 10.0
are FANTASTIC. There's just something about the characters' facial expressions...Wada-sensei makes them cute, funny, sad, AND RIDICULOUSLY SEXY. Phew, I needed to fan myself during some of those sex scenes, lawdy. The arrangement of the scenes and the general outlay of the manga was fantastic too. And generally, that's not something I notice/am picky about. But the sex scenes in Oyasumi Love Darling are arranged so well, that I couldn't NOT notice it. The editor did an amazing job on this one.
Was this comment useful?  Yes

Ignore the cover art!
by Mochi__x
August 11th, 2012, 3:06pm
Rating: 8.5  / 10.0
I agree with the other reviewers, the cover art looks like shota but the actual manga isn't like that. Yes Kaname is a teenager and Shiba is twice as old as him, and admittedly during their sex scenes Kaname appears to be even smaller than when he's clothed, but it's not creepy like shota. Anyway their relationship is so sweet, and I'm glad that we got to see them progress in this sequel, especially as we saw from Shiba's POV too at times. I also loved the little side-story about the other couple! (I won't say who they are as that would spoil it, but it's very cute XD) Adorable and fluffy story, very light read :]
Was this comment useful?  Yes

Kaname is just...hilarious xD his rubbish blindfold actually turned into something quite decent

although the story is not completely serious, it's quite light and fluffy. Since I like light yaoi that doesn't overdose with sex. ^^
Was this comment useful?  Yes